Trump made clear, Defense officials said, that he wanted the Pentagon to push back forcefully against protests in the nation's capital. The decision is "all POTUS," one Defense Department official said, using the acronym for President of the United States 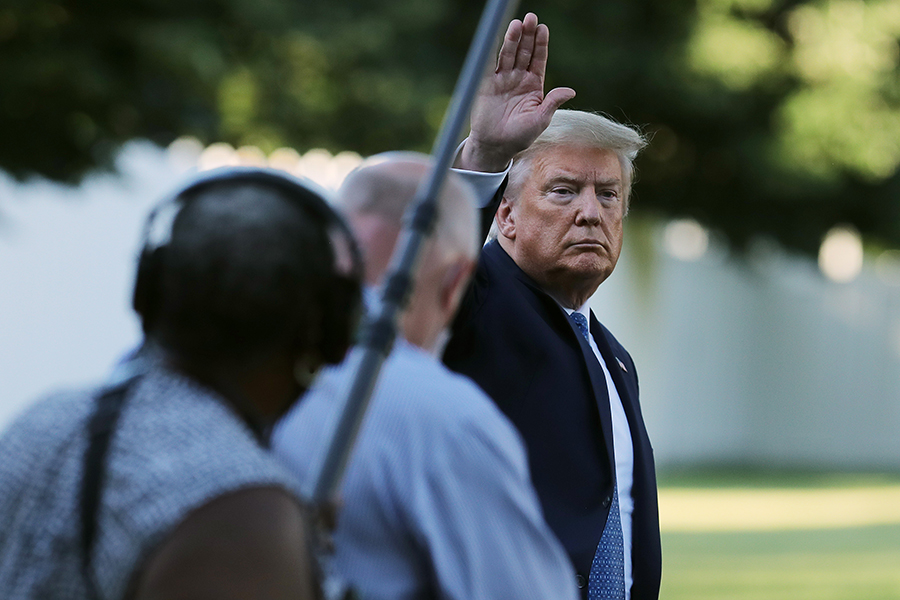 In his first remarks from the White House since massive protests have swept the country, President Donald Trump said Monday evening that the looting and violent demonstrations in reaction to the death of George Floyd in police custody were “acts of domestic terror.”

A week after Floyd died in police custody in Minneapolis, daytime demonstrations focused on racism and police brutality are increasingly giving way to violence and chaos by night, fueling tensions over the direction of a protest movement that has unfurled in sprawling fashion in dozens of cities across the United States.

Several people have been killed or wounded in shootings linked to the unrest, and looters have raided neighborhood shops and upscale commercial districts from Santa Monica, California, to Boston, as a sixth day of largely peaceful protests descended into lawlessness.

Trump said he was among the Americans “rightly sickened and revolted” by the death of Floyd. But he spent most of his highly anticipated address presenting himself as a law and order president. “If a city or state refuses to take the actions necessary to defend the life and property of their residents, then I will deploy the United States military and quickly solve the problem for them,” he said.

Just after Trump concluded his speech, military police from the National Guard clad in camouflage and riot shields surged in front of a line of law enforcement officers pushing protesters back from the mouth of Lafayette Square outside the White House.

Police officers used tear gas and flash grenades to clear out the crowd so Trump could visit the nearby St. John’s Church.

The president’s church visit was criticized by Bishop Mariann Edgar Budde of the Episcopal Diocese of Washington, who said she was “outraged” that Trump went to the church “after he threatened to basically rain down military force.”

The unrest and the race to control it have come when the country was already grappling with a pandemic that has killed more than 100,000 people and an economic collapse that has put millions out of work. National Guard troops have been deployed to help overwhelmed police departments in about half the states, and dozens of mayors have imposed curfews in the hope of heading off violence. A military police battalion has been assigned to help secure the nation’s capital.

Washington, D.C. is the one jurisdiction where the Army can deploy without needing approval from a governor.

The deployment of the military police unit — some 200 to 500 troops, from Fort Bragg, North Carolina — is a sharp escalation in the response to riots and protests that have erupted in the capital.

Other jurisdictions have spurned such assistance. Gov. Tim Walz of Minnesota declined Trump’s offer of military police to respond to protests in his state, and other governors followed his lead, instead choosing to rely on their own national guard troops.

Trump made clear, Defense officials said, that he wanted the Pentagon to push back forcefully against protests in the nation’s capital. The decision is “all POTUS,” one Defense Department official said, using the acronym for President of the United States.

The deployment, first reported by CNN, will be to provide security, not law enforcement, Defense officials said, but it is unclear how the two functions will remain separate.

On Monday afternoon, Terrence Floyd became the first member of George Floyd’s family to visit the place in Minneapolis where his brother lived his last conscious moments. He had said in a television interview earlier Monday that he wanted to feel George’s spirit after days of feeling numb.

But Terrence Floyd, wearing a face mask with his brother’s face on it, also had a message. He understood people were upset. He doubted those protesting were half as upset as he was. Yet what he had seen in recent days troubled him.

He said the cycle of anguish, protest and destruction that has followed many police killings has not changed the country for the better. Instead, he said, people should inform themselves and vote.

“Educate yourself and know who you are voting for,” Terrence Floyd said. “That’s how we are going to hit them. Because there’s a lot of us.”

A series of memorial services for George Floyd will be held this week and next week in Minnesota, North Carolina and Texas, followed by his funeral in the Houston area next Tuesday, the family’s lead lawyer said Monday.

Floyd, 46, was born in North Carolina, grew up in Houston, and moved to the Minneapolis area a few years ago.

On Thursday, a memorial service for Floyd will be held in Minneapolis from 1 p.m. to 3 p.m. On Saturday, another service will take place from 1 p.m. to 3 p.m. in North Carolina. Next week, on Monday evening, a public viewing is planned for Floyd in the Houston area, followed by his funeral at 11 a.m. the next day, said the lawyer, Benjamin Crump.

The funeral arrangements were announced Monday at a news conference at which representatives for the Floyd family revealed the results of a private autopsy, which found that Floyd’s death while in police custody was a homicide. His death, the autopsy concluded, was caused by asphyxia from neck and back pressure that led to a lack of blood flow to the brain.

Later Monday, the Hennepin County Medical Examiner’s Office in Minnesota released its report on Floyd. It also ruled his death a homicide, but differed with the private autopsy on the causes of death and other important complications.

Earlier Monday, Walz told reporters that the memorial service in his state Thursday would be a “significant event,” for Minneapolis and the country, “to watch that process of celebrating a life that was taken in front of us.”

In Houston, the police chief, Art Acevedo, who has marched with demonstrators and changed the Houston Police Department’s Twitter profile picture to an image of Floyd and the hashtag #JusticeForFloyd, said he offered to have his officers escort the body.

“We’ve reached out to the family,” Acevedo said in an interview Sunday. “Depending on their plans, if they need help with the movement of the body, we’ve offered to provide that security.”