We need to bring emotion back into food: Heston Blumenthal 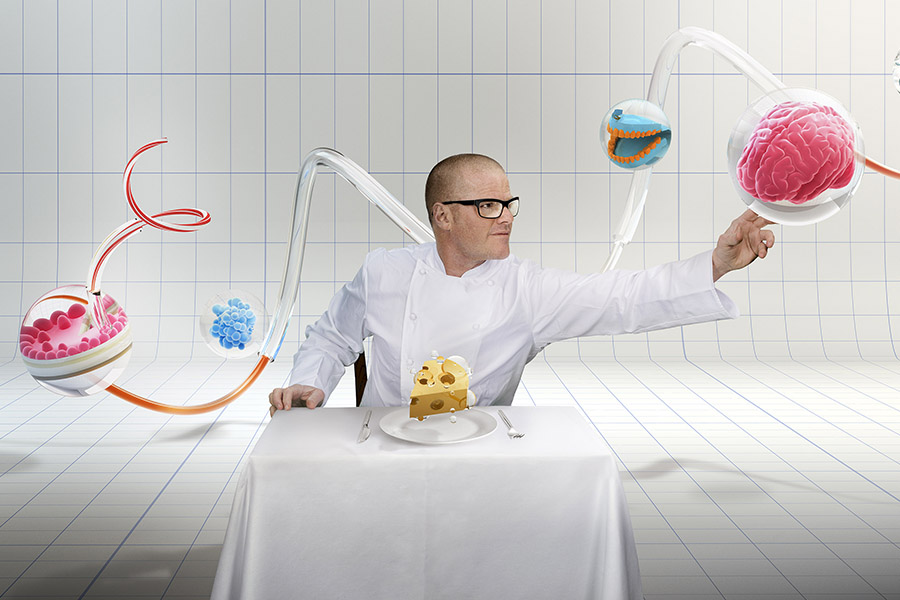 He created ‘meat fruit’, lickable wallpaper, and a show-stopping levitating dessert called ‘Counting Sheep’, which featured on Masterchef Australia’s final pressure test last season. British celebrity chef Heston Blumenthal, best known for his alchemic approach to cooking and modern inventions with food, brings his chops to India this weekend. He is the owner of The Fat Duck, an English restaurant awarded three Michelin stars and voted the World’s Best Restaurant in 2005, and also a clutch of other prime establishments.

In association with Marriott International, Blumenthal will create special culinary experiences in Mumbai and Delhi as part of the hotel chain’s ‘Masters of Marriott’ programme, featuring some of his signature dishes. Ahead of the event, Blumenthal sits with Forbes India to discuss food, philosophy and everything in between.

Q. You are the master of molecular gastronomy. Where do you think this style of cooking goes from here?
I haven’t read that it is going anywhere. It isn’t a fad. My cooking is about using food and the senses to tell a story, and most importantly, to generate emotion. There’s nothing that comes after emotions, except being alive. And while we are alive, we’d like to stay as happy as possible‐‐blissful and nourished and fulfilled.

Most people are incredibly ignorant about what molecular gastronomy started off as, and now what it has morphed into. Physics happens in the kitchen, chemistry happens in the kitchen, biology happens in food, and history is a record of that. So a recipe is history. The action of chopping up ingredients is physics; as particles react and generate new flavours, that’s chemistry; eating it is biology. We evolve, that’s history.

For me, molecular gastronomy is a different world. Instead of putting emotions into food, now, many people are desperate to go all mouth in their trousers.

Q. Back in 2006, you and some top colleagues wrote a charter on modern cooking for young chefs. What would you like to add in it now?
Author Harold McGee and I wrote that charter, and I asked chefs Ferran Adria (of ElBulli), Thomas Keller (of The French Laundry and Per Se) and Neil Perry (Australian chef) to sign up for it. Over the past five years, Harold and I have been talking of writing another one. I agree with everything that I’ve written there, but things have moved on a lot since. Now, my world is about a human being’s relationship with food. And it’s an emotional relationship.

For instance, I think of the lifecycle of going from a tree, to an ingredient, to a chef’s kitchen and on to a plate. What impact does this have?

Physically, we can measure things, and as human beings, we want to be able to point a finger at these measurements—it’s a defence mechanism. So we are always saying ‘eat this’, ‘don’t eat much of that’, and so on. Of course, there are certain things we should all eat less of, but what I want to do is put the ‘being’ back into ‘human’.

For instance, if you’ve had a great day and I’ve had a miserable day, the health effect of the same fast food can be significantly different—and negative—on me versus you, depending the emotions we are both experiencing. If we can teach kids at school an awareness of these emotions, it would make a huge difference. We’re not feeding our outsides, but our insides. That’s what my world is about now.

Q. The global restaurant industry is going through a churn, facing mounting financial losses. What can be done to bring it back to its feet?
It comes back to what we were talking about—we need to simplify things, and build a story around it using our imagination. For example, I believe the paleo diet did not work for one main reason: We didn’t factor in that in the paleo part of time of evolution, we were having to hunt and gather. We don’t do that now. We pick up the phone and get a pizza delivered. Our systems aren’t built like that anymore.

The last 2000 years have been controlled by men—we have created the laws and the moral standards. In fact, we are hanging on end to our usefulness on this planet. All we had was a better sense of direction than women, but now we have GPS. The complexity of the female ability to perceive people, and smells, is much more evolved—and it’s time to leverage that. We should study that in order to fix food shortages, which also leads to high restaurant prices, financial struggles, and so on. Let’s make the story create.

Q. How relevant are Michelin Guides and Best Restaurants lists to you?
For me, you can’t have a best restaurant. The word ‘best’ and ‘perfect’ are linear. In a 100-metre sprint, the person who runs the fastest is the best. That’s a measurement of time. But you can’t have a ‘best hamburger’. You can have your favourite, and it might change from one day to the other—that’s the beauty of food and its link with emotion.

The Michelin guide, however, is more relevant than it’s ever been. The World’s 50 Best Restaurants has been fantastic in gaining access to global cuisine. They opened it up to young chefs who perhaps wouldn’t otherwise be recognised.

The Michelin guide was devised by the tyre company to sell their maps—1 star was worth a stop, 2 stops worth a detour, and 3 stars was special—you could plan your trip around that meal. But in this guide, 3-star restaurants are not necessarily ‘better’ than 1-star. The 3 stars makes you work harder for your reward, because you travel further and it’s often more expensive. But you could also have street food that was the best meal you’ve ever eaten.

Q. What’s the weirdest thing you’ve ever cooked?
Oh, I’ve cooked a lot of weird things, but I’ll have to say….Leeches. From an old Transylvanian recipe, leeches fed on goose-blood [shudders] so they’re puffed up. It wasn’t one of my favourite things—one of those things you do for TV!