How Goan food is getting a facelift

Forbes India explores the resurgence of the state's cuisine, as reimagined by chefs 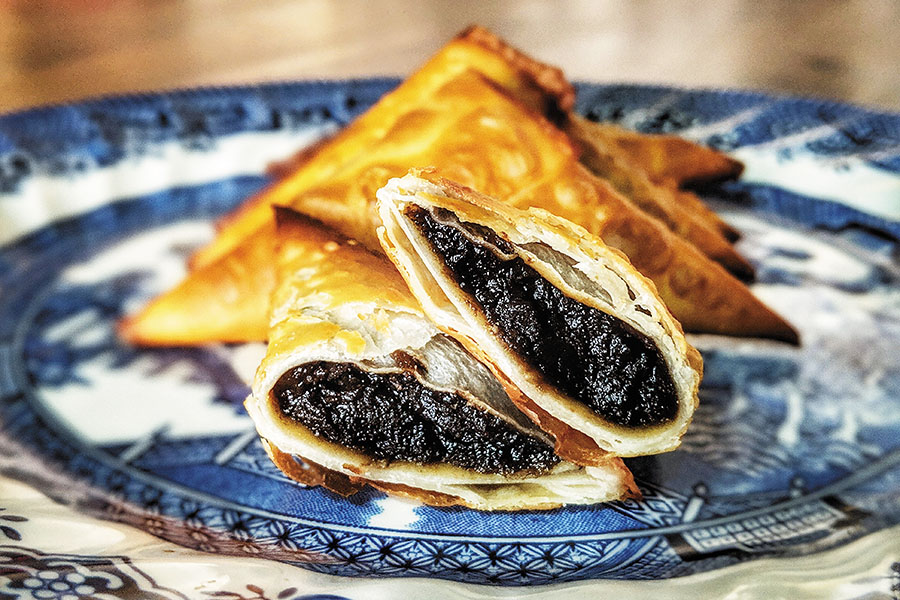 Dodol Samosa
The mackerel is a much maligned fish. But in Goa, its abundance and affordability meant it was part of many a meal. Cleaned, slit open on the sides, stuffed with a recheado masala, coated in rava and fried, it was a staple at my home.

So, when Sandeep Sreedharan, chef and co-founder of Mahé (a new modern coastal restaurant in Anjuna) promises me a recheado dish, I am excited. Except, the plate I’m served has nothing piscine on it. A white bowl holds two quartered aubergines, stems included, coated with the recheado masala, its oil mingling with a dollop of hung curd. It’s not a pretty dish, and eating it is messy too, but then regular Goan food wouldn’t win any prizes for its looks either.

Sreedharan’s Preserved Aubergine Recheado is delicious. And it is but one of the examples of a dish that uses Goan ingredients and recipes and turns them on their heads. Food in Goa is not just about fish-curry-rice anymore. Today, seek and you will find kismur (dried shrimp salad) pulsed and turned into a batter for steamed fish, a feni glazed risotto, a dried prawn and papad bhel, pork chops with honey and feni, and a crispy tambdi bhaji (red spinach) tempura. 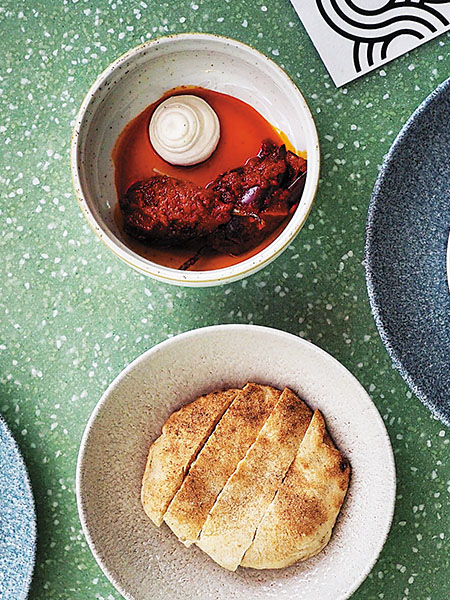 Call it modern or experimental cooking, but it is a new, much-awaited coming of Goan food. Chefs are attempting to strike a balance between staying true to traditional flavours while using a forward-thinking approach. It may not be large enough to be called a trend but is visible enough to get people talking about it.

“It’s about time,” says Fernando Monte da Silva, a Margao-based food and travel writer. “We don’t like reinventing the wheel when it comes to Goan food. But we have to present it in a new avatar and sell a new idea that still celebrates what the food is really about in order to put Goan food on the map.”

Da Silva runs a catering company, Our White Door, with his wife Griselda, through which they want to celebrate the diversity of Goan cuisine with forgotten recipes and experiments. Their biggest challenge is to get people to try their food for the first time; new clients are hesitant to take the plunge but once they do, they’re sold.

“Give people a talking point and it will appeal to them,” says da Silva, whose biggest experiments include a Dodol Samosa and Almonas Sliders (almonas are a fish/meat cutlet).

Nolan Mascarenhas, writer and F&B consultant, often advises restaurants on how they can be innovative yet offer something that is still Goan at its heart. “If you want to change the way Goan food is consumed, you have to take a leap of faith and try something radical. Consumption patterns are changing and people are seeking out alternative dining experiences,” he says.

A new avatar
These new experiments are not about distorting the flavour of the original dish but changing the experience on your palate.

Goan chef Gracian de Souza’s talking point is seamlessly blending Goan and Portuguese food, which did in the now-shuttered Porto & Poie, Mumbai. Last year, at a pop-up at Project Café in Assagao, de Souza served a five-course meal, playing on his Goan heritage and food memories, and his travels to Portugal to create a menu that celebrated both cuisines. “I didn’t want to do just a fish curry or a xacuti anymore but look at an elevated or innovative dining experience. A typical menu wouldn’t interest people as much,” he says. At his pop-ups in Goa, Mumbai and now Kochi, he has served mackerel escabeche with plantain fritter and recheado, salted veal tongue with triphal (or temphal) spice, and an Alentejo-style pork, clams, blood sausage and aamsol (kokum) stew.

“It’s tough to change the mindset of the locals and the older generation, especially when they’re set on a certain style of food and presentation. But the younger generation is getting influenced and they appreciate it when we show them where Goan food can reach,” says de Souza. For the older generation, like his parents (“I can’t cook modern Goan food for them”), he tries to focus on classic things, using typical spice mixtures like recheado or balchao.

One popular food item that lends itself beautifully to experiments is choris (Goan sausage)—spicy, tangy, fatty and heavy on the spice. It is typically had sandwiched in bread, added to rice, or just as a chilli fry with onions. At Saligao Stories in Saligao, chef Anisha Hassan serves chorizo-stuffed clams. The Goan outpost of Olive in Vagator has a Prawn and Goan Chorizo Pil Pil, and poi boys (essentially sandwiches) with a filling of Goan chorizo and mozzarella. At Black Street Bistro in Panjim, the star of the menu for over six years has been the Inspired Chorizo Pav—choris with caramelised onions, and dark chocolate shavings. In 2005, when Vasco Alvarez (aka Vasquito) joined his brother at Ernesto’s restaurant, one of the stars of his “globally inspired food with a Goan touch” was the choris pav lasagna—chopped up choris pav added to béchamel sauce and baked.

Over at House of Lloyd in Candolim, Lloyd Braganza and his wife Nerissa are experimenting with continental cuisine as a base to showcase local produce. The new menu has Kishmoor Bisque, the French classic infused with the spices and saltiness of kismur and brandy, and Spicy Choris Gnocchi, a home-smoked aged sausage encased in buttered dough dumplings.

At Our White Door, da Silva and Griselda innovate by taking familiar concepts and changing their presentation. One of their interesting offerings, usually met with much scepticism till the first bite, is the Dodol Samosa. The dodol gets a preserve-like consistency, is stuffed within phyllo pastry and deep fried. Both the dodol and the samosas are known ideas, which make people more willing to try out a combination of the two. “The more visible the change, the more it plays on the psyche. This is peasant food (barring the Luso Goan segment) and there’s not much you can do to pretty it up so that it looks good on your plate (and on social media). So, the change can happen in its form or presentation,” says da Silva.

Mascarenhas believes it is possible to have global fare with a Goan twist. Tired of eating “no-brainer starters” like batter fried fish or a chilli fry, he decided to create his own. His A Goan’s Tapas experience is a seven-course tapas menu paired with cocktails, both featuring local and seasonal ingredients and liquor. “Fundamentally, we are not changing the construct of the way the masala and dishes are made, but are changing it in terms of deliverables and how it is consumed,” he says. There’s prawn curry-rice and kismur turned into arancini and served with a whole prawn, a chorizo mussel paella, tambdi bhaji with feta and olives canapé, oxtail (stew) bruschetta, and bottle gourd stuffed with cafreal and cheese and baked (like a jacket potato). 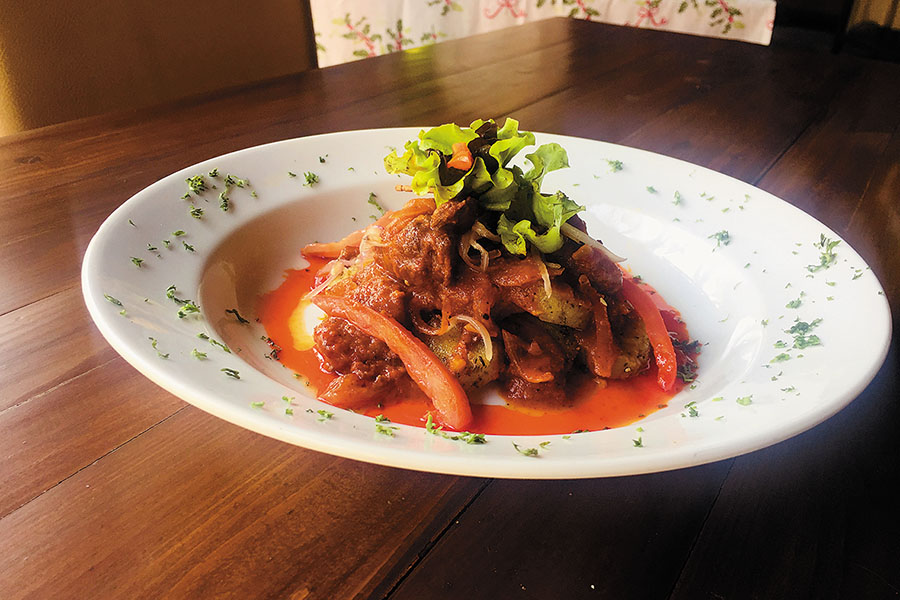 “Today, many Goan restaurants aren’t frequented by locals much because they are serving the same dishes—the cafreals, the sorpotels, vindaloos, and fried fish—in the same way. It has becomes monotonous,” says Alvares, who runs Vasquitos Kitchen (a catering company) and is managing chef at Elevar, in Ashvem. “By the side, some dishes are slowly disappearing from menus at restaurants and at homes; the fejoada being a prime example.”

Familiar, but not too much
The key to these new and innovative experiments with Goan food is balance. It’s not just about balancing flavours, but that fine line between being relatable but not too familiar. 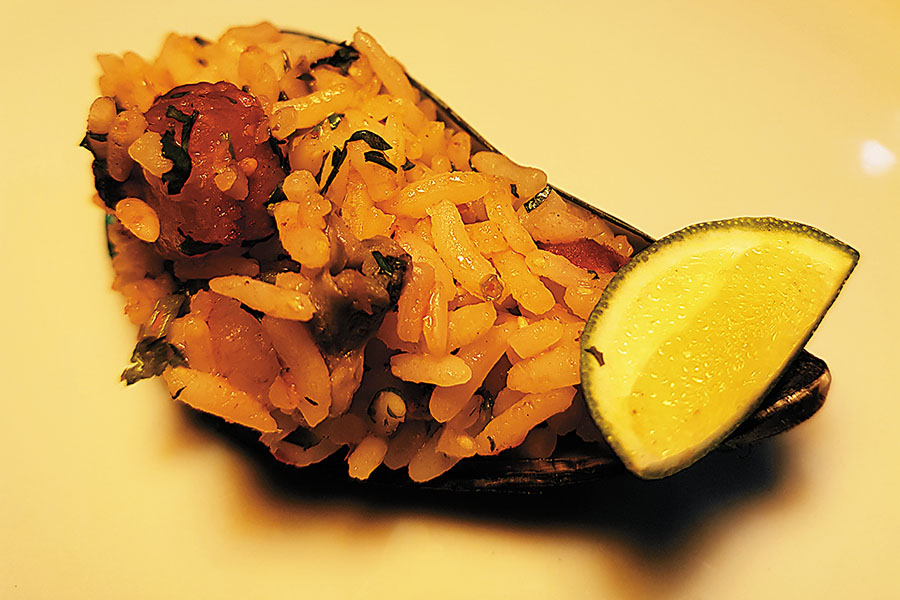 “Modernising a flavour is about keeping a balance. It is not about making things complex but working with authentic base flavours, elevating them with great produce and making it palatable to everyone,” says Sreedharan. He tweaked the recheado spice recipe to balance the flavours and ensure it would work well with aubergine. In the dish, the vegetable is flash-fried, preserved in the spice mix, and served with a hung yoghurt mousse that cuts through the heaviness of the spices.

Alvares knows a thing or two about experiments, having done them over a decade ago (“a bit too early”) at the now shut Ernesto’s in Panjim. He served a Goan version of escargot, using snails found during the monsoons and adding local chillies and coriander. His BBQ ribs are made with Kashmiri chillies and another version has a cafreal spice mix. Then there’s the Maka Pav Steak, a beef steak with a sauce made of red wine and sausages.

Today, Alvares has managed to introduce one new dish at Elevar, Recheado Prawns, served with sheera (set till hard and grilled), on a bed of kismur, topped with a whole prawn coated with recheado, and tamarind sauce. “Goans tend to be finicky. Call a dish Goan and they will compare it to their mother’s version or aunt’s version and it will always fall short. You have to call it something different or serve it in a new way and then they will try it,” he says.

At Prahlad Sukhtankar’s new restaurant, Black Market in Campal, there is popcorn in chorizo fat with sausage pate, pea chips and ghee foam. There’s also fish with smoked kidney beans ragout with all the flavours but not the meat of a choris. “We don’t classify ourselves as Goan food. Our identity is Goan but we are in search of new flavours,” he says. The menu is inspired by produce from their own farm, and tie-ups with locals and foragers. Thus there is a pumpkin flower stuffed with a kismur emulsion and tempura-fried, with temphal oil drizzled over it, and a slow-cooked goat leg with couscous and kohlrabi gravy that will “remind you of xacuti”.

Friends—well versed with Goan food and de Souza’s cooking—are invited to help him figure out the right balance between innovation and familiarity. “If the dish doesn’t sound or look Goan or Portuguese, it won’t work. I would not use just an ingredient and call it a Goan dish. You want familiarity with an element of surprise, but not too much,” he says. It is this philosophy that is driving his research, and which will govern the menu at the restaurant he plans to open in the state by next year.

Is Goa ready for a change of its cuisine, however small? “Someone has got to do it. There is already so much variety in cuisines here, I’m sure in time, people will be ready for modern Goan food. It needs to evolve or it may die out. I want to be part of that change: Make Goan food modern, approachable yet sophisticated enough to be on a par with any global cuisine,” de Souza says.

Tweets by @forbes_india
We need to bring emotion back into food: Heston Blumenthal
Jet's death spiral