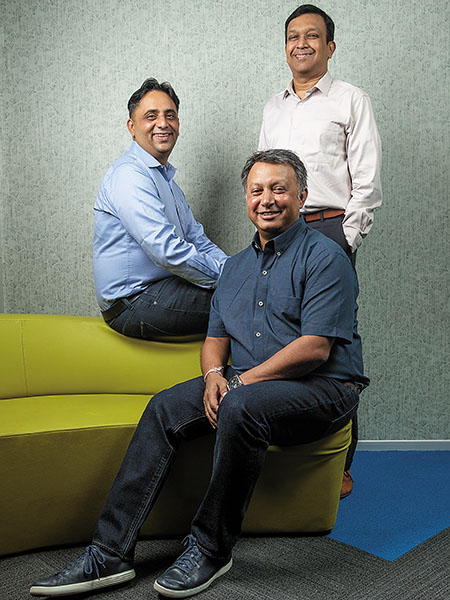 Close to two years ago, Walmart reorganised its technology teams to bring them closer to their business colleagues. They also created three positions for chief technology officers (CTO), each reporting to his head of business: The one working on US commerce was put in charge of all the tech platforms, a second CTO was working on international businesses and a third looked after the tech needs of Sam’s Club, a subscription-based membership service. Besides, a chief information officer (CIO) looks after the internal tech needs of the enterprise such as backoffice systems, HR, finance etc. A tech centre in far-off Bengaluru works for all of these sections, marking its presence in the entire tech landscape of the US retail giant.

“It’s a fairly well kept secret in some sense,” says Hari Vasudev, a Walmart vice president and country head for Walmart Labs India, as the centre is called. Internally, the centre is referred to as the India Development Centre. “Walmart as a company is generally very reticent, we don’t like to talk about the work we do and that’s true in India as well.”

Walmart Labs India builds software and solutions for some 5,000 stores in the US and a total of 11,000 worldwide. Work includes solutions for Sam’s Club in Mexico, for the Asda and George brands in the UK—including in online groceries—and the Best Buy stores, some of which are in India as well.

The Bengaluru centre is about 10 years old. Its overall workforce doubled to about 2,200 last year, and, this year, Vasudev expects to grow by another 50-60 percent. It started with data analytics for Walmart’s flagship retail business, and also worked on areas such as supply chain solutions for the stores. In 2011, Walmart acquired a Silicon Valley company Kosmix, which had built a social media tracking platform to figure out consumer behaviour. This helped seed a team in Bengaluru working on ecommerce as well.

Fast forward to around 2017, and “we realised that omnichannel is the way to go”, says Vasudev. About 90 percent of US households live within 10 miles of a Walmart store. Giving them what they want, when they want it and where they want it at the best possible price involves a lot of technology, and those solutions are increasingly being built out of Bengaluru.

At the core of this idea is ways to use technology for “smart forecasting”, one of the aspects the Bengaluru centre is working on. For instance, if customers at a particular zip code tend to order certain items a lot, can the nearest stores always have enough of those items stocked? Such research involves a lot of data analytics and the Bengaluru centre is one of the few locations within Walmart where all the teams, across the different CTO and CIO organisations, are involved, signifying its importance in the overall scheme of things.

The Bengaluru centre also includes an NOC, or a network operations centre, which for two-thirds of each day, starting at 7 am IST, monitors operations across each of Walmart’s stores as well as the traffic and transactions on the company’s ecommerce portal. “Everyone on the team is always ready to ask ‘what could go wrong’,” says Unni Aravindakshan, head of global technology and engineering operations at Walmart Labs India. Such troubleshooting could be for a small piece of new code or something more catastrophic as the website going down on a Friday evening.

The centre also works on “data platforms” where it crunches massive volumes of data that Walmart has been collecting at its stores on consumers and their buying behaviour over a long period, predating the cloud computing era. The pile of data keeps rising every day with the rise of ecommerce. The challenge now is to create a scalable cloud infrastructure that will hold all this data on which the company can eventually run its analytics.

Fine-grained personalisation at the individual level is also possible at Walmart, says Vasudev. The company’s website is the third-largest in the US by visits, and online and offline combined, Walmart serves about 260 million customers every week. “The teams here are building data platforms to support that kind of personalisation and several other things that we want to do with data,” adds Vasudev.

Besides in-house data, Walmart is working with Microsoft and Google to tap public cloud options. For example, Walmart’s suppliers can view what is selling and what isn’t and they can take decisions based on that.

Another big initiative this year is that Walmart is ramping up its marketplace significantly. The company wants to expand its third-party seller ecosystem in the US. And the global leader for the marketplace operations across all geographies at Walmart sits at the Bengaluru centre.

Walmart Labs India is also building the next-generation architecture for pharmacies, one of its thriving businesses, where the IT systems were hitherto all individual store-centric: The systems required to process the prescriptions and run pharmacies were all installed in each individual store. That meant replication of the infrastructure in every store with the attendant costs of space, hardware and utilisation as well, with one store seeing too much traffic and another, merely 10-15 miles away, hardly any at all. At the Bengaluru centre, the company is writing systems for pharmacy chain management on the cloud, where prescriptions can be processed through licensed pharmacists serving multiple stores from a remote central location and tracked online. “In fact this is a team that we built from scratch just about a year ago and we are now starting to deploy the system across 25 different stores and will scale it up to thousands over the next year,” Vasudev says.

With work such as this, AI and machine learning can’t be far behind and Walmart India has an internal team with an AI project code-named Elements working on those aspects. Most teams working from the centre are embedded with data scientists, who can plug their models into cloud-based software applications without having to worry about computer or storage needs.

Walmart India is open to acquisitions to bolster its data scientists’ team and one recent purchase was of Dataturks, which had built the underlying computer systems to allow data scientists to focus on building and testing models. 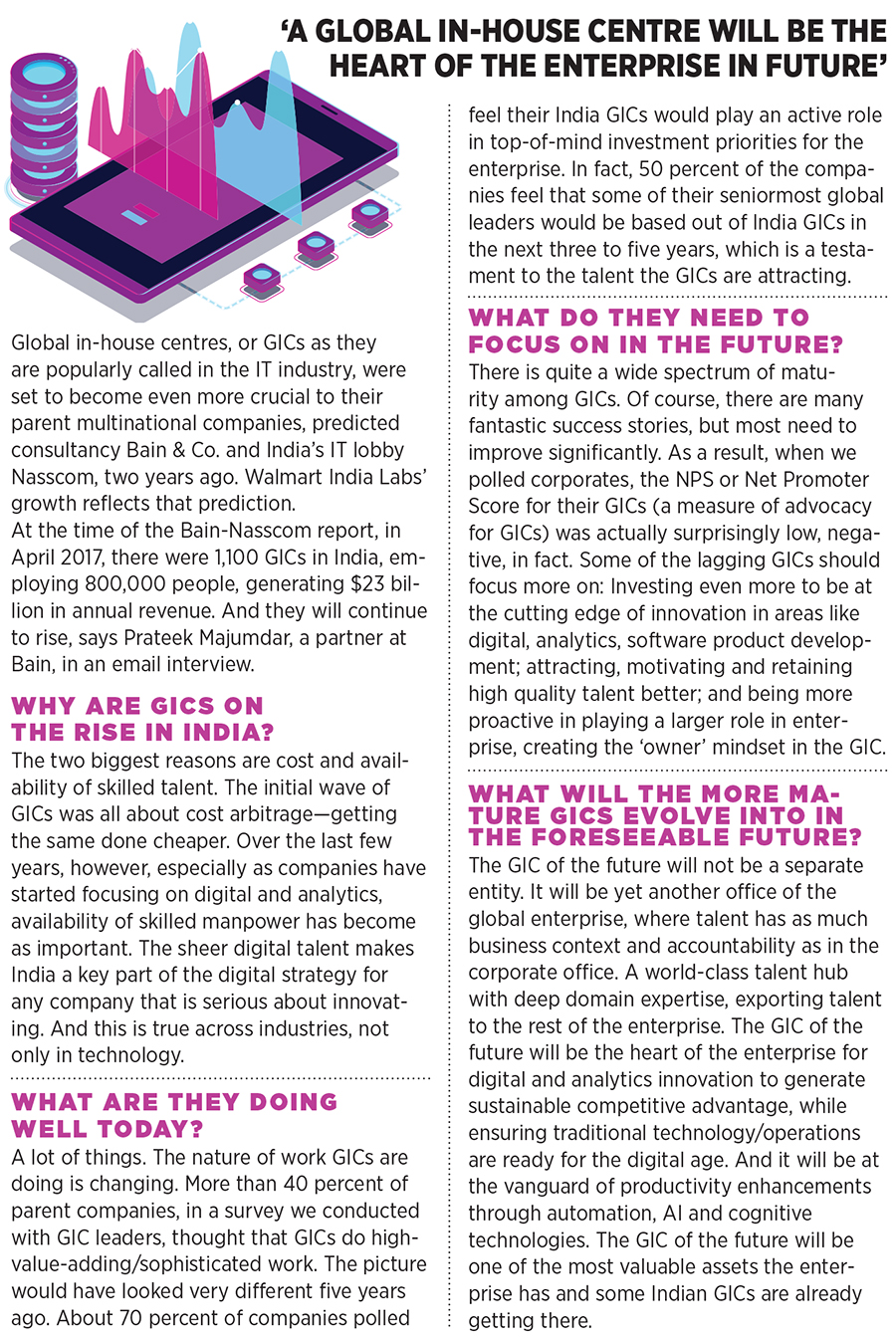 “We have a sizeable team of data scientists,” says Mrinal Chatterjee, head of merchant technologies. “These data scientists are helping our merchandisers figure out our assortment planning, price and space planning, doing a lot of what-if analyses. For instance, what if we change a certain assortment in a given set of stores and what impact will that have on the customers on the sales in the stores and so on.”

Walmart India Labs is using the Elements platform to build something deeper called retail graph, where machine learning and AI come together to establish relationships between products beyond external attributes like sizes.

For instance, traditionally all chairs would be categorised as chairs. With machine learning and AI, one can ascribe style elements to the chairs, like its material combinations, colours, design etc, helping salesmen make recommendations to buyers.

Internally, Walmart is going through a massive digital transformation. The entire leadership is committed to the idea of building a product-led technology mindset in the company, Vasudev says.

The idea is to “datafy everything”, he says, citing Walmart CEO Doug McMillon, to “apply insight and intelligence to everything from interaction with customers at the front end all the way back to how suppliers interact with backend systems”, he says.

Over the next year or two, there are specific areas the Bengaluru centre will focus on. One is what Vasudev calls sustainable scale. The idea is that they must grow, but in the right way. They will focus on building strong technology teams without lowering the bar on talent and work on the right models of collaboration with other parts of Walmart. “We want to contribute to create empathy for our customers among our associates even though we may be far away from them,” he says, adding, “We want the next breakout idea for the company, whether it is in AR/VR or assisted shopping, we want that to come out of this centre.”

Tweets by @forbesindia
Naresh Goyal's journey into turbulence: A timeline
We need to bring emotion back into food: Heston Blumenthal