Now, the figures driving #MeToo say they are feeling a surge in momentum, but are grappling with how they can move beyond individual allegations and toward a concrete set of policy and legal goals 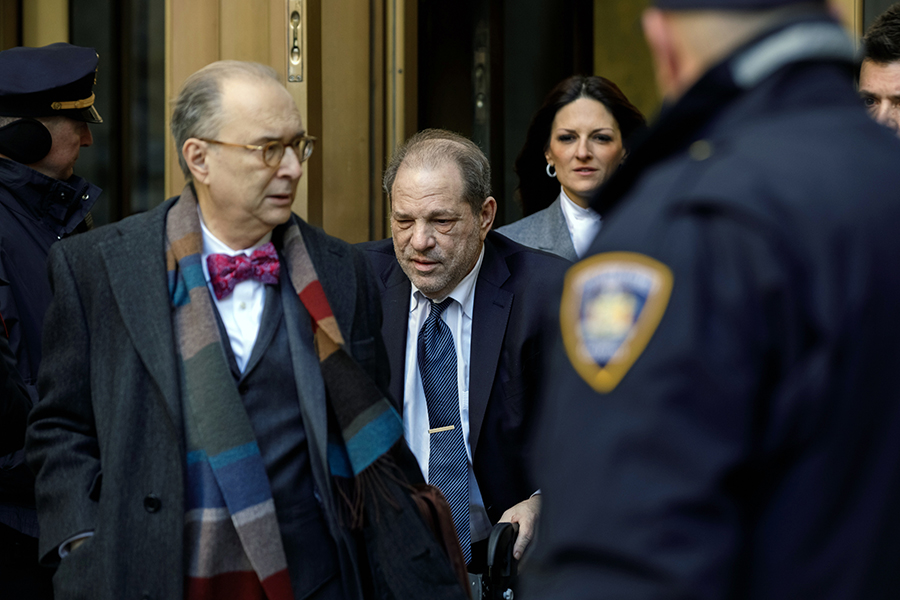 Harvey Weinstein leaves State Supreme Court in Manhattan after the fifth day of jury deliberations in his trial on Friday, Feb. 21, 2020. After Weinstein's conviction, the figures driving #MeToo say they are feeling a surge in momentum, but are grappling with how they can move beyond individual allegations and toward a concrete set of policy and legal goals. Image: Anna Watts/The New York Times

Three days before Harvey Weinstein was convicted of rape, Michael Bloomberg agreed to release three women from nondisclosure agreements so they could publicly describe complaints against him. Hours after the Weinstein jury adjourned, celebrities and fans packed a memorial for Kobe Bryant as questions lingered about the impact a 2003 rape case would have on his legacy. The next day, a $500,000 deal to settle sexual harassment allegations against the opera superstar Plácido Domingo collapsed when details of an investigation into his behavior toward over two dozen women became public.
Those developments are all signs of how potent — and unresolved — #MeToo continues to be. This week, the man who ignited the movement was found guilty in New York, a victory many victims once considered unattainable. Now, the figures driving #MeToo say they are feeling a surge in momentum, but are grappling with how they can move beyond individual allegations and toward a concrete set of policy and legal goals. “The outcome of the Weinstein case should be seen as fuel to keep survivors and our allies motivated for change,” said Tarana Burke, the founder of the movement. “Moving close to the third year since the viral #MeToo moment, we have to be thinking about how we make big strategic moves that are beyond individual takedowns.” Melinda Gates, the philanthropist, recently pledged $1 billion toward promoting gender equality, an enormous infusion. She wrote that her decision was spurred in part by #MeToo, and that she wanted to tackle issues like workplace harassment. “A window has been opened,” she said. But after more than two years of improvisation, there is growing consensus on the need for a more united front. Many of #MeToo’s leaders — including Burke, Time’s Up and the National Women’s Law Center, all backed by Gates — are considering how to form “a cohesive, common agenda,” said Fatima Goss Graves, the president of the center. They all say they want to act before the moment passes. The path ahead has been unclear in part because the movement is diffuse, a grassroots chorus. Unlike, say, the fight for same-sex marriage, it does not have one landmark goal. Basic questions about fairness, the scope of scrutiny and accountability remain unsettled. At the same time, those trying to push #MeToo forward are brimming with priorities: Sex education in schools that emphasizes consent. Longer statutes of limitations and filing deadlines for lawsuits. A more expansive legal definition of sexual harassment, stronger federal laws to protect more workers, and other changes. The goal of Time’s Up, the organization started in Hollywood in the wake of the Weinstein accusations, is no less than “safe, dignified and respectful work for everyone,” said its president, Tina Tchen. She cited targets like equal pay and paid leave. One issue the movement continues to focus on, nondisclosure agreements, offers a look at what has and has not changed since the #MeToo era began. The restrictions — often imposed as part of settlements for sexual misconduct allegations — were rarely questioned three years ago. But then reporting on Harvey Weinstein and others showed how the agreements often silenced victims and enabled abusers. Since 2017, at least twelve states have passed laws restricting their use, according to the National Conference of State Legislatures. New Jersey has gone the furthest, making them unenforceable if victims break them. Google, Microsoft, Uber and Condé Nast have also sworn them off as a tool to conceal abuse. A small but growing contingent of women have broken their NDAs or worked to be released from them, paving the way for change. McKayla Maroney sued USA Gymnastics to be released from one she had signed involving Larry Nassar. She was later told by the organization that she would not be penalized. Several women who have accused the singer R. Kelly of sexual abuse have spoken out despite confidentiality agreements. At least four Weinstein accusers have done the same. So far, none appears to have faced legal consequences. Yet many still can’t speak — Bryant’s accuser signed a settlement deal in 2005. For the majority of women, especially those whose cases don’t wind up in the news, breaching an NDA can carry extraordinary risk, including the potential for significant financial penalties. And most of the state-level changes have been modest. A new law in California restricts confidentiality agreements once a lawsuit or formal complaint has been filed, but many settlements are signed earlier in the process. “Women are being silenced every day,” said Nancy Erika Smith, a lawyer who represented Gretchen Carlson in her sexual harassment lawsuit against Roger Ailes, the founding chairman of Fox News. “It is a hammer designed to shut women up.” Bloomberg’s move to rescind the confidentiality agreements was a high-profile victory for #MeToo, but the circumstances were unique. Sen. Elizabeth Warren, his competitor for the Democratic nomination, had used a presidential debate stage to pummel him on the issue. Beyond that instance, it is not clear what or who will force further change on NDAs, or more broadly, the wide array of other #MeToo-related issues. Even though the movement has been fueled in part by sexual abuse allegations against President Donald Trump, his challengers on the left have not discussed ending sexual abuse the way they discuss reforming health care or halting climate change. Beyond Warren’s moment, there has been almost no talk about a broad, transformative #MeToo agenda at the Democratic debates. Goss Graves said that she and other activists were working on a common path forward. If Weinstein had not been held accountable, “I think there would have been a real loss of hope,” she said. “And now there’s an opportunity.” But that won’t last without investment and deep examination of the causes of the problem, Gates said in an email. “The window of opportunity is open,” she said, “but there is no guarantee it’s going to stay open.”

Tweets by @forbesindia
Comic: The deadliest killer of all...
Nominees for the CNBC-TV18 Indian Business Leader Awards 2020 announced