You can't have a 21st century India with 19th century institutions: Amitabh Kant

Niti Aayog CEO Amitabh Kant believes the government has carried out several institutional and economic reforms, the benefit of which will be seen over the next few years 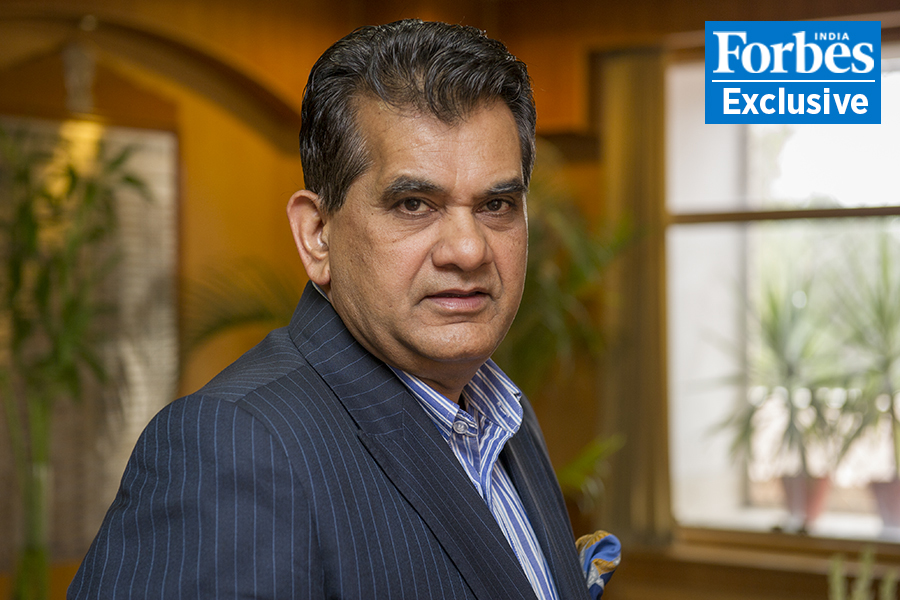 What do you think are some of the significant achievements of the government in the last three years?

Firstly, the attempt at [implementing] the Goods and Services Tax, a Bankruptcy Law and a National Company Law Tribunal, [and the] scrapping of almost 1,200 laws are major steps forward. Reducing the number of forms for import and export, the fact that we can register a company in a day, and the competitive ranking of states on the ease of doing business are some of the pathbreaking work that the government has done.

Secondly, there has been an attempt to attract the best global companies to India. We have seen our FDI grow at about 61 percent in the last three years at a time when FDI across the globe has fallen by 16 percent. We have had some outstanding companies come to India and that, over a period of time, should make a huge amount of difference.

Third, there has been a whole shift from input and output to outcome monitoring. And we, at Niti Aayog, do an outcome-based presentation to the prime minister across sectors such as infrastructure, health care and education. Outcome targets have been spelt out and there has been an outcome budget that was tabled in Parliament along with the main budget. We believe the focus on outcomes will yield a lot of results over a period of time.

Fourthly, there is a huge thrust to make India more innovative and dynamic by creating the right ecosystem for startups, and with the right action plan that is benchmarked against the best in the world. We have an Atal Tinkering Lab that is supporting tinkering labs in schools and supporting incubators.

Then, the focus on creating good infrastructure on ground is giving a push to the country. We have seen growth in the number of roads being constructed. We have also seen a big rise in railway projects being executed. We have laid emphasis on improving the health of discoms [electricity distribution companies], which is critical for India.

These are some major measures to make a radical transformation in the functioning of the economy. Yet, there are several challenges in the context of the global slowdown… we will face them as we go along.

Have we been able to realise and retain the full benefits of demonetisation?

Well, it can’t be that India’s ambition is to become a $10 trillion-economy over the next 15 years when half of its economy is black. It’s important that we integrate the parallel economy into the formal one. This, in the long run, will lead to higher tax revenues, and higher inflow of resources towards health, education and nutrition. It will also make available long-term funds for infrastructure.

To my mind, one of the important spin-offs of demonetisation was the PM’s ability to push for digital payments, which, in the long run, is critical for formalising India’s economy; that should lead to lower cost of transactions while enabling data mining.

These are all long-term gains that would benefit the economy. We are the only country in the world with 1 billion biometrics, and almost 1 billion mobile phone [connections]; besides, we are pushing for the opening of bank accounts and ensuring that they get linked to Aadhaar [numbers] and to mobile numbers so that one can do a mobile-to-mobile transfer, bank-to-bank transfer, and Aadhaar-to-Aadhaar transfer [of money]. The cost of physical transactions is much higher than that of mobile transactions. India definitely has the potential to convert a mobile [phone] into a bank, a mobile into a wallet. We want to ensure that, in the long run, all Indians do their transactions through mobile [phones].

Private investment stubbornly refuses to revive, despite government attempts to boost it with a large dose of public investment. Why?

There is a global slowdown. The Indian private sector had expanded and many of them had taken loans from banks, which then turned sour. Bank restructuring is being done and that will bring greater discipline in the private sector, and help good corporates move on.

While we have seen a lot of FDI in the past, it is important for us to drive private sector investments too. It can become easier through certain public sector projects that have been de-risked, where tolls are already flowing in. The attempt is on to facilitate private sector participation in government projects that are fully de-risked.

“ It is better for the government to spend on health, education rather than on an airline.

Jobless growth is proving to be a challenge. What more needs to be done on this front to reverse it?

Many journalists are talking about jobless growth on the basis of Labour Bureau statistics. They are based on surveys that were initiated in 2008 and 2009, during the global slowdown, to capture the unemployment figure. It captures data based on only 3 percent of the total enterprise, and that keeps getting quoted. This analysis is totally flawed.

Also, if you were to look at the Pradhan Mantri Indira Awas Yojana, the total amount of housing funded in three years is significant. So there are figures of self-employment through these schemes that are not getting considered or calculated. These are the best forms of jobs today. A committee that is headed by the vice chairman of Niti Aayog [Arvind Panagariya] is looking to capture employment statistics on an annual basis, and the best way to do that is through a household survey.

Niti Aayog, media reports suggest, is pushing for an outright sale of Air India. Is that a feasible option considering its debt and accumulated losses?

Our view, based on its balance sheet and its total debt, is that it is better for the government to spend money on health, education and nutrition rather than on an airline that captures only 14 percent of market share. Airlines in the private sector have done well and there is no rationale for the government to continue in that sector; it is based on the fact that Air France, British Airways, Lufthansa, all have moved from being government holdings to the private sector. That’s a recommendation of Niti Aayog, but the final call has to be taken by the Cabinet.

Farm loan waivers announced by states are hurting their fiscal position badly. Is it an effective way to tackle the agrarian crisis?

The Government of India’s stand so far has been that it’s a state issue. States like Uttar Pradesh, for instance, have taken a call post-election. The central government’s stress has always been to ensure the financial discipline of the states. And states, in turn, have their compulsion to look after the interests of their farmers. So they have to take a final call and find the right balance between financial discipline and meeting the interests of farmers. This is not a central government issue.

Which are the areas that need to be focussed on in the next two years? Also, it’s been over two years since the Make in India campaign started. How has the journey been so far?

First and foremost, we think institutional reforms are critical. You can’t have a 21st century India with 19th century institutions. We have focussed on reforms of institutions such as the Medical Council of India, the University Grants Commission and the All India Council for Technical Education. In fact, all these are areas where Niti Aayog has made specific recommendations.

Also, what is significant is that we at Niti Aayog have moved away from the erstwhile five-year plans to a 15-year vision document, a three-year action plan and a seven-year strategy. Our three-year action plan is already in the public domain, and we have made major recommendations across sectors to make India a far more efficient economy. Our view is that productivity levels must rise in India. And for that, the government must become a facilitator and a catalyst. Under Make in India, a lot of work has been done to make manufacturing in India easy and simple. Going forward, urbanisation will have to be a major driver of growth. We have been able to attract significant amount of FDI, we have also been able to bring in new companies in sectors like automobiles and auto components.

Also, with the opening up of the defence sector [to FDI], we expect to see significant investments coming in, which will give a further push to manufacturing.