With Lybrate, a doctor is just a click away

With online consultation platform Lybrate, co-founders Saurabh Arora and Rahul Narang are trying to address the abysmal doctor-patient ratio in the country 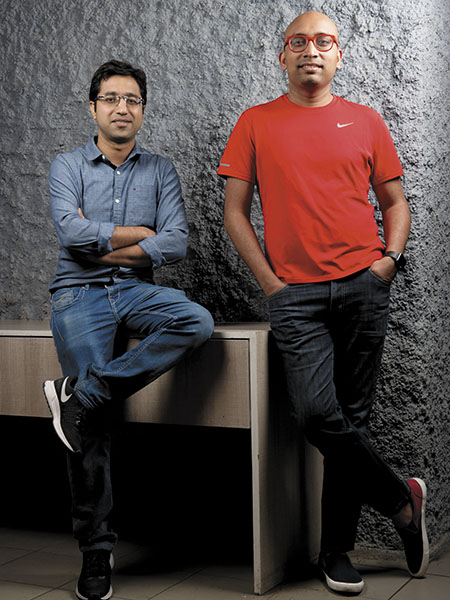 
For Saurabh Arora, 37, giving up a Silicon Valley dream career to chase an entrepreneurial pursuit back home wasn’t a gamble. “It was a well thought-out plan,” says Arora, as he settles down for a chat with Forbes India in his plush office on the Delhi-Faridabad border overlooking the multi-lane flyover that connects the two cities. “Entrepreneurship is not about passion alone. There has to be a method to the madness.”

In 2014, Arora, an alumnus of IIT Delhi and Columbia Business School, put in his papers as a data scientist at social networking site Facebook at Menlo Park in California after a three-and-a-half-year stint to start Lybrate, an online doctor consultation platform, in India, in 2015.

“When I was working for Facebook, my job was to connect advertisers with people using Facebook as a platform,” says Arora, CEO and founder at Lybrate. “I thought why not apply the same logic in health care and connect doctors and patients on a single platform.”

The seeds of starting an entrepreneurial venture were sown during one of his visits to India from the US. “When I was in India for a vacation, I happened to visit a chemist. I was shocked to find that half the people did not even know what medicines to buy. Some had a prescription while others didn’t,” he recalls. “I tried to figure out the root cause of this problem and realised there was a huge opportunity waiting to be tapped.” The problem of self-medication in rural India is because of a paucity of doctors. In metros, it’s about lack of convenience. “I decided to give up my job and use technology to solve this problem.”

Arora was not alone in his journey. He was joined by his one-time colleague at a media company and now a friend, Rahul Narang, 30, who is co-founder and chief technology officer at the health tech startup. An engineer from the YMCA University of Science and Technology in Faridabad, he was earlier a lead software engineer at Snapdeal.

Together, they launched Lybrate to allow people to communicate with doctors from anywhere, at any time and discuss any health issue through text, video and voice chat.

Lybrate works on the concept of an online out-patient-department (OPD), through which technology is used to improve accessibility to quality health care in the country. “We wanted to connect a patient sitting in Moradabad to a doctor in Mumbai,” says Arora. “Lybrate was launched to address the doctor-to-patient ratio in the country’s health care sector.”

In less than three years, Lybrate claims to have over 1 lakh doctors registered on its platform across the country and, on a monthly basis, there are over 6 million interactions by way of searches for doctors, health queries, patient-doctor communication, and appointments for doctor and lab tests booked on the site. It is among the go-to portals for health information for patients, and for health care providers. As much as 60 percent of the traction on the site currently comes from tier 1 cities, while the rest is from tier 2 and 3 cities. It also has the largest library of health queries and medical advice on its platform in India.

While launching a startup wasn’t a cakewalk, it wasn’t tough either, says Arora. “Since we had both worked for ecommerce ventures earlier, getting the nuances of the business right was not too difficult. We did not have to unlearn anything in particular. It was more an extension of what we were doing,” he says.

Lybrate, started in 2015, has over 1 lakh doctors registered on its platform

The initial months were all about getting the funding in place and getting doctors to register on the platform. “Initially, what worked best for us was word of mouth praise wherein users experienced our services and passed on a ‘good’ recommendation about those to others,” says Arora. “It took us a bit of time to create awareness among doctors and get them on board. But we made sure we built a product that had a workflow which made doctors talk about Lybrate and recommend it to others. That helped us get a lot of traction,” says Arora.

Doctors can sign up for free to be on the Lybrate platform. “It allows them to share their wealth of knowledge with thousands of users, even with those who are far off from their geographical area of practice,” says Arora.

Initial capital for the venture came in from Gokul Rajaram—who played a key role in developing Google’s AdSense network during his time there—with whom Arora had worked briefly at Facebook.

Rajaram, whose startup was acquired by Facebook in 2010, joined the social networking company and became the director of ads there. He eventually left Facebook to join US-based financial technology firm Square Inc in 2013. “I’ve been fortunate to work with Gokul. When I quit, I went to him for funding. He was, in fact, the first person who came to my mind when I wanted to start the venture,” says Arora.

While Rajaram only gave him a part of the initial corpus required, it helped the founders rope in other investors. Lybrate raised a seed round to the tune of $1.23 million from Nexus Venture Partners, Rajaram and independent investor Vispi Daver in August 2014.

A year later, in July 2015, it got a commitment for another $10.2 million from Tiger Global, Nexus Venture Partners and Ratan Tata, chairman emeritus of Tata Sons. The startup got about $3 million of the $10.2 million in April this year.

Given the low penetration of health care services in the country, a plethora of health tech startups are trying to fix different problems. Some are focussed on doctor discovery, a few on medicine delivery, others on at-home health care services, and some on a combination of these. Lybrate’s focus has been on the huge doctor crunch. According to a report jointly published by KPMG and Ficci in 2016, the doctor-patient ratio in India stands at a dismal 1:1,700.

A further breakdown of numbers paints an even grimmer picture. According to health care venture capital fund Quadria Capital, over 70 percent of India’s population lives in the hinterland. Moreover, 60 percent of hospitals, 75 percent of dispensaries and 80 percent of doctors are located in urban areas. The situation is aggravated by unavailability of secondary or tertiary care services in rural areas (only 37 percent of people have access to inpatient care).

“A situation like this lends itself to a great opportunity for health tech startups to come forward with solutions pertaining to everything from simple service delivery to offering path-breaking innovations,” says Sunil Thakur, director and chief operating officer at Quadria Capital.

“Lybrate’s workflow starts from patients asking health-related questions anonymously and then moves towards online or offline consults as they get more comfortable with the doctors on the platform,” adds Sandeep Singhal, co-founder and MD at Nexus Venture Partners. “Lybrate’s model of patient engagement puts the patient at the centre and allows them to access all the health care services they need.”

It is what sets Lybrate apart from its biggest competitor in the market today—doctor discovery platform Practo (started in 2008) that works both in the B2B and B2C segments. The difference between the two, Singhal says, is that Lybrate was designed as a patient-engagement platform from the beginning whereas Practo was designed for patients seeking appointments. He adds, “Lybrate is changing the patient-doctor interaction and bringing it online, either on the website or through the app. This requires a behavioural change that will take time to get widely adopted.”

Currently, Lybrate is riding on a turnover of over ₹22.45 crore (FY15-16) and is looking to clock ₹25 crore in the current fiscal. While a major part of its platform is free for users and doctors to use (interaction with doctors is free unless you want to interact with a doctor of your choice), there are multiple revenue streams. ‘Lybrate Consult’ enables users to consult doctors of their choice by paying a consultation fee online. Then there is ‘Lybrate Lab+’ and ‘Lybrate Cube’, which make up a part of the company’s revenue. The former enables patients to initiate lab tests, while the latter provides doctors with tools to multiply their presence, help manage follow-up of patients online and focus on patients who need their physical presence as well.

However, challenges remain. Many health care startups have entered the market in the past few years, but very few have been able to establish successful models so far. “The space is likely to witness a significant churn in the next few years with only those players emerging as leaders who are able to provide a substantial value proposition to patients as well as doctors,” says Monika Sood, co-founder and partner at boutique advisory firm Arete Advisors.

Arora and Narang have, perhaps, got the advantage of a head start. However, as Arora says, “It’s definitely not a cakewalk... ultimately it’s work. Whether you work for yourself or someone else, that shouldn’t matter. You should just focus on the quality.”

Tweets by @forbesindia
We don't see ourselves as just a cards company: Mastercard's Ari Sarker
India is probably the biggest market for us: WeWork's Miguel McKelvey