India is probably the biggest market for us: WeWork's Miguel McKelvey

Miguel McKelvey, co-founder of collaborative workspace firm WeWork, talks about the potential in the country, how the company came into being and how his friends make fun of his billionaire status 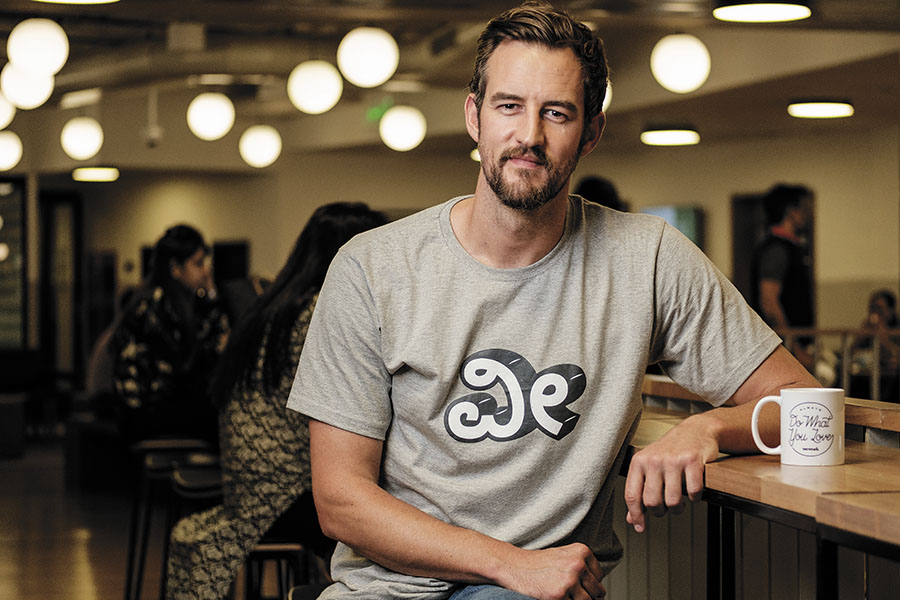 WeWork, in partnership with the Embassy Group, has close to 350,000 square feet of shared workspaces in India
Image: Nishant Ratnakar for Forbes India

In Bengaluru recently, Miguel McKelvey (43), co-founder and chief creative officer of the famed New York-based collaborative workspace startup WeWork, valued at $20 billion (around ₹1.3 lakh crore), came up with the recipe for a spectacular Indian fusion dish—good enough, according to him, to even start a restaurant. “I put coconut chutney, not on… I forget the little white thing… dosa… no idli [when prompted], but on scrambled eggs. Everyone thought it was so weird, but I thought it was a great combination; it was so good,” said McKelvey as he settled down for a chat with Forbes India.

But then, breaking with tradition has been exactly what WeWork stands for. In 2010, McKelvey, along with his friend Adam Neumann, founded the company that has since changed the way people and companies transact with their workspace landlords. WeWork redefined the very concept of a workspace by ushering in a shared community culture with a diverse set of people under one roof. Its over 150,000 plus member base is a mix of creators, freelancers, entrepreneurs, small and medium enterprises, and large enterprises all of whom get access to discounted health care services, payment processing for their companies, IT support, education and training, to name a few.

In India, WeWork has entered into a partnership with real estate tycoon and billionaire Jitendra Virwani’s Embassy Group. They launched operations early this year and have close to 350,000 square feet of shared workspaces in Bengaluru and Mumbai. Virwani’s son Karan and real estate industry veteran Juggy Marwaha are spearheading the operations of WeWork (India). “India’s probably the biggest market for us,” says McKelvey. Excerpts from the interview.

Q. How did the idea of WeWork come about?
Adam and I met in New York— his roommate was one of my co-workers. When we met, in 2005-06, for whatever reason we just hit it off. We had a connection despite the fact that we are very different people—he’s a brash Israeli and I’m from the West Coast of USA, which is very calm and has a low-key kind of vibe. Both of us were in the city to pursue something big, but neither of us had a clear idea of what that meant. We are both very ambitious.

The key moment in our friendship [came] when Adam was looking for a new workspace for his baby clothing company. He was looking for space in Manhattan but I suggested Brooklyn, where my office was. He asked me whether I would design it as I was an architectural designer. He ended up taking space just down the hall in my building and we ended up hanging out a lot, talking and thinking about stuff. We were surrounded by a whole bunch of different kinds of small companies, from tech startups to musicians, hatmakers, filmmakers, and architects. We felt there was a really cool energy amongst these people. But in the building we were in, there was nothing connecting them and nothing supporting them. The service in the building was really bad—the internet was unreliable and the air conditioning terrible. All these things are a distraction when you are trying to operate a small business. So we started thinking if there was a way we could help solve a lot of those problems that a small business faces and make it super easy for them to just walk in with their computer and start working.

In 2008, we started Green Desk. It was an interesting time—the financial crisis saw a lot of companies downsize and you had a lot of people in the market looking to start a new phase in their careers. The simple premise of Green Desk was that people who were environmentally responsible —who would think about recycling, caring about where their power came from—would be happier in a shared environment. While that premise was true to some extent, many people came to us not caring about it at all. But we quickly saw how people became friends and relied upon each other—they would be working late at night and talking about their business ideas and hanging out together socially. We realised that was the real strength—building community amongst the people. The logistical support is great, but it’s really the social and emotional support—the feeling that you’re a small business and not alone, and that you’re not isolated. But, when we were thinking about it as a huge global opportunity, we didn’t think Green Desk was the right framework. That’s when we reinvented and started WeWork in 2010 because we felt it was a much bigger idea. But Green Desk still exists and is doing very well. We [Adam and I] sold our part [in the company] to our partners.

Q. How does your business model work?
The business model is pretty simple. We buy space, typically on a long-term lease, and then we create a variety of different spaces within the buildings that we take. Everything from a single desk that’s available to different people at different times to large office spaces for companies that sometimes need to seat up to a 1,000 people. And they are all paying a membership fee for the space they use and it’s highly flexible depending on what a person or company needs —from a month, to a year to a couple of years. This simple flexible model is something that doesn’t typically exist in real estate. It was one of the major innovations, even though it doesn’t seem like that big a deal.

I don’t know of any large real estate company that serves one person or two people who need a room that’s six feet by ten feet on a short-term basis. I don’t think that’s something they typically do. We are in the business of building and supporting a community. We are not just giving you space and leaving, which is what a typical landlord does. We are also constantly engaging with our members. We do thousands of events around the world, which are tailored to support the communities in our buildings. So it goes far beyond the typical relationship that a landlord would have.

Q. You also manage office spaces for the likes of IBM in Greenwich Village, AirBnB in Berlin, and Amazon’s Boston office. Was this part of your initial game plan or did it just evolve?
I’m not sure what I’m exactly allowed to say and not say about those specifically. But I will say, yes, we have, with multiple member companies, developed solutions that are for large teams.

We have had some innovative leaders of large companies say, ‘My team is much more productive, happier, and more excited about coming to work at a WeWork office rather than our traditional headquarters.’ So that’s definitely an evolving part.

From day one, we have had a community that’s quite diverse. In our first building, we had independent graphic designers, consultants, musicians, filmmakers, lawyers, and architects. There was a time when there was no duplication: You could look at the whole list of members and there was literally not two of anybody.

Q. What opportunities does India offer?
When we first came here, or thought about coming here, it certainly felt a bit overwhelming because it’s such a huge place and the culture is so diverse, varying from city to city and state to state. So having a partner is essential in understanding the local culture and also gives us credibility in the market. There were multiple people whom we were talking to, they [Embassy Group] just happened to be the one for us that made the most sense, because of their alignment philosophically. Both Jitu [Jitendra Virwani] and [his son] Karan, once they saw WeWork, felt like it was something that could be meaningful for the growth and evolution of the Indian economy and the young people here. If they [Jitu and Karan] just wanted to be normal landlords, they could have just leased space to us. But they wanted to engage with us.

India’s probably the biggest market for us. While we are super excited to be in Japan, Australia and Europe, we are talking about hundreds of millions of people here in India. I think this is a place that, in the upcoming years, will play a major part in the way the world economy develops. For us to be here now is an incredible opportunity.

Q. You have raised $8 billion in funding—over $4 billion alone this year—and are the most valued startup in New York. Did you ever dream of this kind of success?
I was definitely overwhelmed when we were valued at over $100 million, and when we were valued at over $1 billion that was shocking. As an entrepreneur, I don’t think you think about valuation or raising money as part of your plan in the beginning, right? You think about solving a problem.

The money is cool, but it’s not the thing that we are really excited about. From the beginning, we never wanted articles written about how much money we raised.

While a lot of companies send out press releases when they raise money, we don’t want to be known for how much money we raised.

Unfortunately, the media likes to write about these dollar amounts and those are the things that come up in headlines.

The first time my friends saw my billionaire status [in Forbes], they made fun of me because I was very low on the list. I was like only number 1,326 or whatever it was in the world. [As of September 24, McKelvey’s personal net worth, according to Forbes, is $1.73 billion placing him at number 1,234 on The World’s Billionaires list.]

I have never been interested in doing this for money and I still don’t really care that much [about the money].

That said, we know that money is energy and when used in the right way, that energy can have a positive effect. I think our heads are in the right place. There are people who have acquired tremendous wealth and are doing tremendous things with it—from Bill Gates to Warren Buffett. If there is any ambition, it’s to follow in those footsteps and see how we can use wealth to have a positive impact.

Tweets by @forbes_india
With Lybrate, a doctor is just a click away
TCS expects 'steadier, stronger' growth ahead after beating September quarter expectations