Zomato CEO Deepinder Goyal announced this morning that his company has acquired Uber Eats in India. The latter has shut its India operations with immediate effect, leaving many stakeholders in the lurch 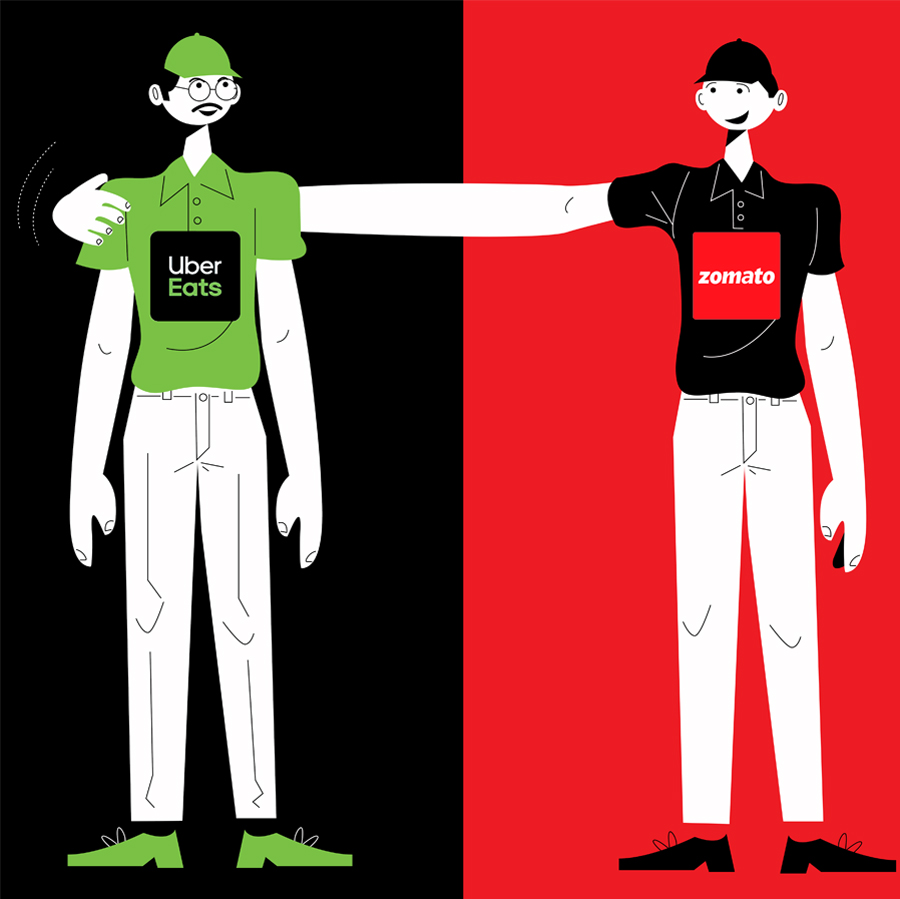 At about 7.30 am on Tuesday, Zomato’s founder and chief executive, Deepinder Goyal, sprung a surprise. After months of rumours, Goyal confirmed that ‘Uber Eats India is now Zomato’. His food tech firm has acquired the global giant’s India food delivery operations in an all-stock transaction worth nearly Rs 2,500 crore.

The deal gives Uber 9.99% ownership in Zomato. Uber entered food delivery in India in 2017, and Uber Eats has had a tough time attracting restaurants and customers in India, contesting against established local players, Zomato and Swiggy. The two cover almost 80% of the food delivery market in India. Zomato plans to up its game with this acquisition in southern India, where Swiggy has a stronghold.

While keen followers of the space were not surprised by Goyal’s announcement, key stakeholders were caught unawares: Uber Eats delivery partners, some of whom were ready to get to work in the morning, were suddenly left without work; restaurant partners without orders; and employees without positions.

For instance, 28-year-old Narayan Venkatesh Raju, a Mumbai-based delivery partner who has been with Uber Eats India for three years, started off his day as usual, logging into his account. “Instead of seeing the orders around, I received a notification asking me to contact support. When I did, the support team told me that this [Uber Eats shutting down in India] is fake news and this issue will be resolved within an hour,” adds Raju.

In a blogpost, Goyal said that Uber Eats’ delivery crew will be on-boarded to Zomato’s fleet. “All profiles have been imported and set-up on Zomato's delivery partner app. All Eats delivery partners need to do is log-in and they can start delivering,” he wrote. Even so, Forbes India spoke to multiple delivery partners, all of whom are left clueless, and waiting to hear back from Zomato on further steps.

A well-placed source with deep knowledge of the deal, on condition of anonymity, told Forbes India that all Uber Eats delivery partners will be given a “one-time appreciation” financial reward, an amount depending on their seniority and recent activity with Uber Eats. “Uber is transitioning them from Eats to Zomato at a brisk pace,” the source added. “Uber has set up centres and offline support, and audio messaging; there’s been no effort that hasn’t gone into this. Uber couldn’t inform them prior to signing the deal because of legal intricacies.”

Depending on the location, the Uber Eats courier partners will also have the opportunity to drive with Uber Moto, Uber’s motorcycle taxi service, the source added. “Uber Moto is one of Uber’s fastest growing products. This deal will allow the business here in India to focus on rides. Uber actively plans to go from 50 cities to 200 cities in India for the rides business, and much of this growth will be driven on the back of auto and Moto rides. Efforts to absorb these partners into Uber Moto is also ongoing.”

Similarly, restaurants were caught off-guard too.

For Indore-based Johny Hot Dog (JHD), which recently won the award for the ‘Most ordered dish in Asia Pacific on Uber Eats’ for its vegetarian hot dog, 70 percent of its business comes from the platform; it hasn’t yet signed up for any other delivery aggregator. “We had heard rumours, but we had no idea it would happen so soon,” says Hemendra Singh Rathore, the owner and son of JHD’s founder, Vijay Singh Rathore. “We received no official intimation from Uber Eats either; all I got was an email as an Uber Eats user, saying ‘you will no longer be able to order from Uber Eats in India’.”

Rathore says that fortunately, they have strong retail presence and recently opened their second outlet. Since Zomato has weak presence in Indore, Rathore is keen to take his business to its rival, Swiggy. “We were already in talks with Swiggy, so we will have to accelerate that conversation,” he says. “We are lucky to have other revenue streams. For those restaurants who were solely dependent on Uber Eats, this could be catastrophic.”

“The acquisition creates a strong entity to rival Swiggy, so it will be interesting to see how it plays out,” says Alisha Shirodkar, co-founder of The Belgian Waffle Co, which was associated with Uber Eats India since the past 18 months. “The overall hope is that we can find more creative ways of getting eyeballs and conversions with innovative tech strategies, and move away from the aggressive discounting trend that disfavors quality.”

The Indian market for food delivery has been hotly contested, resulting in a war of deep discounts. In August last year, hundreds of restaurants ‘logged out’ of delivery apps in protest, saying they bore the brunt of the discounts in the aggregators’ jostle for market share.

“For the first three quarters of 2019, Uber Eats India was 3 percent of global gross bookings, of incoming revenue,” the aforementioned source said. “But it comprised more than 25 percent of the losses. You know what was happening in the industry. Dara [Khosrowshahi, Uber CEO] and Nelson [Chai, CFO] have been clear from the get-go that on the Eats side, Uber wants to be Number 1 in key markets. Where they cannot do that, they will have to take measures.”

However, this measure, the source adds, is specific to India, and not the region as a whole. “Uber has thriving Eats businesses in Sri Lanka and Bangladesh. This move in India will allow it to focus on the rides business, which is on the path to profitability. Going from 50 cities in India to 200 is not an urban myth.”

245 Uber Eats employees affected
Sources say that 245 full-time employees at Uber Eats India have been affected, as their positions “no longer exist”, and they “are not part of the agreement to transition to Zomato”. Reportedly, they will be asked to apply for vacancies within Uber’s other verticals, and will stay on the company’s rolls until March 3.

“HR is now in the process of talking to employees,” a source said. “If they want to apply for jobs externally, they will be given support.”

Tweets by @forbes_india
Buyers slow to pay back retail loans
Meet Hafeez Kudroli: The star behind 'Kudroli World' is the next big thing in India