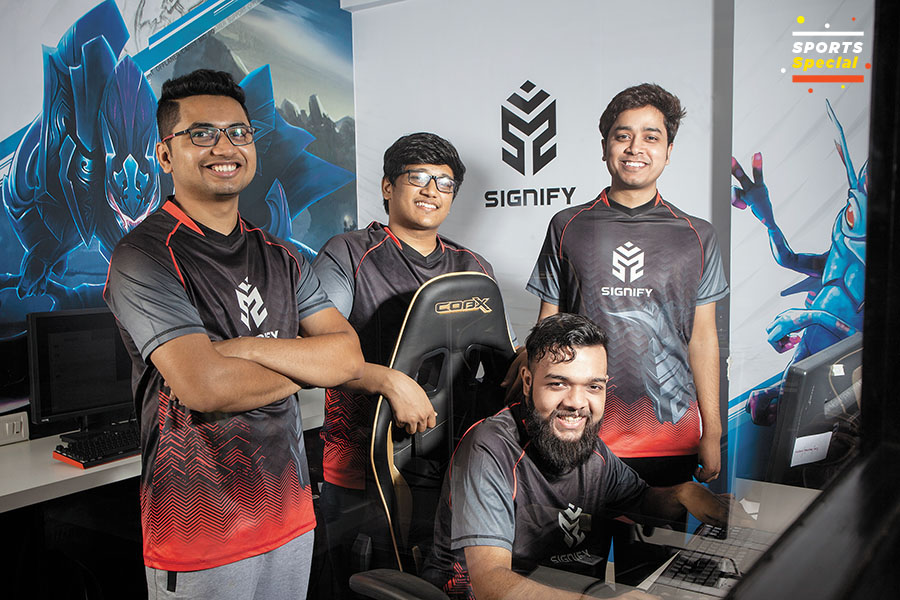 After a gruelling training session, the athletes huddle together to discuss game tactics. Dressed in shiny black jerseys, they stretch their fingers and flex their elbows as the head coach analyses their performance. A heated dialogue ensues; the team manager paces about grimly.

Soon enough, they get back to their game. But it’s no ordinary play and these aren’t conventional athletes. They’re not running, jumping or wielding a racquet. Instead, they return to their computer screens, backs hunched and headsets on, competing from behind a keyboard.

Team Signify, as the bunch of five 20-somethings is known, is the top ranked Dota-2 team in India, a video game where teams of players smite each other using fantasy characters with special powers.

Captained by Raunak Sen, 22, who goes by the name ‘MrCrowley’ when playing, Team Signify is owned—and bankrolled—by Horizon Sports, a Mumbai-based esports organisation promoted by Route Mobile. Players’ contracts include a monthly salary ranging from ₹25,000-₹40,000 as well as perks such as an apartment to live in and travel expenses to tournaments covered. Earnings from tournaments are split 70-30, with the players claiming the lion’s share and Horizon, 30 percent.

Competitive video gaming, widely known as esports, has been pulling real crowds and big money in mature markets like Korea, the US and Europe for a few years now, with top-ranked players earning up to $2-3 million a year. In India, it’s only just revving up. “Globally, Indian players don’t stand anywhere,” says Mujahid Rupani, co-founder and CEO of Cobx Gaming, another Route Mobile promoted entity that organises esports tournaments. “But as the infrastructure around esports gets built, esports will explode,” he says. Cheap data will bring more players into the fray, albeit casual ones; tournaments will allow them to showcase their skills to esports organisations who in turn can nurture them and pave the way for sponsors. As athletes-cum-influencers, they’ll then attract more players into their virtual worlds. “It’s a holistic web of interlinks that needs to play out,” says Rupani. The number of occasional viewers and esports enthusiasts is expected to grow five-fold from 4 million in 2017 to 20 million in 2021, according to KPMG. 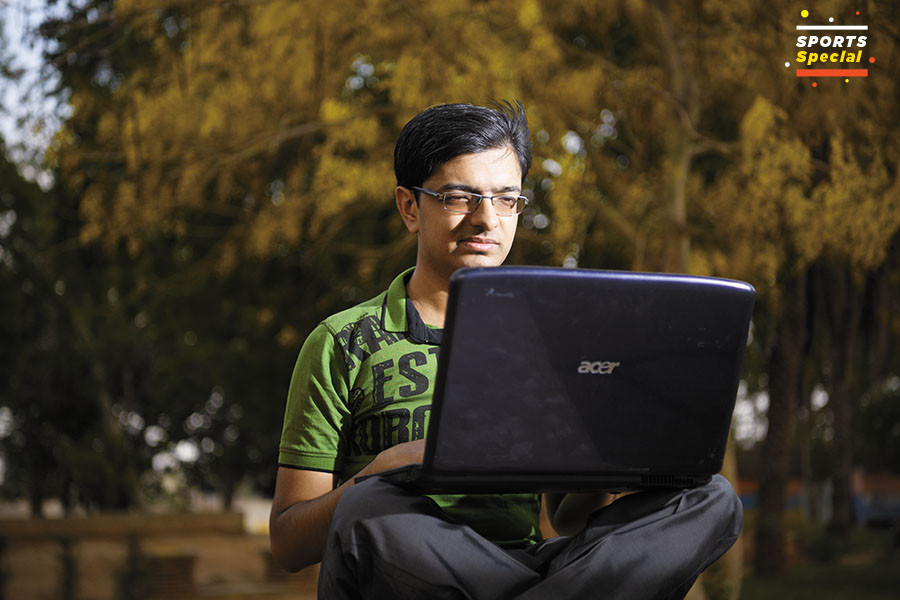 When Tirth Mehta met Hima Das at the Asian Games in Jakarta in August last year, he was in awe. The Assamese sprinter had just clinched Silver in the 400 metre race, clocking her personal best timing. But little did he know that she too was in awe of him. The bespectacled, slightly built, then 23-year-old from Bhuj had won India’s first esports medal at the Games, placing third in Hearthstone, an online collectible card game.

“She was pretty amused that one could win a medal playing video games,” says Mehta with a laugh, “but by the end of our conversation, she conceded that esports require skill and dedication to excel at, just like any other sport.”

Although Mehta’s Bronze medal wasn’t added to India’s tally—because esports was a trial event at the Games—he still gained. “It’s given me credibility,” he says. Sceptical family and friends who would often write off his video gaming obsession as a mind-dulling distraction suddenly turned around. “My parents always believed in me, but after my win, everybody else also started encouraging me to play more,” says Mehta, a computer engineering graduate and “topper” by his own admission.

“Gaming might not require physical skill [like a traditional sport], but it requires mental skill, just like chess or bridge,” says Mehta, who also plays Dota-2. Strategic thinking, quick action and optimal use of resources are some of the skills that set top players apart, he says.

Unlike Team Signify, Mehta isn’t represented by an esports organisation. To keep up his game, he practises for around five to six hours a day and participates in six to seven tournaments a year where prize money is a few lakh. Simultaneously, he earns a “decent salary” by writing content for US-based esports organisation Tempo Storm. 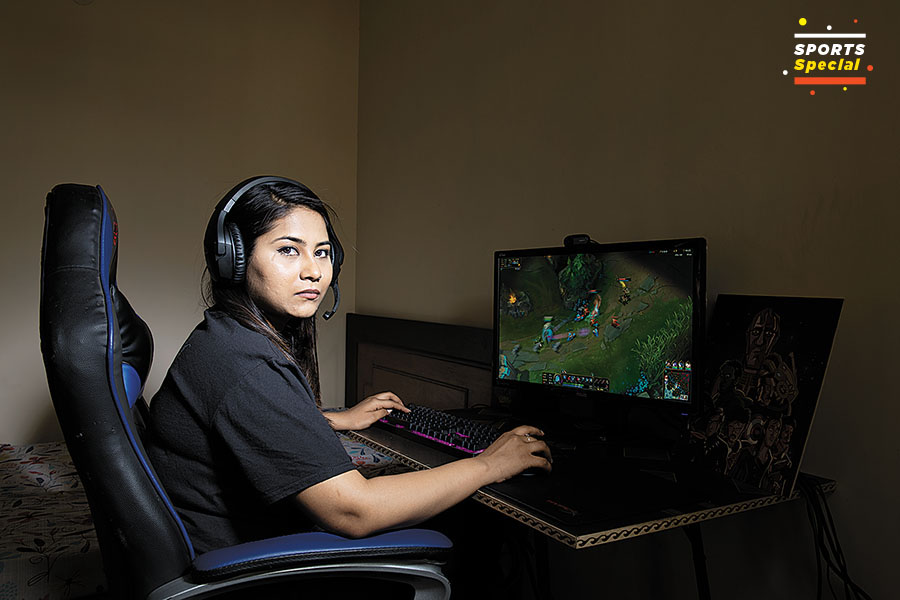 With a few deft clicks of a mouse ‘Mogambo’ tears through the targets to fight for control of a square battlefield in a verdant virtual world. Part of a five-person team, Mogambo, in this instance, has taken on the online avatar of Ashe, a white-haired archer who shoots frosty arrows at minions and monsters.

Ashe is one among 143 ‘champions’ with a unique back story and skill set that players can choose from in the wildly popular League of Legends game. “Ashe is one of my all-time favourites,” gushes Vidushi Singh Suryavanshi, the person behind the moniker Mogambo.

When she started out five years ago, Suryavanshi used a more feminine moniker, but because female gamers aren’t taken seriously, she switched to Mogambo. This despite reaching Platinum 1, one of the higher divisions based on skill, in League of Legends parlance, after a mere two to three years of playing. At the time she was the only girl in South Asia to achieve the honour. 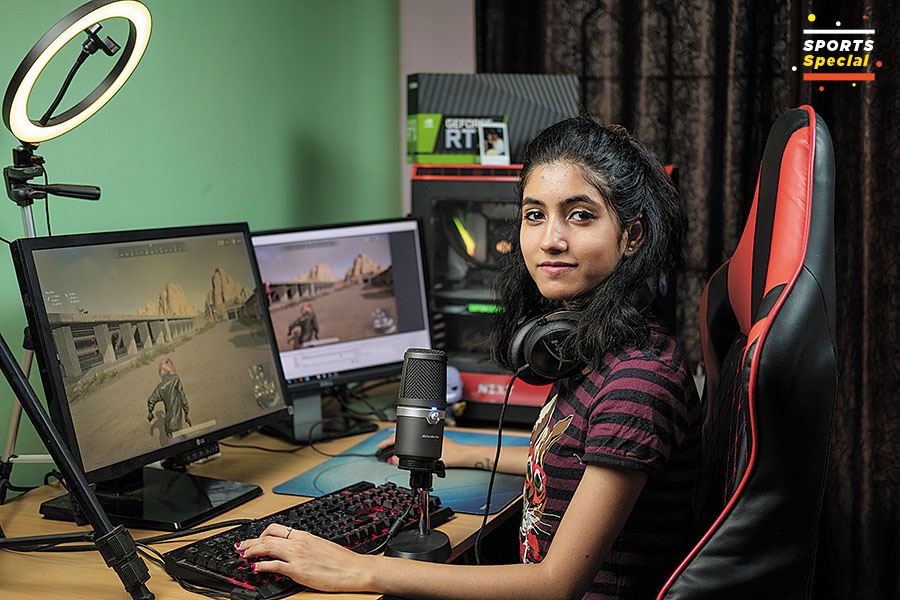 The attitude towards girl gamers led Suryavanshi to form India’s first all girls League of Legends roster two years ago, bringing together the best players from across the country. Girlaxy India, as the team is called, stood third in the NESC 2017 qualifiers, where the winning team got to play at the Esports World Championship held at Busan, Korea.

Today, in addition to playing tournaments with the Girlaxy girls, Suryavanshi holds a day job as a marketeer at a games publisher; she practises her game at night for a couple of hours, amping up the number of hours ahead of a tournament. Constant updates by the League publishers ensure that the game is ever evolving so players have to keep “studying” to stay on top, she says.

Often, gamers supplement their income by streaming their play on platforms like YouTube or the Amazon-owned Twitch. Bengaluru-based Shagufta Iqbal for instance, earns ₹20,000 a month by live-streaming games like PUBG, CS:GO and Overwatch.

“It’s one thing to be good at gaming and quite another to be good at entertaining. To stream successfully, you have to be entertaining; you have to engage the people on the chat,” says the 25-year-old who worked as a coder at Capgemini in Pune before quitting late last year to focus on streaming. Alongside, she creates content for gaming platform GamerConnect.

Iqbal live-streams two times a day for about three hours each, providing a running commentary on her moves. Her earnings come mostly from members who subscribe to her YouTube channel for ₹169 a month, in return for perks like being able to play with her. Donations are another a source of income, however, advertisement revenues are minimal as most people have ad blockers, she says. “But I still do it [streaming] casually. Serious streamers with millions of subscribers can earn up to ₹1 lakh a month,” adds Iqbal who currently counts 45,000 subscribers on her YouTube channel. 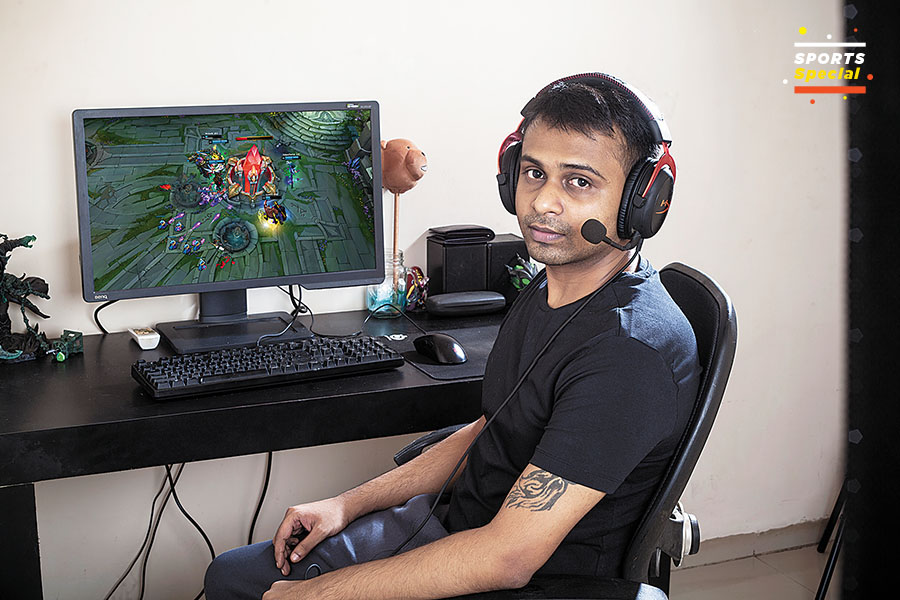 It was while watching one such Korean gamer stream League of Legends that Samarth ‘Cranko’ Trivedi, 28, was “blown away”. Until then he had been playing Dota-1 but “couldn’t find happiness in it”, as he puts it. Inspired by what he saw, Trivedi started learning the game and quickly became good at it. So much so that the Singapore-based Team Impunity cherry-picked him to join them for a local tournament. Scraping together funds from family and friends, as well as with some help from Entity Gaming, a Mumbai-based outfit, Trivedi flew in to Singapore and won second place with his teammates.

On his return to Mumbai (the contract was only for one game) Trivedi, who would practise for 14 hours a day, joined Tyranny, a top ranking Indian team in mid-2017. Despite not having a coach or a manager, the team qualified for the Esports World Championship in September 2017. Sadly, they had to give the games a miss as no one was willing to sponsor them. “There’s a lack of awareness about esports in India... we desperately need investment in infrastructure,” laments Trivedi.

“It’s not just about organising tournaments [several now take place in India]; esports organisations need to nurture players, create brands out of them. Then the sponsors will follow,” he says.

Rupani of Cobx Gaming concurs. While the number of esports tournaments taking place in India has gone up, as has the prize pool from about ₹3-3.5 lakh two years ago to ₹5 lakh today, much is still wanting. “To begin with the government needs to recognise esports as a sport. Once sponsors are aware of the scope of esports, money will flow in, making it a sustainable career option for players,” he says. International teams also need to be enouraged to play in India, to enable a “knowledge transfer”, he says, much like how cricket’s Indian Premier League shaped up.

Moreover, the lifespan of gamers is brief. Eye-hand coordination is critical in gaming leading most pros to age out by the time they’re 26. An afterlife as a commentator or analyst is still untested in India.

Until that develops—another four to five years from now, predicts Rupani—esports will not be a long-term career option.

As for Trivedi, he now has the backing of Pakistani esports organisation Portal Esports. His teammates are based in the neighbouring country and they practise online, logging on at a specific time every day. “I’m looking forward to playing tournaments with them. I want to make it big internationally. This is my career.”

Tweets by @forbes_india
Emerging technology and its impact on business
Kaspersky Lab: From prevent and protect to detect and predict