With StoreKing, Sridhar Gundaiah has combined ecommerce with traditional retail distributors and small shopkeepers to reach the rural hinterland 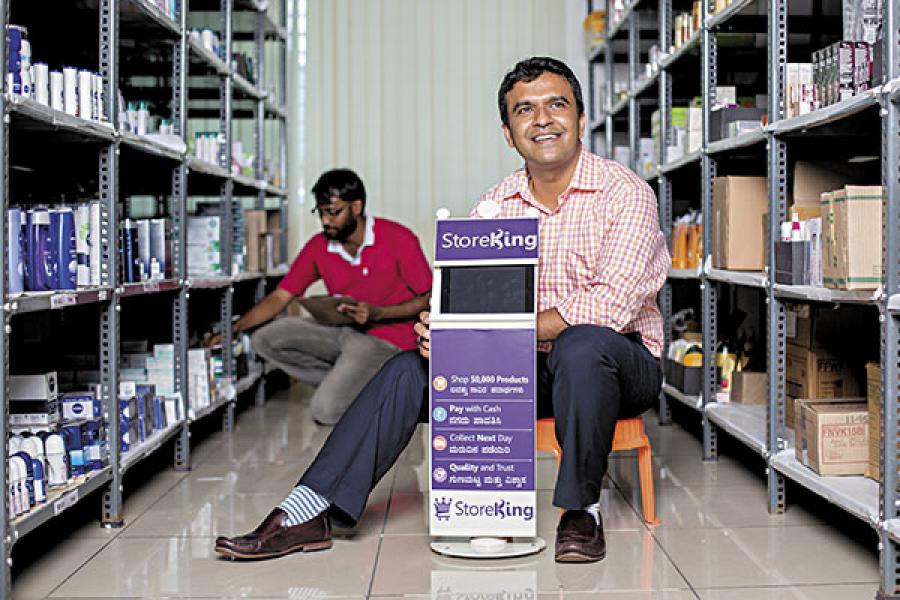 Rural India has a unique problem when it comes to shopping online: Every village does not have a pin code, which makes deliveries difficult; moreover, most people cannot write their addresses in English. As a result, despite having the money and the intent, people living in small towns and villages are unable to shop online.

Riding on the well-established networks of distributors and small retailers—something that traditional FMCG companies have built over decades—StoreKing sets up small kiosks (each comprising a tablet and an internet connection) at neighbourhood shops where shopkeepers can assist customers select products from the StoreKing online shopping platform, and get them delivered to the shop within 48 hours; customers simply pick up their deliveries from the shop. While customers get goods (that are not discounted) of their choice, the shopkeepers are happy to make a fixed commission per sale (which, on an average, is Rs 6,000 a month; more enterprising shopkeepers even make Rs 32,000 per month).

But for all his intentions of combining traditional retail networks with modern-day ecommerce to service a huge untapped market, the man behind StoreKing, Sridhar Gundaiah, 33, did not find any takers among Indian investors. None of the top venture capital (VC) firms, who have invested in India’s ecommerce companies, put in their money in Gundaiah’s parent company LocalCube Commerce. Their argument: There already exist large ecommerce players like Amazon India and Flipkart who would eventually become the default ordering vehicles for consumers. So, why would you need this intermediate layer?

Then, in 2012, Gundaiah was introduced to Luxembourg-based venture capital firm Mangrove Capital Partners. “Seemingly, Sridhar couldn’t find the excitement for his concept [among investors] in India,” recollects Hans-Juergen Schmitz, Mangrove’s co-founder. He says that Gundaiah’s initial pitch to them was “essentially a plain vanilla health and beauty etailing concept”, something that they were not “particularly excited” about.

However, they eventually came around to Gundaiah’s proposition of doing business in rural India with help from the local shopkeeper, who is perceived as a friend and confidant. “From that perceptive, if I compare it to traditional ecommerce where customer acquisition cost could be in the $10 to $15 range, here we are talking less than a dollar,” explains Schmitz. “We certainly encourage our entrepreneurs to think big, try models and concepts that challenge the status quo. Our initial investment in Skype is the best attest to this.” In June 2012, Mangrove Capital Partners invested $500,000 in Gundaiah’s company and has since invested a total of $5 million, and been given a board seat.

“I think the confusion or the lack of clarity in the mind of the VCs was around this company’s business and whether it was a direct overlap with the ecommerce world. Obviously, these things get better answered when you start showing volumes and scale,” says Kanwaljit Singh, former managing director of VC firm Helion Venture Partners, and founder of early-stage investment fund Fireside Ventures. Last year, Singh joined LocalCube Commerce as an independent board member.

On June 8, LocalCube Commerce announced that Axiata Digital, a wholly owned subsidiary of Malaysian telecom giant Axiata Group Berhad, had invested $16 million in the company for an undisclosed stake. But, the biggest validation of Gundaiah’s startup came in the last six months, with StoreKing entering into partnerships with Amazon India, ShopClues, Goibibo, and Paytm. “They [Amazon] came back towards the end of last year and said, look we have tried it all—their words, not mine—and we think StoreKing is the best platform to work with. It speaks of Sridhar’s relentless efforts in building a distribution network, below the radar screen,” says Schmitz.

As of now, close to 16,000 retailers across Gujarat, Maharashtra, Goa, and all the five southern states are connected to StoreKing’s online platform (the company estimates there are at least 30 million rural retailers in India). Having started with just cosmetics, StoreKing has now diversified into apparel, home and kitchen products, electronics, jewellery, food and nutrition, sports and fitness. It also offers digital services such as payment of utility bills, travel bookings, mobile wallets and mobile phone recharges. Besides, in partnership with the State Bank of India, StoreKing has made around 600 of its retailers into quasi-ATMs.

Overall, StoreKing sees around 50,000 transactions per day—6,000 product purchases, and 44,000 deals related to digital services. As of the last fiscal, StoreKing had revenues of about $40 million (about Rs 267 crore). At present, it is clocking monthly revenues of about Rs 30 crore, a huge jump from the Rs 1 crore it reported in its initial year of operations. Gundaiah says the company is profitable only “at the stage of delivering a product to a retailer. Overall profitability is lower, partially negative on the books, as we are expanding.” Close to 40 percent of its revenues come from the sale of electronic goods, in particular mobile phones. “We sell about 300 to 400 units of phones per day. And these are smartphones priced between Rs 5,000 and Rs 8,000,” says Gundaiah. 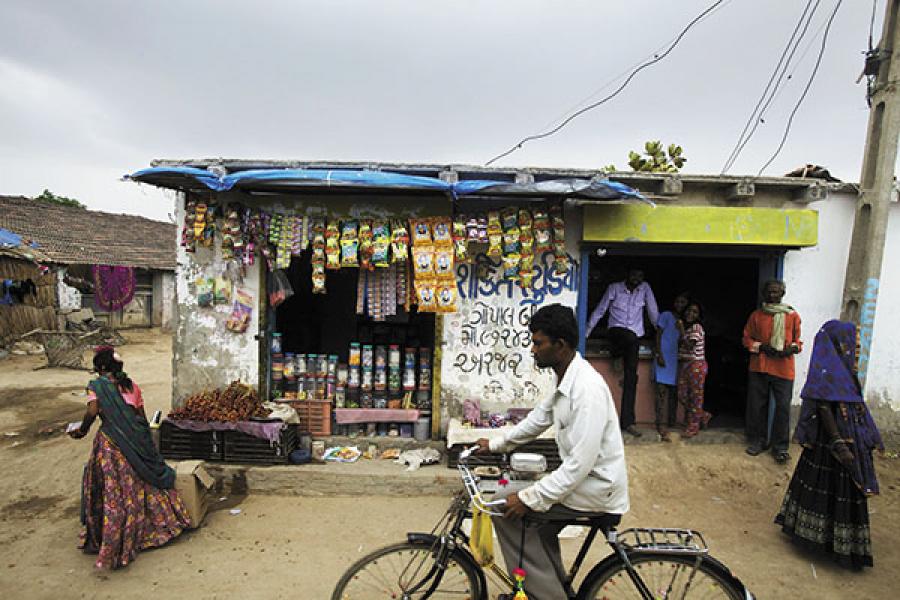 Image: Getty Images
StoreKing reaches customers in the remotest parts of the country with help from local shopkeepers

Gundaiah’s father grew up in the Karnataka village of Hanchipura, 110 km from Bengaluru, before moving to the state’s capital. Gundaiah grew up in suburban Banashankari, and graduated in computer science from BNM Institute of Technology, while working part-time as a programmer at ProInt Software in Bengaluru. After graduation, he took a loan of Rs 6 lakh and went to the University of Greenwich, London, for a master’s degree in internet technology and ecommerce. By this time he had also worked as a programmer at Yellowtag in London. In early 2007, he returned to India and got a contract job with IT services company Mphasis.

“After my master’s degree, I was very sure that connecting people by using internet as a technology layer was very important,” he says. With this in mind, Gundaiah founded his first startup Yulop WebSense in mid-2007. The startup, of which 65 percent was owned by angel investors, provided local content to Navteq, a US-based company (which had been acquired by Nokia), that provided geographic information system data and electronic navigation maps. With 260 employees, Yulop, using mobile technology and GPS navigation systems, collected photographic data as well as the latitudinal and longitudinal coordinates of places in India. He exited Yulop in 2010, but continues to hold a small stake in it.

It was during these years that Gundaiah’s connect with rural India began to get stronger, aided by his frequent visits to Hanchipura. “I clubbed my understanding of what is rural and my experience with small tech startups, and I said, ‘Why don’t I solve problems for rural India?’” says Gundaiah. “In StoreKing, that’s the bottomline: How do you take technology to rural India.”

The idea of StoreKing, however, was born out of another startup, via.com (formerly known as flightraja.com which was incorporated in 2007), an online travel bookings portal where Gundaiah worked at after exiting Yulop. StoreKing’s model of partnering with traditional retailers was at the heart of via.com. At via.com, Gundaiah was looking to expand the company’s profile beyond travel, but its investors and promoters didn’t want to diversify. That’s when he decided to go solo.

Via.com, says Gundaiah, is all about connecting a retailer, who is ambitious enough to become a travel agent. And this is how StoreKing operates. From a logistics perspective, StoreKing has created a network of master and regional franchise partners, who are typically the big local distributors in the FMCG industry and courier companies. This entire franchise network runs on a tech-enabled StoreKing platform. “Everything has been insured and responsibility has been equally shared,” says Gundaiah. He claims the rate of lost shipment is 0.2 to 0.3 percent.

Ecommerce player ShopClues, which is valued at over $1 billion, has recently partnered with StoreKing. ShopClues’ online catalogue can now be accessed at the StoreKing kiosks. When a customer places an order, ShopClues ships the product to the StoreKing warehouse from where the delivery is made. Raunak Raheja, senior director, categories, at Shopclues, is happy with the results of the company’s 40-day pilot project with StoreKing. “I believe the team [at StoreKing] is doing a phenomenal job,” he says.

And it’s not just ShopClues who has an eye on India’s rural market. Amazon India’s rural reach initiative, internally called Project Udaan, has been in the works since mid-2015. It appoints associates across retail outlets and provides them with a PC-based website. The associates train store owners to help customers find and buy products online and earn a commission. As part of Project Udaan, Amazon India has tied up with StoreKing (in a manner similar to Shopclues’ partnership).

Kishore Thota, head, consumer marketing, Amazon India, says, “StoreKing has laid out a way to reach those stores in remote areas very effectively and we want to leverage on that network.”

Sreedhar Prasad, partner, ecommerce, at KPMG in India, believes rural India has a “large set” of customers with “high” disposable incomes. In context to StoreKing, he says, “Startups are focusing on this market through unique business models wherein variety and access to products precedes discounting.”

StoreKing’s independent board member Kanwaljit Singh thinks the startup has just about scratched the surface. “They could become the largest distribution pipeline into small-town India,” he says. As validation, FMCG companies such as HUL and P&G have already begun to use the services of StoreKing. “Despite the best efforts of the largest consumer companies in India, their reach to these markets would still be more restricted than what StoreKing can achieve,” says Singh, who was a former high-level executive at Hindustan Unilever. StoreKing also has “the power of data”, he adds. Given that StoreKing knows what is being ordered on their platform from where, “think about the kind of analytics that is possible.”

Gundaiah has set his sights on the moon: “I want to conquer India. We want to be another [distribution] channel, apart from ecommerce.” In a bid to broaden his retailer base, he has partnered with Indian Oil, which has 27,000 petrol pumps across the country. The StoreKing kiosks are expected to augment the revenue of petrol pump owners.

Moreover, he is also thinking of replicating the StoreKing model across Southeast Asian markets such as Indonesia and Malaysia. This is where the funding from Axiata Digital would play a vital role. “StoreKing has created a platform that solves the fundamental constraints in our markets with last-mile logistics and payments, while building trust among mass market consumers,” says Mohd Khairil Abdullah, CEO, Axiata Digital. Gundaiah is also looking at another round of fund raising of more than $100 million, six-months down the line.

“He is a fantastic entrepreneur, modest and humble. He doesn’t necessarily seek the limelight of the press or public recognition, which we like a lot,” says Schmitz.