Medication apart, keeping the silent killer at bay requires behavioural changes. Abhishek Shah steps up to the plate with Wellthy Therapeutics, an AI-based mobile app with a focus on results 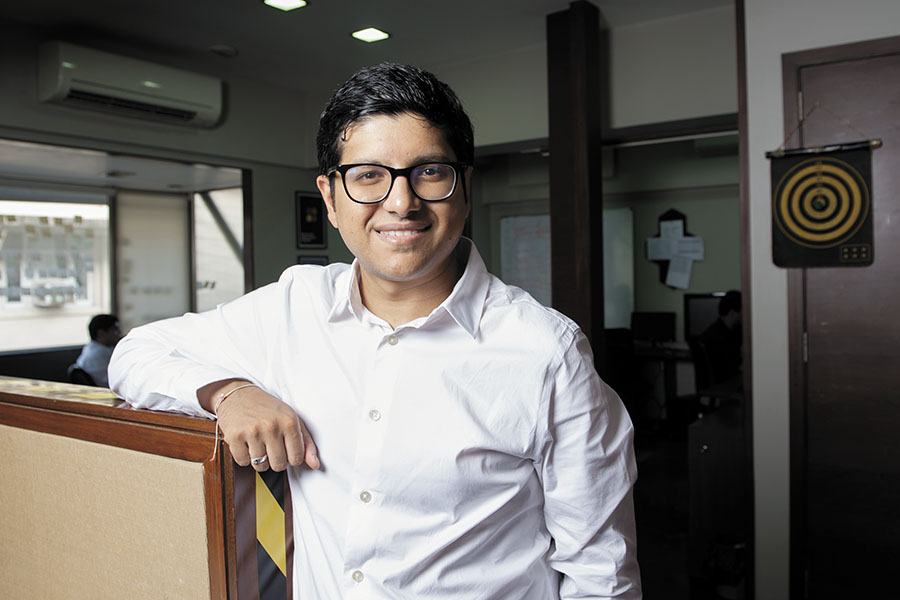 Abhishek Shah, CEO, Wellthy Therapeutics, aspires to achieve a full-fledged Asia presence in four to five years
Image: Mexy Xavier
Smruti Daru is a woman who juggles many roles: Colleague, mother, daughter, wife. Her waking hours are brimming with tasks and expectations—from preparing meals for her school-going son to stressful assignments at work.

In 2009, when she was 53, Daru was diagnosed with type 2 diabetes— a condition where the body loses its ability to respond to insulin, leading to high blood glucose levels. Unlike with type 1 diabetes, where the patient is administered insulin through injections, type 2 diabetes can usually be managed through diet, exercise and pills, at least initially.

Following the diagnosis, Daru was prescribed medication and advised on the lifestyle changes needed to keep her diabetes in check. However, she found it impossible to tweak her schedule. And before she got accustomed to it, her initial dose of pills had to be doubled and then quadrupled. “I didn’t know what was happening to my body, I felt helpless,” she recalls.

Stories similar to Daru’s have become increasingly common in India. According to the World Health Organization (WHO), there are 54 million type 2 diabetics in India, earning the country the infamous moniker of the ‘diabetes capital of the world’. WHO data shows that diabetes caused 1.5 million deaths globally in 2015, and that number is only increasing. The gravity of the situation clearly demands an approach that goes beyond traditional diagnosis and treatment.

His parents being health care entrepreneurs—his father in pharmaceuticals and mother in consumer medical product sales—Shah was exposed to the sector at an early age. He started his career in the family trade, working with his uncles in clinical research. After completing his MBA from the Indian School of Business, Hyderabad, Shah navigated from position to position, industry to industry, gaining broad experience in fields like media and entertainment, venture capitalism and entrepreneurialism. Through it all, one thing stayed the same: “I was excited about new business models, new businesses coming out of nowhere. I knew I wanted to build something, but I didn’t know what I wanted to build.”

Ultimately, the world Shah grew up in came back to him. At the end of 2015, Shah, along with Prayat Shah, Dr Maaz Shaikh and Mayuresh Joshi, formed Wellthy Therapeutics. The company’s mobile app acts as a personal health coach, using a patient’s clinical data and habits to provide motivational and consistent advice on healthy lifestyle choices.

For Daru, the app, which advised her to avoid certain foods and sleep more, had an unbelievable effect: With Wellthy’s guidance, she dropped her glycated haemoglobin levels from 8.1 percent (poor control) to 6.1 percent (good control) and also shed 2 kgs in 16 weeks. (Glycated haemoglobin is a measure of a person’s average blood sugar level over the past 3 months.) “I felt that God had sent an angel to help me,” says Daru of the Wellthy app.

Lately, the app has been endorsed by some major organisations. In 2016, Wellthy partnered with the New Delhi-based Research Society for the Study of Diabetes in India (RSSDI) to become an application that doctors could prescribe to their patients. At an American Diabetes Association conference in June this year, Wellthy presented the results of a clinical trial that established itself as the first South Asian digital therapeutics company to publish positive clinical outcomes.

On a Monday morning in June, this writer is offered a seat on a bean bag at Wellthy’s office in Churchgate, Mumbai. “Sorry, we’re low on space!” apologises the receptionist.

Evidently, Wellthy is outgrowing its humble origins, with people huddled around shared desks and a newly-opened second office down the road for the spillover staff. Wellthy’s early growth and success reflects in the crowded rooms of the energetic studio.

It’s also visible on the clean-shaven face of Shah as he narrates the origins of his company. The biggest inspiration behind Wellthy, he says, are his parents, both of whom were diagnosed with hypertension over a decade ago. His mother was also recently diagnosed with diabetes. “My parents are chronic disease patients. They are both health care entrepreneurs with full access to health care and no dearth of health literacy,” he says. Yet, they followed a similar path to Daru, moving from zero pills a day to a few pills a day.

The issue, says Shah, highlights the challenge of behavioural change, which is a prerequisite to eating healthier, exercising and taking pills consistently. “What I realised is that every business is about behavioural change,” he says. “For example, telling someone not to hail a cab and to instead press a button on the phone requires a huge behavioural change. I was amazed to see that despite incredible advances happening in consumerism through behavioural change, nobody was applying the same experience to health care.”

And the world of health care, specifically with regard to chronic diseases like type 2 diabetes, is perhaps the perfect ecosystem for the application of the behavioural change model. In the case of diabetes, the effects of a behavioural change can be precisely quantified through the glycated haemoglobin (HbA1c) test.

The mathematical simplicity of the behavioural model excited Shah.

“Yes, I’m an entrepreneur, but I’m an engineer as well. As an engineer, I love mathematics, and diabetes is a mathematical equation that can be solved,” says Shah, who holds a BSc in chemical and biomolecular engineering from Georgia Tech University in the US.

He says there are a finite number of factors on the left hand side of the equation that you can adjust—a patient’s sleeping habits, diet, fitness and medication—and then one number on the right (HbA1c levels) will readjust.

“And that’s so amazing because it means that tech can play a forward facing role,” he says.

With this, Wellthy was engineered from the get-go as a company focussed on outcomes—improving the variables on the left side to maximise favourable outcomes on the right. The app handholds patients through their day, motivating them to log their diet, monitor sugar levels, their weight and exercise routines.

When Wellthy started, Shah and his team were not certain what form its revenue model would take. Instead, they were focussed on creating a product that improved outcomes for the patient, trusting that revenue would follow, he says.

With this as the core of his philosophy, Shah built a team comprising a cadre of doctors and behavioural psychologists led by Dr Shaikh, currently vice president, product and clinical innovation. They had met at a health care conference where the two were “the only idiots who cared about diabetes”. Wellthy also consults a star-studded group of engineers, doctors and diabetes specialists. All of this “because, frankly, as you improve your outcomes, there is a value that you are creating. And what’s the point if you don’t show actual outcomes?” Shah asserts with the Hippocratic honesty of a real-life physician.

Wellthy also places a special focus on the culture of India and Asia in crafting its app. Before Wellthy entered the market, many companies attempted to apply diabetic treatments effective in regions like the UK and US to Asian territories with little effect. “The genetic makeup of Asians is different, our behaviour and values are different, our cultural nuances are different,” explains Shah.

So, Wellthy made a conscious decision to focus its efforts on Asians. This is a wise business move given that two-thirds of the world’s diabetics live in Asia, according to WHO data.

To date, Wellthy remains self-funded and Shah has invested around ₹2.9 crore into the venture, though the company has yet to break even. Currently the Wellthy app is free to download on Google Play store and Shah says he will launch a paid product soon.

By pursuing unique partnerships with hospitals, doctors, patients and insurance companies—who are more inclined to insure diabetics who use a clinically-tested app like Wellthy—the company is laying the foundation of its future growth.

“Wellthy is extremely doctor friendly,” says Dr Sarita Bajaj, president of RSSDI, the largest organisation of diabetes health care professionals and researchers in Asia. “The programme encourages doctors to gauge the activities of patients and work with them.” The RSSDI, Bajaj says, is leveraging Wellthy’s AI technology as a research tool, collecting data points of app users and non-users to measure its effectiveness. From what Bajaj can tell, the results are compelling.

“Wellthy is extremely valuable and innovative,” she says. “It’s going to be the way forward.”

Later this year, Wellthy will go live in the Middle East, with dreams of achieving a full-fledged Asia presence in four to five years.

Shah says Wellthy was born a week after his son Kabir came into this world. This balancing act between work as a first-generation entrepreneur and life as a first-time father “shattered every glass ceiling of what I thought I was capable of”, he says. It takes a supportive family and a lot of drive to pull it off. “But if you do it,” Shah says, “you’ll find a capability that you never knew you had”. And people with diabetes are the beneficiaries of this capability.