Cars24, India's first unicorn in the auto segment, has grown rapidly during the pandemic. Can it maintain its pace and focus?

Left to right: Cars24 co-founders Gajendra Jangid, Ruchit Agarwal, Vikram Chopra and Mehul Agrawal Photo: Amit Verma Vikram Chopra was always convinced about one common strand between life and poker: It's not about the cards you're dealt, but how you play your hand. In July 2015, when Chopra and his co-founder and friend Mehul Agrawal stepped down from leadership roles at online home furnishing brand FabFurnish, the duo knew they hadn’t played the cards well. The venture ended in a raw deal for them. Both exited.  In August, along with friends Ruchit Agarwal and Gajendra Jangid, they returned to the drawing board and co-founded online used-car platform Cars24—a high-stakes bet considering they were among the late movers in the segment. The start wasn’t great: Cars24 sold 18 cars in its first month. A year later, in November 2016, Chopra—an avid poker player—was dealt another bad hand: Demonetisation. “We had no idea how things would pan out,” recalls Mehul. “Cash went out of the system and revenues nosedived,” adds Ruchit. In July 2017, came another challenge: Goods and Services Tax. The tax rate for new and old vehicles was the same, at 28 percent. As the Cars24 team was clawing its way back came another bummer in 2018: The collapse of Infrastructure Leasing and Financial Services (IL&FS), which triggered a crisis in the non-banking financial companies’ sector. 2019 brought little respite, with the auto industry, already reeling from a year of slowdown, grappling with the migration from BSIV to BSVI engines, and old inventory flooding the market. “Doesn’t it happen sometimes, while you’re driving, that you don’t see an approaching speed breaker,” asks Jangid. “It makes everyone in the car jump in their seats.”

Cut to March 2020, when the Covid-19 pandemic and lockdowns set in. “It looked like what we built in five years had become zero overnight,” says Chopra. Business recovery, he presumed, would at best happen by the end of the year or by March-April 2021. “I even thought that 2021 is lost.” The other concern was about how much share Cars24 would eventually reclaim. “Everything was in flux,” says Ruchit.

Eight months later, those fears have proven to be unfounded. In end November, Cars24 raised $200 million in a series E round of funding, which valued it at over $1 billion and made it the first unicorn in India’s auto segment. Chopra and his friends aren’t celebrating, yet. “Value creation matters more than valuation,” says Mehul. The unicorn tag, chips in Chopra, is more valuable to the world than to us. “All four of us are still very hungry and motivated to do more.”

They haven’t done too badly so far. From selling 18 cars in the first month, Cars24 is selling 15,000 a month now. Gross revenue in FY20 was Rs 3,065 crore, from Rs 417.64 crore in FY17. Its footprint has expanded from 12 cities in the first three years to over 130 cities now. Losses, which were Rs 76.35 crore in FY17, rose to Rs 325 crore in FY19, and reduced to Rs 277 crore in FY20. Market leader True Value, Maruti Suzuki’s pre-owned car network, started in 2001, and sold 4 lakh cars in FY20. Cars24, in comparison, sold over 1 lakh, and is now clocking a run-rate of 1.8-2 lakh for FY21. Investors in the company are delighted. According to DST Global—led by Israeli-Russian billionaire Yuri Milner, and which led the latest funding round in Cars24—what has worked for Cars24 is the way in which it stands out in a cluttered market. “Cars24 has pioneered a significantly differentiated experience for the customer and dealer by deeply leveraging data and technology, resulting in world-class operational efficiency and market leadership,” says Rahul Mehta, managing partner, DST Global.

The startup has raised $400 million in Cars24, from investors including Sequoia Capital. Sequoia says the startup has taken a stab at solving the pain point of consumers. Historically, sellers didn’t get the right value for cars, while buyers got stuck with sub-standard vehicles, says Mohit Bhatnagar, managing director, Sequoia Capital India. The problem, he adds, is acute in tier 2 cities and beyond, where options are limited. “Cars24 has taken its technology and expertise to these smaller markets, effortlessly capturing a growing user base.” Its unique home-inspection feature, he says, has enabled them to expand rapidly, adding over 30 cities in the last couple of months. “There is a massive headroom to grow.” Growth potential is indeed immense. Take, for instance, the penetration of used cars. In 2019, the US sold 39.4 million used cars, while China sold 14.9 million, according to a McKinsey report; in India, it was 4 million. Another positive for India’s used car market is the low share of organised players. While in FY11 the organised market was 10 percent, in FY19 it increased to 18 percent, found a study by JM Financial; 32 percent of the market comprises cars sold directly from customer-to-another. Customers, the report says, are fast migrating to organised players. The dynamics of the market—in FY19 over 4 million used cars were sold in India as compared to 3.4 million new cars—is also in favour of pre-owned cars. In 2015, though, the dynamics though were not as favourable for Cars24. Reason: It was a late entrant. Rival CarDekho had been operational since 2008, CarTrade since 2009 and Droom since 2014. Chopra remained undeterred. A poker rule laid down by Mike McDermott, a fictional character played by Matt Demon in the movie Rounders in 1998, came handy: “If you can’t spot the sucker in your first half hour at the table, then you are the sucker.” The co-founders were quick to spot a sucker: Rivals, each of whom was focusing on car buyers. The game was all about listing, classified advertising, cold-calling, having an asset-light model, and zero ownership in terms of addressing the problems consumers faced. Cars24 came up with a trump card: Target the seller, and kill the multiple pain points. It offered to take care of car documentation, transfer of registration certificates (ownership), and paying off existing loans or fines, if any. “Before we came into the picture, everything had to be individually done by the seller,” says Chopra. 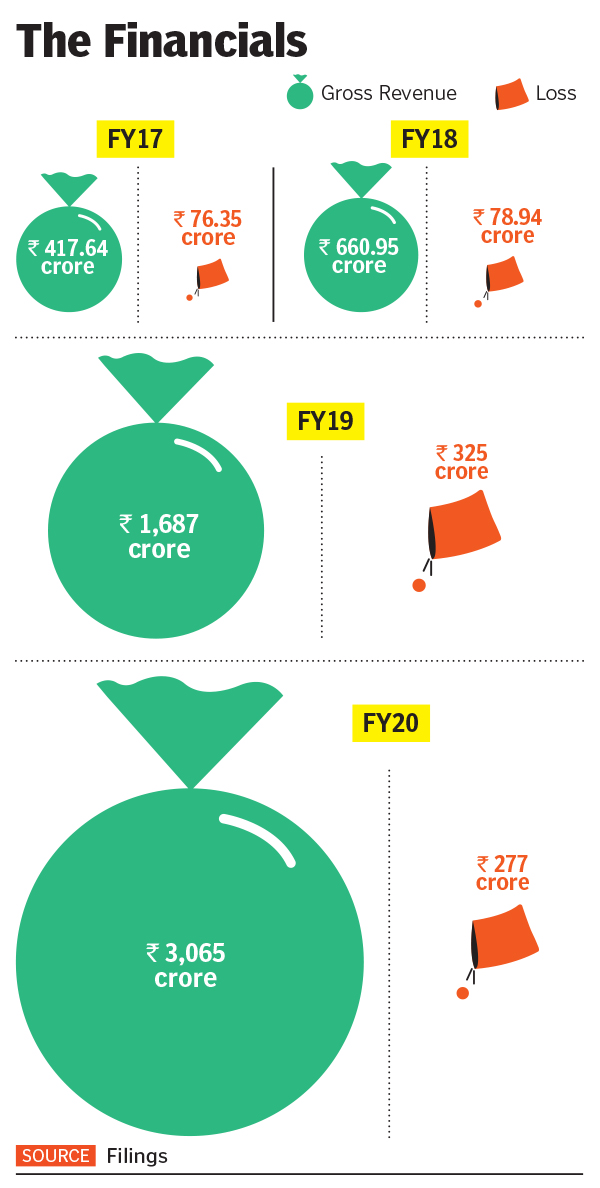 Cars24’s differentiated offering and proposition was largely inspired by the FabFurnish experience. “Supply is a much more critical piece to solve,” says Mehul, since that is where the real differentiation takes place. At FabFurnish, he adds, the co-founders often defined strategy based on chasing capital. “That was a big mistake. Capital has to chase strategy,” he says. In their second venture, Mehul and his friends seem to have got this part right. Apart from transparency in selling cars and getting a fair price, what gave this startup an edge was the speed of transactions. Processes that would take days, if not weeks, were now taking a day, often between 60 and 90 minutes.

“What Domino’s did to pizza in terms of delivery, they did to cars,” says Anil Joshi, founder of Unicorn India Ventures. “Customer delight is what made them a popular choice.” At times, he adds, startups and entrepreneurs are so engrossed with the bigger opportunity that they tend to overlook the smaller details that matter. “Though the growth achieved during the pandemic won’t be a regular thing, the Cars24 founders have had great hits.” There have been misses as well. From being rejected multiple times by investors for being a late starter to being overlooked for having a capital-intensive business model, Chopra and his team faced multiple roadblocks. But they didn’t lose hope. “We just needed one guy to say yes,” says Chopra. In June 2018, four lined up with that nod—KCK , Kingsway Capital, MPGI and Sequoia Capital India—and a $50 million cheque. Yet, getting marquee names on board didn’t make it easier to raise more capital. “Last year, series D was our toughest experience,” Chopra recounts, explaining the paradox. At the seed stage, an entrepreneur is selling an idea. By series A and B, she is selling growth. “Next—series C, D and E—you are pretty much selling everything,” he says. “Though we ticked all the boxes, new boxes kept popping up. I would have spoken to over 50 investors.” What eventually worked in their favour was that business gathered steam: Cars24 was present in 72 cities, and closed FY19 at Rs 1,687 crore in gross revenue. “If there is growth, everything else will fall in place,” he says.
During the pandemic, when things looked gloomy to begin with, the used car segment got a massive tailwind on the back of consumers opting for personal vehicles for transportation, which were perceived to be safer than the shared mode. The rebound in the business came at lightning speed:  From 21 percent of pre-Covid times in May, to 101 percent in August and 122 percent in October. What also helped in creating most of the tailwinds were some swift moves: Ramping up home-inspection of cars as sellers were apprehensive about stepping out, foraying into bikes, starting the lending of used cars, and launching a car servicing business in Delhi-NCR. Can Cars24 maintain the pace without losing focus, or is it driving too fast? Chopra says that the venture is under firm control. “Looking back, we could not have survived these five years had we not been together,” he says. “Because we were doing it together, even facing crises was fun,” he smiles, although he is quick to stoically add, “We still have a long way to go.” In an email to employees on November 24, when Cars24 was valued as a unicorn, Chopra stressed on the need to stay grounded and humble. “We have had a nice little milestone to celebrate. Next one would be $10 billion,” he wrote. “We are a unicorn, but we are nowhere close to be done yet.”