Getting news in the times of internet shutdown

Through Wi-Fi langars and community networks, journalists have been trying to get information on the farmer protests out, but delays and difficulties abound

A farmer using a mobile phone while resting in the back of a tractor trolley on a blocked highway during a protest against new farm laws, at Singhu Border (Delhi-Haryana) in New Delhi, India.
Image by Raj K Raj/Hindustan Times via Getty Images

On January 26, Nidhi Suresh of Newslaundry travelled with farmers from the Singhu border to Red Fort but could not send any information back to her newsroom. The same day, Asmita Nandy of The Quint could not look up the speeches that protestors at the Singhu border kept referring to. On January 27, independent journalist Saahil Murli Menghani tweeted that he could not upload videos from the Republic Day tractor rally on Republic Day itself. On January 29, a group of people at the Singhu border pelted stones at protestors. Himanshi Dahiya of The Quint, who was present at the site, could not relay the information back to her editors. Neither could Menghani post a live video. On January 30, Menghani tweeted, “Unable to put reports as 2G speed internet here at Tikri. No worries. Uploading of reports will NOT stop. Even if that demands walking a few KMs. Won't let this attempt to hinder ground reportage succeed.” On February 1, independent journalist Sandeep Singh saw trenches being dug up at the Singhu border, barricades being erected but could not tweet about it to his 29.6 thousand followers. Since January 26, mobile internet services have been intermittently suspended in most of Haryana and at the Delhi borders. In Delhi, that meant complete shutdown of mobile internet services in the border areas, and in Haryana, that meant no bulk SMSes in addition to a suspension of mobile internet. The aim, at least as stated by the Haryana government, is “to stop the spread of disinformation and rumours through various social media platforms, such as WhatsApp, Facebook Twitter, etc. on mobile phones and SMS, for facilitation and mobilisation of mobs of agitators and demonstrators who can cause serious loss of life and damage to public and private properties by indulging in arson or vandalism and other types of violent activities”. But the step has meant that not only have protestors been cut off from access to information but journalists reporting from the sites too have been cut off from their newsrooms, making it difficult for them to look for information, verify facts, gather context or relay information. For many of the journalists Forbes India spoke to, the situation was not unprecedented. They all remembered how mobile internet services had been suspended in the heart of the capital in December 2019 during the protests against the Citizenship (Amendment) Act. Communication with newsrooms, fact-checking becomes difficult While reporting from the ground, journalists often verify facts online before relaying information back to the newsroom. “At the Singhu border itself, a lot of people told me about speeches that were uploaded the previous night, on Monday [January 25] night. I wanted to check on these things on the ground [to gain context about the situation], but even that was an issue,” Nandy, who has reported from Singhu and Ghazipur, says. For instance, when freelance journalist Mandeep Punia was detained on the night of January 30 at the Singhu border, Suresh and her cameraperson were at Singhu border but at a different spot. They heard rumours that another journalist, Dharmender Singh, had been detained. “We had no idea who they were. We couldn’t look up anything, and it was completely chaotic,” she says. Singh, a journalist with Online News India, was ultimately let go while Punia was granted bail on February 2 by a Rohini court. 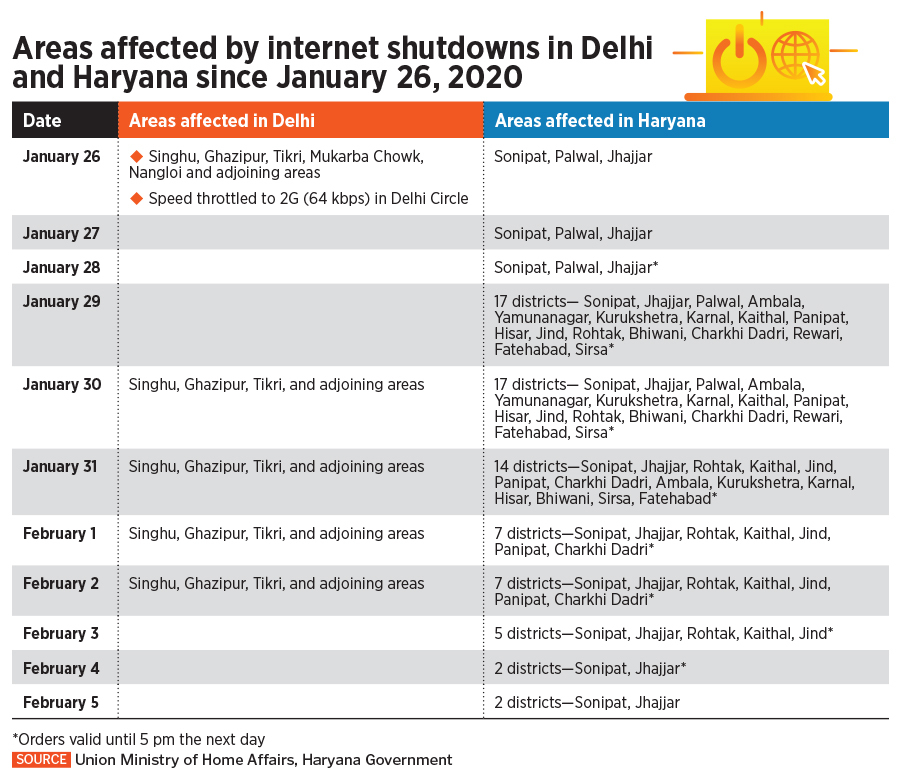 Publications like The Quint are dependent on videos which require a fair amount of internet bandwidth. But with internet shutdowns, even relaying basic information became almost impossible, Nandy says. At The Quint, reporters often send a few lines of new information from the field and the rest of story is then written by colleagues in the newsroom. However, without new updates, even that became impossible. Relaying of video footage is delayed until journalists exit the protest site. Nandy recalls that footage recorded at 2 pm in the afternoon at the Singhu site could only be sent back to the newsroom at 6 pm, when she came out of the protest site. “And then the processing [editing into a package] gets started and ultimately the video could only go out the next day,” she says. The geographical spread of the protest sites means journalists have to at times walk 2-3 kilometres to exit the protest sites and access the internet to relay footage, and then walk back in for fresh footage and reporting. And if the newsrooms need more context, that communication too gets delayed. The Tikri protest site, for instance, stretches to almost 15-16 kilometres, says Dahiya. While the Singhu protest site, says Suresh, “easily spans about 8-10 kilometres”, adding that barricading starts a kilometre to a kilometre-and-a-half before the protests begin. This size also means that if something happens in one area of the protest, and a reporter is five kilometres away but still within the protest site, they do not have any means of knowing what is going on. Newslaundry has a workaround—a person sits in the newsroom, with access to internet, and monitors social media and other news reports. In case something happens, they call Suresh and tell her to proceed to another part of the protest site. But lags, are, of course, unavoidable. “It obviously slows down your work, it slows down information dissemination,” she says. But there are not many options available. “That’s the best we can do to get the news out.” It also becomes difficult for journalists to coordinate with their colleagues within the protest sites. What Dahiya calls “intra-protest communication”, which journalists also rely on to reach incident sites, had been completely decimated. “Crucial information pertaining to a particular point of occurrence gets lost,” a journalist who has been reporting from the three protest sites for a national English daily since November 2020 told Forbes India. Journalists rely on WhatsApp and Telegram groups to share such information. They also rely on live images from reporters on the ground. Incidentally, our WhatsApp call with the print journalist got disrupted since he was approaching one of the border areas. NDTV’s Chandigarh-based Mohammad Ghazali relies on a network of local reporters spread across Punjab and Haryana for ground reports. When Forbes India spoke to him, he was reporting on the Mahapanchayat in Kurukshetra. Local reporters who send him reports from Singhu or Tikri first have to travel into Delhi, either on foot or via car, to get network connection or to scramble for Wi-Fi. Public transportation is not an option because it is not available in a number of areas close to the protest sites. Independent journalists, freelancers bear the brunt of shutdowns Though the shutdowns affect all journalists, independent journalists like Menghani, Singh and Bali who rely on social media to get news out, are particularly affected. Menghani, for instance, regularly uploads videos to Twitter, YouTube, Facebook and Instagram. Singh and Baali have been regularly tweeting photos from protest sites. Live and verified updates are what bring people to their social media handles. 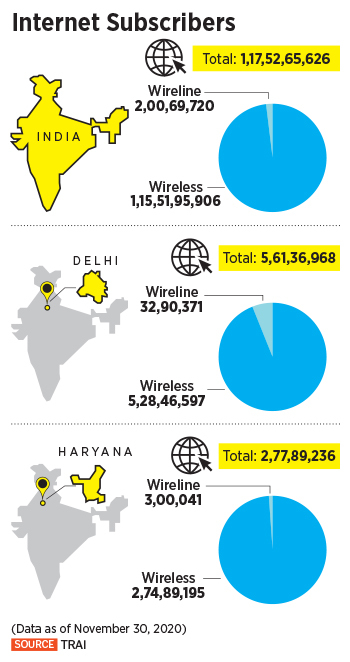