In a scathing report, the IT Parliamentary Committee says the delay reflects badly on the country's planning and execution. So far, certain bands within 5G spectrum have not even been identified, and no spectrum allocation has taken place 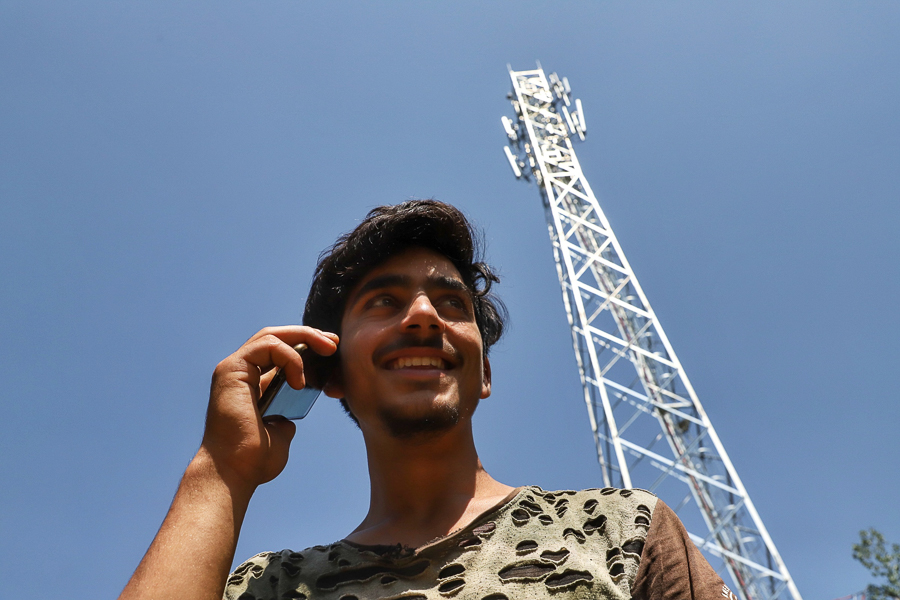 India is not prepared to roll out 5G due to multiple issues, the Shashi Tharoor-led Parliamentary Committee concluded in its report presented before Parliament on Monday. By the end of 2021 or early 2022, 5G will be rolled out for some specific use cases, but “4G should continue in India for at least another five to six years”, the Department of Telecommunications (DoT) informed the committee, drawing its ire. Comparing it to the delayed deployment of 2G, 3G and 4G, the report said this delay “reflects very poorly on our planning and execution”. “India has to do a lot of catching up so far as 5G deployment is concerned,” industry body Cellular Operators Association of India (COAI) informed the committee. “Now, when many countries are swiftly mobbing towards 5G technology, Indiais likely to witness its deployment only by the end of 2021 or early part of 2022, that too partially.” A total of 118 operators in 59 countries have deployed their 5G network. The committee wants DoT to apprise it of the reasons for delay and explain why India is still playing catch-up in 5G deployment. The government needs to take “time-bound action” on the pending recommendations by the Telecom Regulatory Authority of India (Trai). The committee has also recommended that the DoT review all its policies related to 5G and fast track action in areas which need concerted action. It has also asked the DoT to learn the process of rolling out 5G from other countries. However, there are apprehensions that India is set to miss the ̳5G bus “due to lack of preparedness, spectrum issues, inadequate use-case development, uncertainty around sale of radio waves for 5G, etc”. Minimal on-ground actions Although the policy requirements for 5G were finalised in the 5G High Level Forum Report released by DoT in August 2018, “minimal on-ground actions/implementation instructions have been issued so far”. Spectrum bands have not been identified or made available to TSPs Decisions have not yet been made on identifying the spectrum bands and spectrum policy. While globally 118 operators have deployed 5G network in 59 countries in three bands—lower band (700 MHz), mid band (3300-3600 MHz) and mmWave band (26 GHz Band and 28 GHz Band)—the process has not been finalised in India. The lower band was put to auction in India in 2016 but remains unsold. Trai has recommended the mid band, but it has not been auctioned yet, and the mmWave band has not yet been declared in India, the telecom authority told the committee. Trai had made recommendations about auctioning the spectrum in 700 MHz, 800 MHz, 900 MHz, 1800 MHz, 2100 MHz, 2300 MHz, 2500 MHz, 3300-3400 MHz, and 3400-3600 MHz bands in August 2018. Despite that, the DoT has still not auctioned off the spectrum. Opening up the mmWave band is still under deliberations. DoT said it is currently preparing a cabinet note for auctions in 700 MHz, 800 MHz, 900 MHz, and 1,800 MHz. Thus, only the mid band is available for 5G deployment, but it will be auctioned only in the next six months or so. “The committee fail to understand as to how the TSPs (technology service providers) are going to move towards 5G technology without spectrum, the lifeline for 5G, being allocated,” the report said. The committee called it an “unconscionably long delay” by the DoT. Shortage of spectrum for commercial services 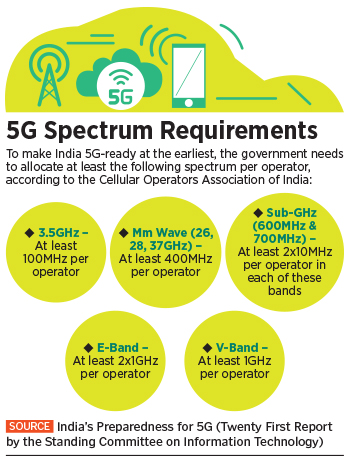 The DoT informed the committee that in mid band (3300-3600 MHz), about 25 MHz is used by the Indian Space Research Organisation (Isro) and the ministry of defence has asked DoT to allocate 3,300-3,400 MHz to them. This means that only 175 MHz is available for vendors which “may not be sufficient” for them to offer their services. The discussions between the DoT, department of space and defence ministry on the issue are still on.   Spectrum Prices Are Too High The COAI submitted that the Trai-recommended reserve price of ₹492 crore/MHz for mid band is higher than the auctioner spectrum price in other countries. TSPs have to purchase in blocks of 20 MHz (₹9,840 crore) and at least 100 MHz (₹39,360 crore) to be operational. Airtel also submitted that the Trai-recommended price is 3-70 times the market-determined price in other countries in absolute terms and 16 times the price in relative terms. Airtel also said that with the minimum requirement of 100 MHz, ₹50,000 crore is “too costly a proposition for the TSPs” and paired with the low ARPU (average revenue per user), it will stifle the telecom sector. However, Trai submitted that if a comparison is made in terms of population and geographical size, India’s spectrum price is one of the lowest.

The DoT, however, told the committee that in line with the recommendations of the inter-ministerial Group on “Stressed Assets in Telecom Sector”, the TSPs have been given a one-time opportunity to opt for 16 instalments instead of 10 for spectrum auction deferred payment, and have been given an option to defer payment of the spectrum auction instalments due for 2020-21 and 2021-22, either for one or both years. All operational TSPs have “generally opted for moratorium of two years”. The committee also asked if the AGR issues would have an impact on the TSPs’ ability to bid for 5G. The COAI said in addition to AGR issues, there is a need to rationalise other levies and duties on the telecom sector to ease its financial stress. The committee recommended the matter should be looked into. Considering conflicting accounts from Trai/DoT and TSPs/COAI, the committee recommended that the issue of high spectrum prices must be looked into and that DoT/TRAI should come up with “a convincing spectrum pricing policy that is sustainable, affordable and acceptable to all”. ‘Why hasn’t the allocated spectrum been audited?’ In 2015, Trai had recommended that all allocated spectrum—to both commercial operators and PSUs/government—must be urgently audited but the government’s decision is still awaited on the recommendation. Calling the lack of action by DoT on this “deplorable”, the committee has said that audit of the spectrum is essential to ensure that the spectrum is not underutilised. It has recommended that an early decision on spectrum audit should be taken on a priority basis. Streamline issues related to licensing, allocating spectrum to attract manufacturers The committee took the suggestion of Telecom Equipment Manufacturers Association (Tema) on board and recommended that Trai should conduct a public consultation on spectrum needs and issues for captive users. Furthermore, another group should be formed to formulate a policy for spectrum allocation for 4.0 industrial uses. Tema Chairperson NK Goyal clarified to Forbes India that this group should be within the DoT or a cross-sectoral body such as Niti Aayog. India will learn from use case trials within the country: DoT to Committee Following IIT-Kanpur Director Professor Abhay Karandikar’s written submission about close to 100 commercial launches of 5G technology in the world that cover seven percent of the world population, the committee asked the DoT whether “any effort has been made by the department to study the experience gained by them”. The DoT replied that in India, it has planned specific use case trials through licensed TSPs. It has shortlisted 100 use cases for further development. Thirty of these will be demonstrated along with TSPs “to learn 5G use cases and rollout challenges”. DoT informed the committee that India has not “signed any agreements specifically for cooperation in 5G technology with other countries”. However, cooperation in 5G technology is one of the areas of cooperation in India’s memoranda of understanding (MoUs) on communications signed with Cambodia, Myanmar, South Korea and Vietnam. How will 5G roll out in India? DoT Secretary Anshu Prakash had informed the committee that 5G will be rolled out “by the end of 2021”. The launch of 5G services will depend on the availability of network equipment and device ecosystem, as per the DoT. “The 5G technology will initially ride on the 4G technology,” Prakash told the committee. In the first few years, the core will be 4G while the radio access network will be 5G. 5G will not be rolled out pan-India, but in select areas “where the demand would justify the capex”, Prakash said. While the earliest applications will be in large metros on the bases of eMBB which will give users better speeds and reliability, he said that a user will not be able to distinguish between 4G and 5G speeds. The difference will be felt in other use cases, he said. The next step will be to auction the mid band (3300-3600 MHz) “in the next six months or so” to make spectrum available. Uses of 5G Karandikar submitted to the committee that there are three key use cases of 5G—enhanced Mobile Broadband (eMBB), Ultra-high Reliable Low Latency (URLLC) and Massive Machine Type Communications (mMTC). eMBB refers to mobile broadband with very high throughput of up to 20 Gbps. URLLC means that networks can be optimised to process large amounts of data with minimal delay, that is, latency, thus being useful for factory automation, autonomous driving, smart grid, robotic surgeries, etc. mMTC refers to connections between large number of devices which intermittently transmit small amounts of traffic. 5G will thus be useful in Internet of Things (IoT) application. ‘Deadline for End-to-End 5G Test Bed project must not be extended’ The Centre’s Building an End-to-End 5G Test Bed project, under which ₹224.01 crore were awarded to IIT-Madras, IIT-Hyderabad, IIT-Delhi, IIT-Kanpur, Centre of Excellence in Wireless Technology, Society for Applied Microwave Electronics Engineering and Research and the Indian Institute of Science, Bangalore, is expected to be ready by October 2021. The aim of the Test Bed is to develop a 5G test bed through which academia and industry can collaborate to understand how 5G technologies work along with their security aspects. The Test Bed will be realised in stages over four versions—version 0 (V0) to version 3 (V3). The first two stages are complete and the next version, V2, is being designed and is expected to be completed by March 2021. The Covid-19 pandemic and the subsequent lockdown have adversely affected the hardware development and testing but software development is on track. The committee wants DoT to ensure that the deadline for operationalisation of the Test Bed is not extended. ‘Where are specific use cases for India to enable deployment?’

Tweets by @forbesindia
Nitin Jayakrishnan: Solving the logistics puzzle for big enterprises
Explainer: Decoding the Tesla-bitcoin saga, and India's tryst with the cryptocurrency