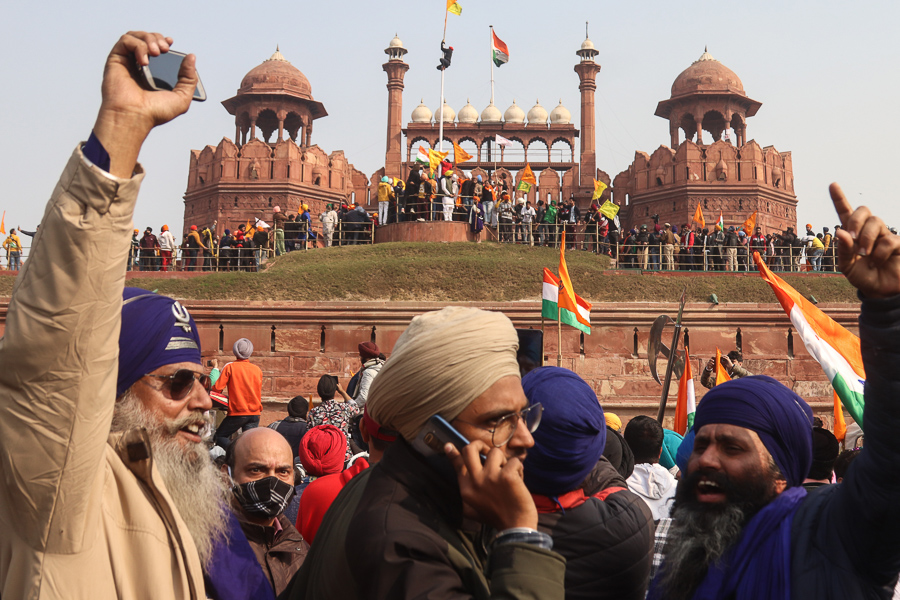 Authorities shut down the internet areas in Central Delhi as thousands of farmers protesting against new agricultural laws stormed the Red Fort on India's Republic Day​.  Photo by Naveen Sharma/SOPA Images/LightRocket via Getty Images Internet services were shut down in areas of Delhi on the afternoon of January 26 until midnight “in the interest of maintaining public safety and averting public emergency”. All 3G and 4G services were also suspended and mobile services were throttled to 2G speeds (up to 64 kbps) in the national capital. The orders were uploaded to the website of the Union Home Ministry after noon on January 27.  Similarly, all mobile internet and SMS services (except banking and mobile recharge), and dongle services have been suspended in Sonipat, Palwal and Jhajjar districts of Haryana until 5 pm on January 27 to “stop the spread of disinformation and rumours” through social media platforms and SMS.  In Delhi, internet services were suspended in Singhu, Ghazipur, Tikri, Mukarba Chowk, Nangloi, and their adjoining areas. All are neighbourhoods close to the Delhi border and violence broke out in some of the areas during the farmers’ tractor rally on Republic Day. In Mukarba Chowk, for instance, the Delhi Police fired tear gas shells at the farmers, according to a PTI report. Farmers broke through police barricades to enter Delhi via Tikri and Singhu, the Deccan Herald reported.  Multiple people in Delhi told Forbes India that they continued to receive messages from their telecom service providers even early on January 27, informing them about the ongoing internet shutdown. 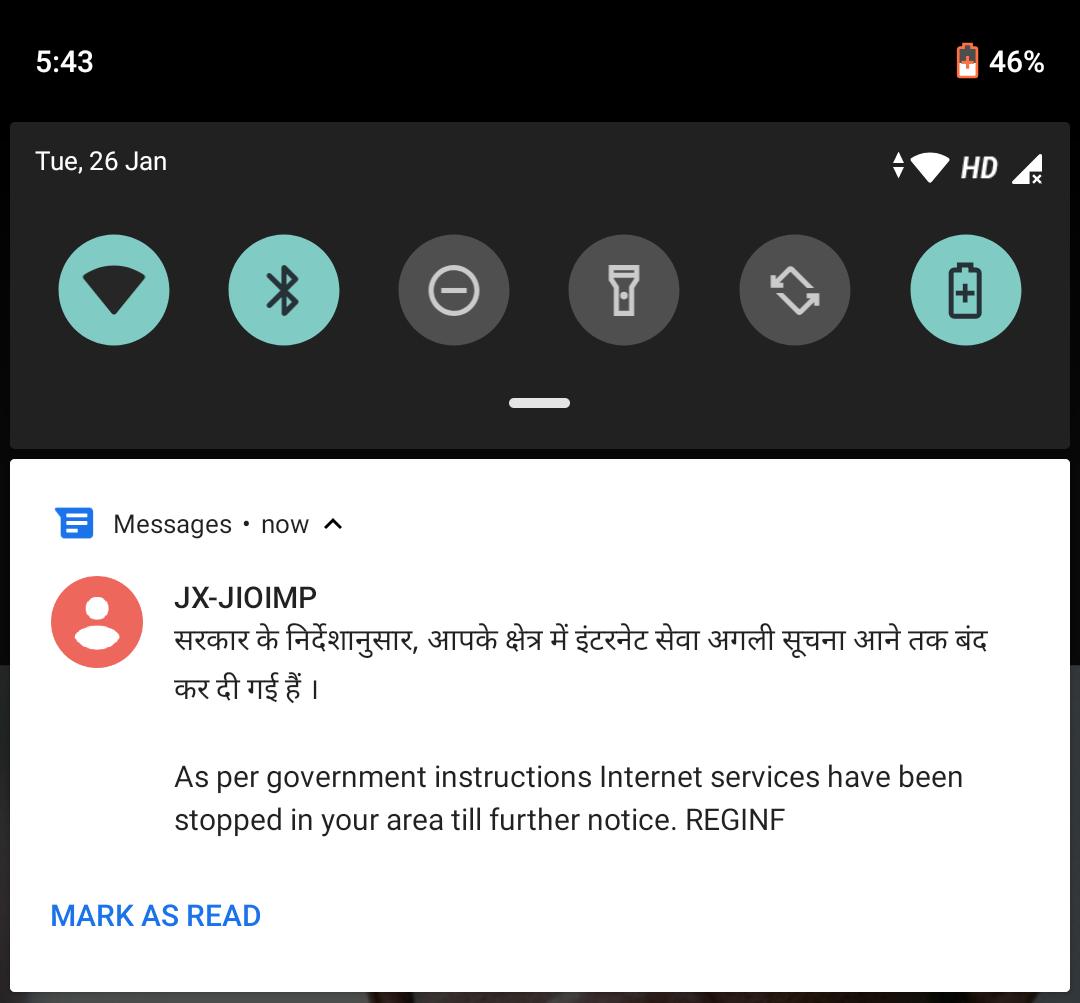 (Top-Bottom): Messages from received by Jio Subscribers on January 26 and January 27, respectively. Internet shutdowns are par for course for the Indian government This is not the first time that internet has been shut down in either Delhi or Haryana. The central government had snapped internet services in Delhi on December 19, 2019, to curb protests against the controversial Citizenship (Amendment) Act. At the time, Airtel and Vodafone had both confirmed that voice and SMS services, too, had been suspended along with mobile internet services in Delhi-NCR, according to MediaNama. According to SFLC.in’s internet shutdowns tracker, internet services have been suspended in Haryana at least 13 times since 2016.  According to the same tracker, India witnessed 83 shutdowns in 2020, the highest anywhere in the world. That is to say nothing of the continued suspension of internet services in Jammu and Kashmir since August 4, 2019, a day before Article 370 was abrogated. 4G services continue to be restricted only to two districts—Ganderbal (Kashmir) and Udhampur (Jammu) and these were also restored only in August 2020. In all other districts, mobile internet speeds remain throttled to 2G. Thus, of the 1.25 crore people in Jammu and Kashmir, only 8.5 lakh have access to 4G internet.  There are additional caveats to access internet: Postpaid subscribers will have access as per their district, but prepaid subscribers will have access only if they are verified as per post-paid norms, which include a police verification. There are no speed-related restrictions on fixed-line internet connectivity which is available with Mac-binding. [Mac-binding means that a device’s MAC (Media Access Control) address (a hardware identification number) and its IP address are bound together so that all requests from that IP address can be served only by the computer with the particular MAC address.] The latest order, dated January 22, 2021, from the Jammu and Kashmir Home Department, extended these restrictions until February 6, 2021.  Are internet shutdowns legal?  Both Republic Day orders were passed under the Rule 2 of the Temporary Suspension of Telecom Services (Public Emergency or Public Safety) Rules, 2017, which empowers the Union home secretary and state home secretaries to direct telecom operators to suspend telecom services. The order for Delhi was approved by Union Home Secretary Ajay Kumar Bhalla but was signed by Shailendra Vikram Singh, deputy secretary (cyber and information security) in the MHA. The order for Haryana was signed by Rajeev Arora, the additional chief secretary (home) for the state. Sources at two national telecom operators confirmed to Forbes India that they got these orders. 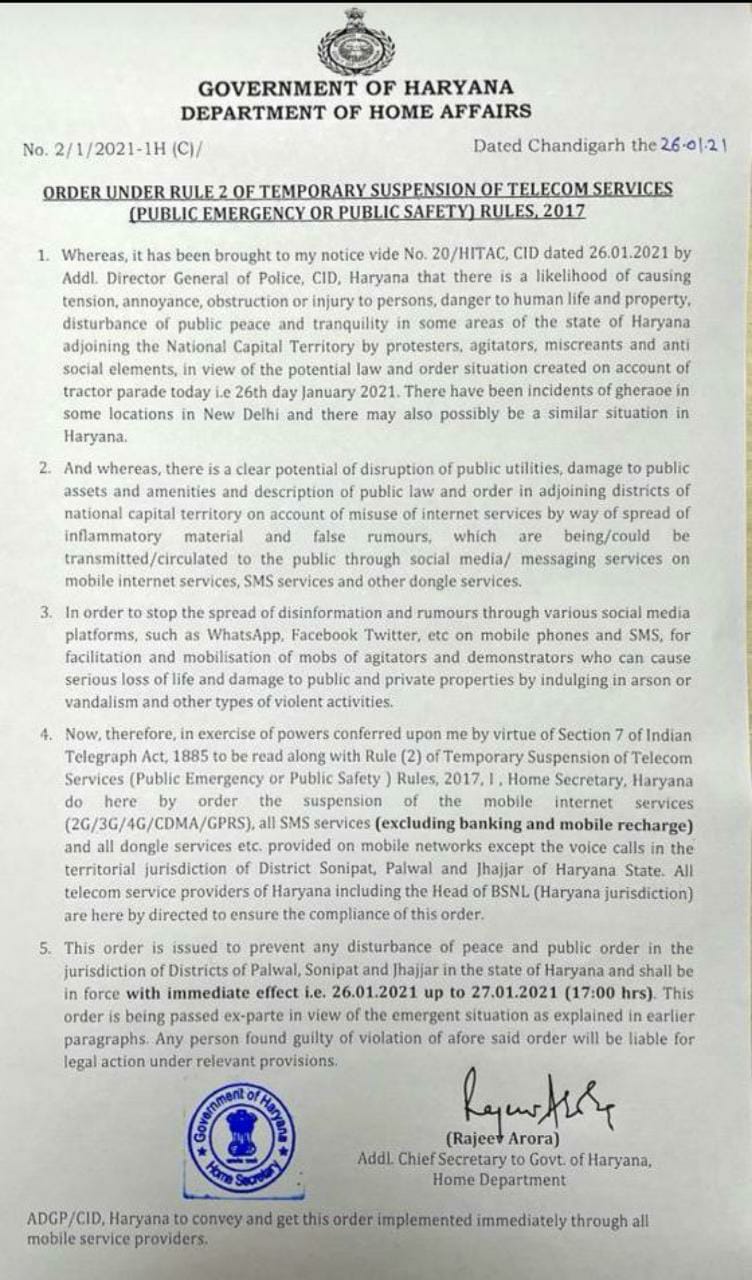 However, additional requirements were laid down by the Supreme Court in its January 2020 judgement in the Anuradha Bhasin v Union of India case. Bhasin, the editor of Kashmir Times, had approached the apex court to argue that reduced mobile internet speeds were hampering people’s rights to health, education, business and free speech. She also raised questions about the legality of internet shutdowns in Jammu and Kashmir as no Review Committee, as directed by the Telecom Services Suspension Rules, had been set up to review the order.  Orders must be made public: “The order has to be made available online or has to be made proactively public. It should also be made available online on government websites,” Vrinda Bhandari, a Supreme Court advocate who, long with Delhi-based digital rights organisation Internet Freedom Foundation (IFF), represented the Foundation for Media Professionals in the Anuradha Bhasin case, told Forbes India. The idea, she explained, is to make this knowledge public for citizens. While the order for Delhi was made available on the MHA website after noon on January 27 (here), the order for Haryana was not available on the Haryana government, the home department, or the DoT websites. Forbes India has reached out to Bhalla, Singh and Arora for comment.  According to the Rules, the order has to be sent to a Review Committee the next day, which then will have to review it within five days. “The Review Committee sends back recommendations. It does not send back a binding legal opinion and it does not have the power of setting aside the internet suspension,” says Apar Gupta, executive director at the IFF. Bhandari clarified that even if the shutdown order is lifted within one day, it must still be reviewed by the Review Committee within five days. “I believe that the spirit of the Anuradha Bhasin judgement also means that the Review Committee orders have to be published online, so the general public is aware of the reasons given by the Review Committee are available in the public domain and can be assailed before court,” she said.   Internet shutdowns must be a proportionate and necessary response: “The Anuradha Bhasin judgement recognised that any suspension [of telecom and internet services] needs to adhere to the principle of proportionality and must not extend beyond a necessary duration by itself,” Gupta said. To that end, orders must have a “higher degree of detail” to assess whether or not they are proportionate, he said. “While the orders by themselves are non-speaking orders, [that is], they only talk about restrictions but do not detail reasoning to a very high extent within them. It would, in practice, be in conflict with the Anuradha Bhasin judgment,” he explained, referring to the MHA order for Delhi.  Bhandari also said telecom services, including internet shutdowns, can be imposed only in extreme circumstances, that is, in cases of a public crisis or a public emergency, which have very high thresholds. “I don’t think we were in a public crisis or a public emergency,” she said.  Throttling internet speeds is tantamount to an internet shutdown: “The speed of the internet has a high degree of impact as to the availability of dynamic web services,” Gupta explained.
To put the 64 kbps speed limit into perspective, Prateek Waghre, a research analyst at the Takshashila Institution who submitted a technical affidavit to the Supreme Court comparing the impact of 2G and 4G on web performance, told Forbes India that he also assumed 2G speed to be 168 kbps as per Telecom Regulatory Authority of India (TRAI) documentation. “Yesterday, people in Delhi were not even able to perform speed tests using their mobile data services,” he explained. When Waghre ran a simulation to download a vaccine fact sheet from the Ministry of Health and Family Welfare Website, it took him 2-3 seconds on Ookla reported 4G speed for Delhi (13.04 Mbps) and 5 minutes on 64 kbps. Interested readers can watch the simulation here. The Delhi-based author of this article also faced problems making WhatsApp audio calls, whose minimum requirement is 64 kbps. Waghre, who has also been tracking all the orders used to extend internet shutdowns in Jammu and Kashmir, said this was the first time in his experience that a maximum speed limit had been prescribed in the order.  Larger review of rules around internet shutdowns is still awaited Gupta said the larger system of the reform of internet shutdown rules, required by the Anuradha Bhasin judgement, still remains outstanding. “The review process, which needed to be there within the rules through a process of amendment and wider consultation, have also not been put in place,” he said.  Don’t know if internet shutdowns are effective: Govt had told Parliamentary Committee in 2020 In October 2020, the Parliamentary Standing Committee on Information Technology had summoned representatives from the Union Home Ministry, and Delhi and Bihar state governments to ask if they knew internet shutdowns were effective. All the representatives were clueless, and did not know what metrics were used to determine their effectiveness. While the Home Ministry and the two state governments maintained that internet shutdowns were essential to stop violence during riots and to maintain law and order—claims that have been repeated in the Republic Day shutdown orders as well—they could not establish a causality between internet shutdowns and curbing riots.  The Shashi Tharoor-led committee had also questioned the Department of Telecommunications over the impact of the protracted internet shutdown in Jammu and Kashmir in August 2020. That discussion had turned into a partisan debate over whether throttling internet speeds was a proportionate response.
Internet shutdowns have become so common in India that “suspension of telecom services/internet and its impact” is an agenda topic for the committee for 2020-21.

Tweets by @forbesindia
This on demand workforce platform is making the industry rethink their work models
Can the Budget help India's aviation sector?