Reeling under losses due to the Covid-19 impact, the industry hopes for some financial help, and a reduction in levies and taxes, apart from removing the cap on fares 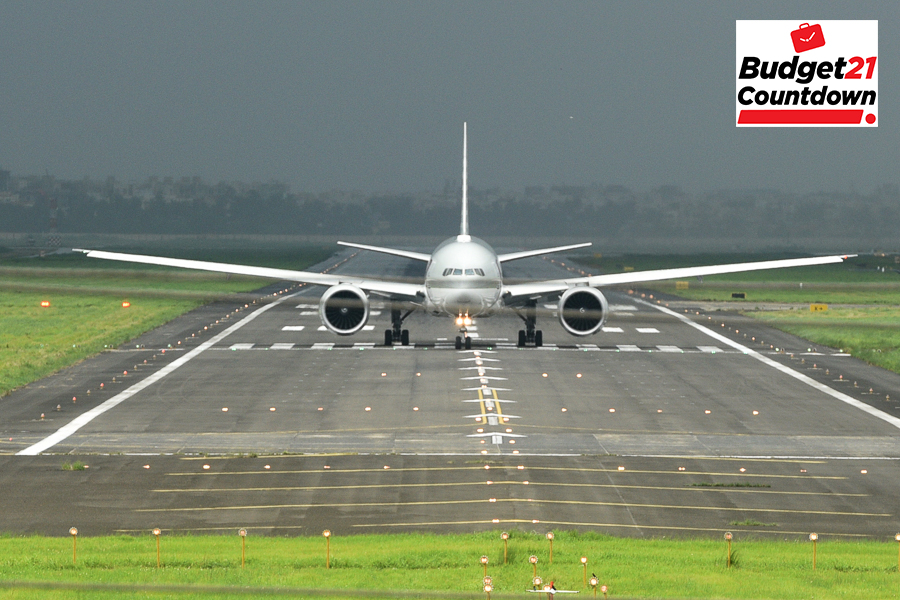 It has been a tough year for India’s aviation sector.  Hit hard by the Covid-19 turbulence, it quickly went into a tailspin early in March 2020, with the sector seeing zero passenger movement for almost two months. Since then, the government has gradually raised the scheduled flight capacity, even as India remains the second-worst-hit Covid-19 country in the world. As of January, the government has allowed 80 percent of the capacity to be used by airlines, after starting out with 33 percent capacity at the end of May 2020 when it lifted restrictions following a lockdown.  While companies did pivot, and move towards movement of cargo to stay afloat during the period, the year had been largely lacklustre for the sector. This year, Indian airlines are expected to post a net loss of Rs 21,000 crore following travel restrictions amid the Covid-19 crisis, according to ratings agency ICRA, and will also require additional funding of Rs 37,000 crore from FY21 to FY23 to recover from the losses and debt.    IndiGo, the country’s largest airline by market share, had reported revenues of Rs 2,740.96 crore in the quarter between July and September in comparison to Rs 8,105 crore, a nearly 70 percent fall in revenues. SpiceJet, the country’s second largest airline, meanwhile, reported revenues of Rs 1,054 crore, as against Rs 2,845 crore in the same period.  “The debt levels will remain high for the industry and are estimated to be range-bound at around Rs 50,000 crore (excluding lease liabilities) in FY21 and FY22, with the industry requiring an additional funding of Rs 35,000-Rs 37,000 crore over FY21 to FY23,” Kinjal Shah, vice president, ICRA Limited, said in a statement.   With capacities returning to normal, the government is now expected to end caps on fares that were extended until March this year. Alongside, the sector is also expected to see significant shifts, particularly with ownership changes. Jet Airways has found new owners, while the Tata Group is expected to take over AirAsia’s business, and is also a frontrunner for taking over Air India. “The Indian airline market has always had huge potential for airlines due to its size, but profitability has remained elusive,” airline consultancy company CAPA said in a statement in January. “On the domestic front, strong competition and excess capacity growth have hindered financial returns, and on the international side, overseas airlines have been more successful than local airlines in tapping into this market.”   That apart, CAPA also reckons that the country's airlines could likely see further consolidation, leading to two players dominating the sector, while the acquisition of Mumbai airport and Navi Mumbai airport by Adani Airports could also result in a similar situation.   For now, the industry could certainly be looking forward to some financial help, a demand that had been put forward as early as May last year, and reduction in levies and taxes in the immediate future to help improve operations. That means, among others, the lowering of taxes on ATF (aviation turbine fuel) and reducing other levies like airport charges, parking and landing and navigation charges. ATF accounts for about 40 percent of the costs.  “Since airlines have to currently follow a fare band as per the directives of the ministry of civil aviation, which is constraining their ability to charge higher fares, these entities want relaxations in terms of the fares they can charge,” ICRA said in a statement. “Budget 2021 is expected to reiterate focus on improving regional connectivity through RCS or UDAN. The Budget is also likely to focus on setting up new airports and expanding the existing airport capacities at some key airports to help address the current airport infrastructure constraints faced by the airlines and to improve connectivity with the underserved/unserved airports to boost tourism.”   Last year, in a major relief for the aviation sector, the GST Council had decided to reduce the rate on Maintenance, Repair and Overhaul (MRO) services of aircraft from 18 percent to 5 percent with full ITC (input tax credit) and change the place of supply for B2B MRO services to the location of recipient. “The problem was partly with taxation, but the government has helped rectify a lot of it,” Ajay Singh, chairman of SpiceJet, had told Forbes India earlier. “We have been telling them this is a labour-intensive business. India should be the MRO capital of the world, but Indian carriers are sending their aircraft to different parts of the world.”