Mobile internet services suspended in most of Haryana until January 30 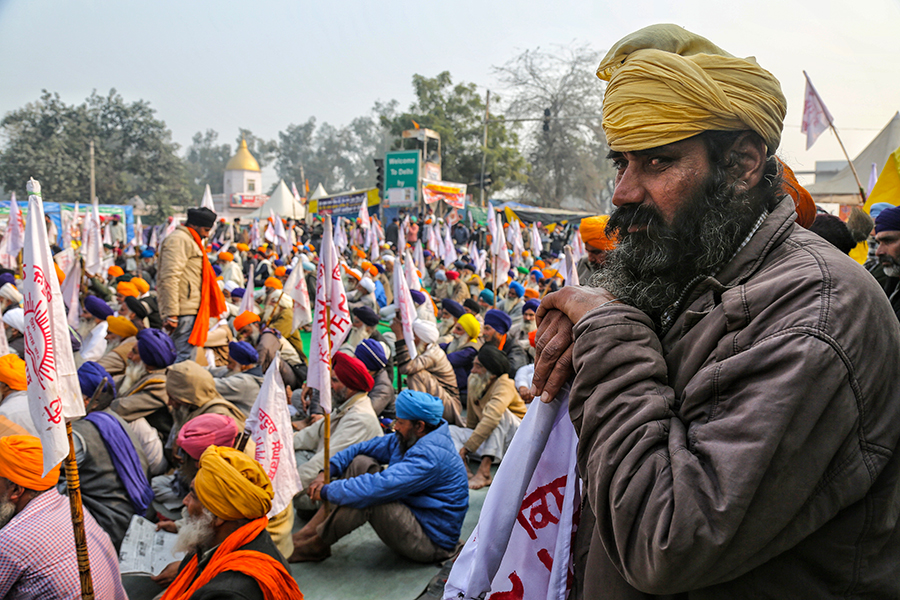 Demonstrators with flags at Singhu Border on January 28, 2021 in New Delhi, India. (Photo by Sanchit Khanna/Hindustan Times via Getty Images)

The Haryana government has ordered telecom operators to shut down all mobile internet services, all SMS services, and all dongle services in 17 of the 22 districts of the state until 5 pm on January 30, 2020. The aim of the shutdown is to prevent protestors from mobilising through social media and to stem the flow of disinformation, in the wake of fresh tension at farmer camps between unidentified miscreants, farmers and later the police. Two national telecom operators confirmed to Forbes India that they are in the process of implementing the order. The office of Rajeev Arora, the Additional Chief Secretary in the Home Department of Haryana, who signed the order, confirmed the authenticity of the following order to Forbes India. 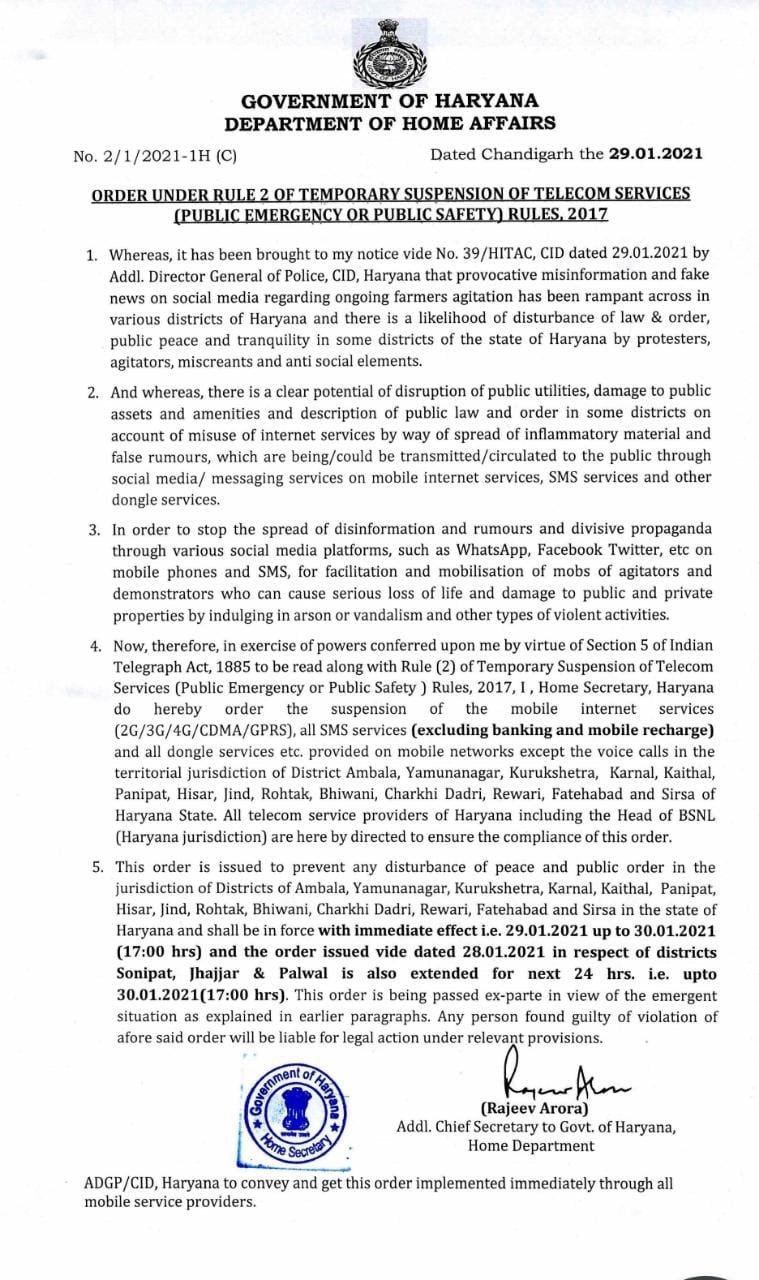 Three of the districts—Jhajjar, Sonipat and Palwal—have not had mobile internet services since January 26. The remaining five districts (out of 22) where mobile internet services are still available are Gurugram, Faridabad, Nuh, Mahendragarh and Panchkula. Forbes India was able to confirm with residents of Gurugram, Faridabad and Panchkula that their mobile internet services are still functional. According to the standards laid down in the Anuradha Bhasin judgement, internet shutdown orders have to be made public. At the time of publication, the order had not been uploaded on the website of Haryana Government’s Directorate of Information, Public Relations and Languages, or on its main website. However, the Directorate’s official Twitter handle had tweeted out a list of districts where mobile internet has been shut down, but it didn’t contain the official order.  A tweet is not the same as publishing an order, Vrinda Bhandari, a Supreme Court advocate who, along with Delhi-based digital rights organisation Internet Freedom Foundation (IFF), represented the Foundation for Media Professionals in the Anuradha Bhasin case, said. “They [the authorities] have to state the reasons for the internet shutdown, including the time and date until when the internet is shut down. There has to be an order that can be challenged. A simple tweet mentioning the districts where Internet has been shut down does not satisfy the standard under the TSP [telecom service provider] rules,” she said. The second rule of the Temporary Suspension of Telecom Services (Public Emergency or Public Safety) Rules, 2017, empowers the union home secretary and state home secretaries to direct telecom operators to suspend telecom services.

“It is not enough for the order to circulate on WhatsApp or on social media. There is so much disinformation on social media to begin with, so how do we verify its authenticity? It defeats the purpose of stemming misinformation,” Bhandari explained.  Farmers have been protesting against three controversial farms acts since they were passed in September 2020. On Republic Day, farmers headed to the national capital in an announced and planned tractors’ rally. However, the rally turned violent, resulting in the death of at least one farmer. Mobile internet services were suspended in five areas of New Delhi while all 3G and 4G services were throttled to 2G speeds (up to 64 kbps).  Will internet shutdowns help stem the flow of disinformation?The stated aim of curbing misinformation is interesting because most journalists who report from the field today rely on mobile internet to parlay information to studios, or to upload it to their websites. In case of digital publications, journalists often rely on social media to report live from the ground. Due to the internet shutdowns, such reportage has already been affected. “The biggest irony is that this [information about the internet shutdown] has been made available online and the people who are most affected by it cannot access it because their internet has been shut down. Ideally, it should be posted outside the offices of district magistrates, at chowks, etc.,” Bhandari pointed out. Correction: The article originally stated internet services have been suspended in 18 districts. They have been suspended in 17. The error is regretted.