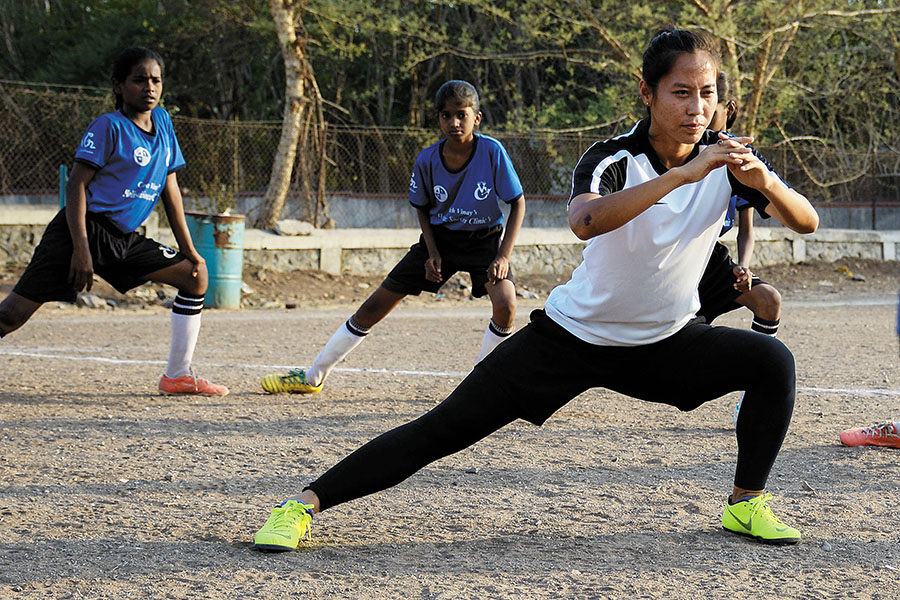 Ngangom Bala Devi, the flag bearer of women’s football in the country, has netted 52 goals from 58 appearances for India since 2010

If necessary, sleep with a football. It’s a line by her father that Ngangom Bala Devi has still not forgotten from her days of growing up in the Northeastern state of Manipur where she would be casually playing the game with boys in the fields in her spare time. It not only underlines the passion one must have to play sport, but also speaks of the dedication required to reach the highest level. The 30-year-old’s father, Ngangom Manohar Singh, an ex-state-level football player, is a proud man today. It’s been a year since his daughter became the first woman and Asia’s only footballer to be signed by Rangers FC—one of the top football clubs in the Scottish League. A dream jointly seen by her father and her came true.  “It is a very big thing personally, and for the country, that I am able to play for such a big club. A lot of players representing it are national players of their teams in Northern Ireland, Canada, France… that helps me learn from them,” says Bala Devi, who became the first Indian woman to score a goal in a European League clash. In December 2020, Rangers FC decimated Motherwell FC with a 9-0 win, with Bala Devi scoring at the 85th minute.  So far, she has played six games for the club (apart from six friendly ones) and aspires to be a part of many more. Her contract is scheduled to end in June 2021, but she is hopeful that Rangers will renew it. “I am keen to play for a few more years. In fact, as long as I can play… and learn in an international environment and bring those learnings to India,” she tells Forbes India on a Zoom call from her apartment in Glasgow.   Just a couple of months after reaching the United Kingdom (UK), the coronavirus-induced lockdowns came into effect, leaving Bala Devi confined to her room. She was itching to get back on the field and kept herself in top shape even in those trying times. “I was hopeful that I would play a lot, but the coronavirus brought things to a standstill. But I kept myself fit by working out in my room,” she says. “The fitness levels and intensity of the games here are extremely high. For instance, one can learn the technique to quickly run and return to their position… these are smaller tweaks, but Indian players can benefit a lot.”

While watching a game, she was also overwhelmed to witness the abiding love spectators have for sportspersons there. “The fans stood cheering for 45 minutes, and motivated and supported their team,” she says.  During the 2020-21 season, the Rangers Women’s Football Club is at pole position in the League, having earned 18 points from seven matches. It has lost only one game. Jersey No. 10 Bala Devi, who plays at position nine or ten in a forward formation, plays a key role in setting up a goal for her team.  The Indian national team forward has netted 52 goals from 58 appearances for the country since 2010. Last year was a complete whitewash in terms of national sporting action, but Bala Devi is eager to don the India colours again.  Her short stint with FC Rangers has not only expanded her worldview but also made her aware of the varied struggles a sportsperson may have to encounter. For instance, the UK has stringent rules regarding work permits for footballers, and the qualification criteria include the home country’s FIFA standing.  In 2019, Bengaluru FC—backed by the JSW Group—had partnered with Rangers FC on a non-commercial partnership. Through this, both clubs would help each other develop talent, from soccer schools to youth soccer and women’s football. Although Bangalore FC does not have a women’s team, it coordinated with Rangers FC for Bala Devi’s trial after being impressed with her game. One of the problems in acquiring a work permit is that the UK only offers it to players who have played a certain percentage of games and whose country ranking is below 50. India ranks 53 among 159 countries with 1,432 points.  The Rangers, however, made a case for Bala Devi. Vociferous support from the All India Football Federation, the women’s team and ace Indian footballers such as Baichung Bhutia and Sunil Chhetri compelled the panel to eventually issue her the permit. An employee and a player with the Manipal Police Sports Club, she was recently promoted as ‘officer’ after her achievements with Rangers.  Indian women’s football still does not get the kind of recognition and attention the men’s game does. But Bala Devi is hopeful that associations and sports officials would create competitive leagues for them too, and find more avenues for the newer generation to play in international leagues as well as bring glory to the country. She certainly has come a long way from dribbling while playing with her brother and father in her village. Today, Bala Devi is a global success story and a role model for young girls in India who dream of playing the beautiful game. And she gives the entire credit to her father for that. “He used to play football, and he taught me how to shoot, turn and other nuances of the game,” she says.

Tweets by @forbesindia
Getting news in the times of internet shutdown
Investing in G-Secs: A structural reform, great opportunity... but wait