Paytm, kicking off $3 billion Indian IPO in July, does not rule out potential US listing later

Billionaire Vijay Shekhar Sharma, who always wanted to get to breakeven before taking his company public, is now looking at a timeline where the IPO happens first. The listing could see Chinese investor Alibaba Group dilute its stake or even exit India's most valuable startup 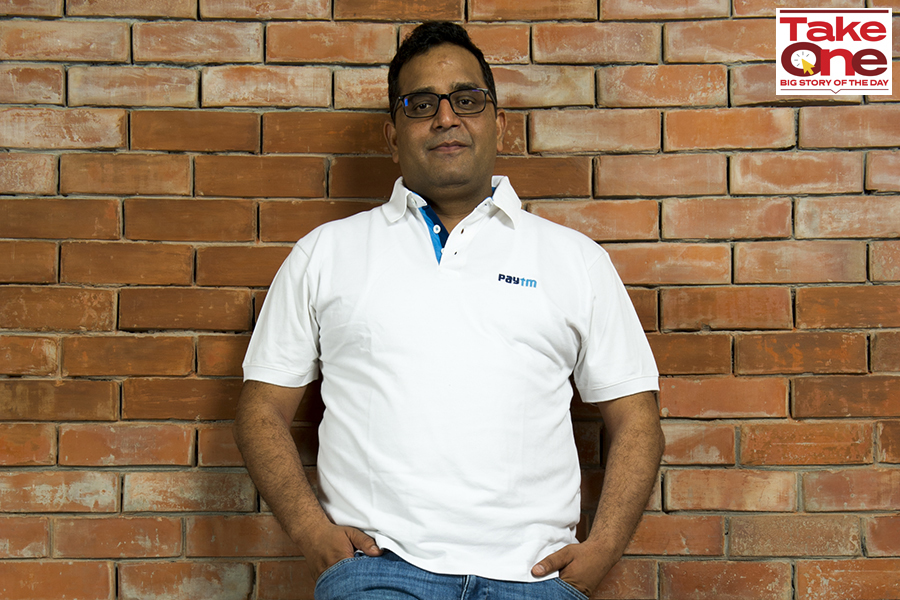 Paytm founder Vijay Shekhar Sharma had always wanted to get to breakeven before taking his company public.
Image: Amit Verma

One97 Communications Limited, popularly known as Paytm, India’s leading digital payments facilitator and the country’s most valuable startup, will become a public company as early as Diwali, if all goes to plan.
The company’s 42-year old founder, billionaire Vijay Shekhar Sharma, who always wanted to get to breakeven before taking his company public, is now looking at a slightly accelerated timeline that will mean the IPO milestone will be crossed first. As recently as five weeks ago in April, Sharma had reiterated his desire to get to breakeven before an IPO, in an interview with Forbes India.

That’s changed a bit. All the members of the company’s board, including people like Sharma’s mentor and early investor Ravi Adusumalli of Elevation Capital, met in an online meeting on May 28 and approved the share sale, people familiar with the development tell Forbes India.
The company is looking to raise about $3 billion, at a valuation of between $25 billion and $30 billion. It will file the IPO prospectus with India’s markets regulator, Securities Exchange Board (SEBI), to kick off the listing process in July. News of the IPO timeline and the financial details was first reported by Bloomberg last week, citing a person familiar with Paytm’s plans.
“I’ve talked about an IPO at a time when we have made it to breakeven,” Sharma told Forbes India last month. “It will be a great opportunity for Paytm to look at the stock market or the responsibility of predicting quarterly revenues or quarterly costs.”
“By 2021 end, we should be reaching near breakeven, and Covid is just accelerating the path towards that, incidentally, because we are becoming leaner, thinner and meaner in terms of costs, in terms of attention to revenue,” he added.
Paytm plans to list on India’s National Stock Exchange and Bombay Stock Exchange, even though it might be loss-making at the time, according to a person familiar with the plan. As per SEBI's Issue of Capital and Disclosure Requirements (ICDR) regulations only profit-making companies can list on NSE and BSE.
However, if a loss-making startup like Paytm is to go for a listing, says Ankur Bansal, co-founder and director at BlackSoil, "they must float 75 percent of their net public offer to only qualified institutional buyers, including insurers and mutual fund companies, and alternative investment funds. Only 25 percent of the offer can be subscribed by retail investors, including high-net worth individuals."
While Paytm is still widely expected to report a loss for the 12 months that ended March 31, 2021, or FY21, Sharma expects the combination of revenue growth and reduction in cash burn to get to a point by the end of the year from where breakeven will be in sight in FY22.
“Cash burn has reduced sharply in FY21, and they have seen strong growth in payments volume,” a person with knowledge of Paytm’s operations tells Forbes India. “And Paytm continues to invest in its financial services businesses.”
On a standalone basis, One97 Communications’s operational revenue for the year ended March 31, 2020 rose to Rs3,115 crore from Rs3,050 crore for the previous year, according to data from business intelligence provider Tofler. Losses came down to Rs2,833 crore from Rs3,954 crore. At Paytm, revenue was Rs3,629 crore and losses were at Rs4,217 crore for FY20. The losses were lower by 40 percent compared to FY19, the company said in a blog post in September 2020. 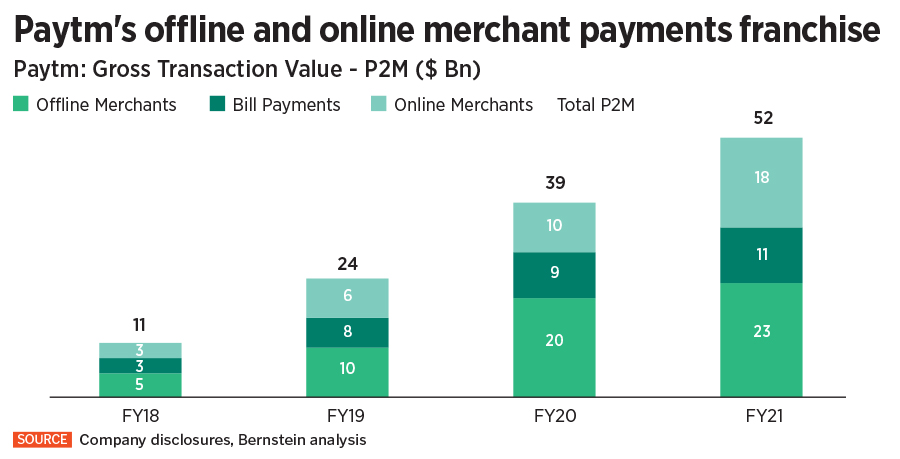 Paytm recorded over 1.4 billion monthly transactions in March — more than any other competitor — led by strong growth in offline payments and financial services, the company said in a blog post on May 13. With over 20 million merchant partners on board, it currently maintain the highest market share in offline payments and continues to register 15 percent month-on-month growth, it said.
“With the advent of UPI (unified payments interface), there has been a rising narrative that questioned Paytm’s market leadership. However, under the hood, Paytm leads on merchant payments and has built an ecosystem of synergistic fintech verticals around its ‘super app,’” analysts at investment firm Bernstein wrote in a pre-IPO research report on May 27.
Paytm’s strong merchant focus, merchant and inventory integrations with the wallet, merchant point of sale, online payments and consumer cross-sell has led to a strong revenue base for Paytm versus its UPI-focused competitors, according to the analysts. “Paytm earns 10-15x more revenue per active user relative to its UPI-focused competitor payment apps,” they wrote. 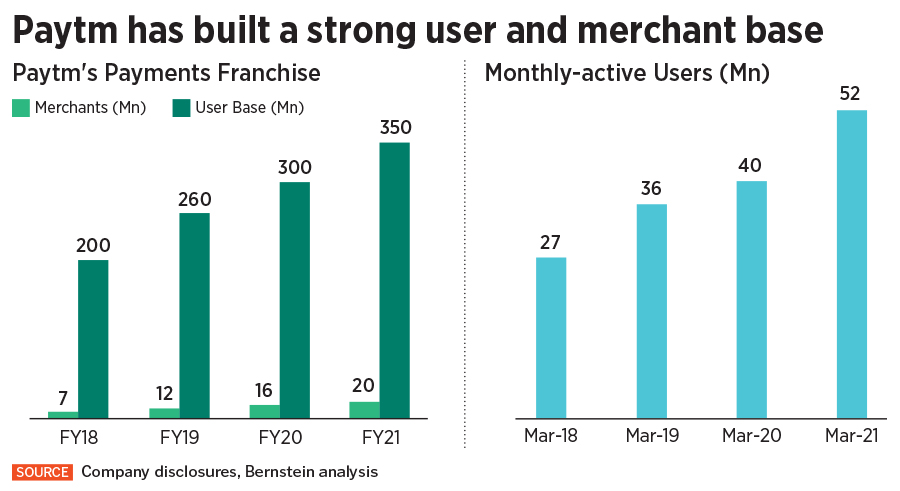 Overall, Paytm has more than 300 million users of its mobile wallet, and 60 million customers at its payments bank, Paytm Payments Bank, which is already profitable.
Its huge transacting consumer base, which still has room to expand, gives Paytm the heft to make a bold gambit with its IPO, an investment banker who didn’t want to be named, tells Forbes India. Features like ‘Buy now, Pay Later’ are seeing massive growth on Paytm’s platform, he points out. The strong core payments platform, combined with these growing financial services, including insurance and wealth management, can only bolster the company’s revenue growth, the banker says.
On the other hand, the current revenue-versus-losses picture leads one to ask if Paytm can ever monetise its consumer base to the level it needs to. And Paytm may also have lost some initiative in trying to build multiple businesses by itself, instead of acquiring them, according to the banker.
“It is a historic event for the Indian tech startup ecosystem in India, not just from an exit perspective, but creating a new way of thinking where companies that are yet to reach profitability can also list at fabulous valuations,” Manish Singhal, founding partner at pi Ventures, a deep-tech VC firm in Bengaluru, tells Forbes India. “Growth stocks the world over are highly sought after, and Paytm will need to figure out a way to consistently grow their top-line while controlling the losses going forward,” he says.
Especially over the last two years, Sharma has worked to pare costs and boost revenues, focusing on further building out his core payments business and adding financial services around it. He has invested over Rs20,000 crore in Paytm since 2010, when he founded it, offering people a chance to ‘pay through mobile,’ hence Paytm, and top up their phone plans and pay utility bills. He then offered a mobile wallet and expanded the number of things that people could pay for using their phones — from movie tickets to ecommerce shopping to neighbourhood groceries purchases.
Backed by venture capital funding, Sharma is today at the head of a company that has some 14 fully or partly owned subsidiaries, a joint venture, and multiple associates companies. Paytm’s operations include an ecommerce marketplace, insurance, lending, stock broking, a payments bank, online gaming and events and entertainment.
Paytm’s investors include China’s Alibaba Group and its affiliate ANT Group, Japan’s SoftBank Group and America’s Berkshire Hathaway. The last significant funding round, announced in November 2019, saw Paytm being valued at $16 billion. Overall, Paytm has raised about $3.5 billion in funding. The listing could see Alibaba diluting its stake or even exiting Paytm, the investment banker mentioned earlier tells Forbes India.
“On the flip side, seeking $30 billion in valuation in the Indian market is like asking for the moon,” the banker says. Had the listing been in the US, investors would have shown appetite for such huge valuation. Global investors take a bet on tech and future play, which is very strong in the case of Paytm. But in India, investors are governed by the simple thumb rule of kitna deti hai [what does it yield?], he says.
Sharma himself seems to be open to various options, although the initial share sale is certainly going to be in India. “The market is filled up with new kind of methods also.
There is IPO 2.0 called SPAC,” Sharma mused in his interview with Forbes India in April, but then went on to discard it as an option: “If you noticed, SPAC was booming in January-February, by March it was slowing down and by April it was considered not the (best) method.”
He pointed out that the government of India has publicly announced that it could allow the listing of Indian entities outside India. “So by the time we are ready, the options could be a little more on the table than just one IPO method which was always there in India,” Sharma said.
A US listing is attractive not just to raise money or reward investors who have been patient with the startup, but also as a way to build a global brand. And Sharma has never concealed his global ambitions, although he is clear that with the money he has, there is still much work to be done in India first. That said, Paytm has a successful partnership in Japan, for example.
If one looks at Infosys, TCS, HDFC, ICICI they all were listed in India, and some issued American Depository Receipts (ADRs), Sharma pointed out, adding “Any one listing does not stop another listing if regulations allow it.”
(With additional inputs from Salil Panchal and Naini Thaker​)