An unexpected and extraordinary development at Kilpest left investors grappling with a question: How does one value an extraordinary surge in profits? 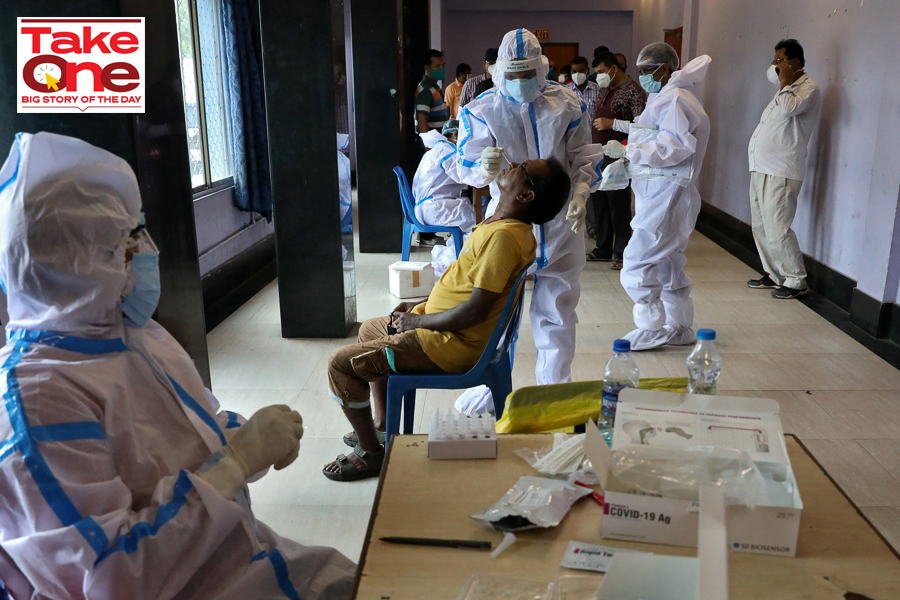 A healthcare worker wearing personal protective equipment (PPE) takes a swab sample from a man for a rapid antigen test at a check-up centre, amidst the spread of the coronavirus disease (COVID-19), in Kolkata, India, July 30, 2020.
Photos by Rupak De Chowdhuri / Reuters

As the Covid-19 lockdowns began, and investors rushed for exits, Kilpest India’s stock held steady. It saw little erosion in value during March, and through April and May there were more buyers than sellers on most days.

The company had stumbled upon a rare opportunity and had moved quickly to make the most of it: Its RT-PCR kits, which test for the Covid-19 virus, were in high demand, and Kilpest was the only listed player that could capitalise on the opportunity. A business that had never made more than Rs 10 crore in annual profit over the last decade was now on track to end the year with Rs 100 crore in profit. (It has delivered Rs 76 crore in the first two quarters of this fiscal.) As investors rushed in, its market cap soared fivefold to Rs 550 crore in August.

But this sudden, unexpected and extraordinary development left investors grappling with a question that has come up several times over the past decade: How does one value an extraordinary surge in profits?

Past examples—there are several, such as SAIL, Rain Industries, Graphite India, HEG, Vikas WSP—have shown that in the short term, markets almost always err in according too high a multiple to the cash that has come into a business. They start pricing in the good times continuing for longer than they do. As profits rise investors rush in, only to be disappointed as the management misallocates capital and the profits eventually prove unsustainable.

“If you are a conservative investor, it makes sense to be wary,” says Sanjay Bakshi, professor at Management Development Institute, Gurugram. Bakshi, who has studied this phenomenon, points to the fact that according too high a multiple to what could essentially be a one-time infusion of cash is wrong. For instance, if a business were to receive money on account of the sale of land, the market would rarely accord that cash a high multiple.

In contrast, a sudden spurt in profitability on account of a shortage of a product receives a comparatively higher multiple. Both cases should ideally be treated similarly. Shortages always correct with more supply coming in, and prices fall, resulting in profits normalising.

The most important rule is to look for the sustainability of profits. Is it one-time or is the business cyclical? Has the profit potential of the company fundamentally changed? Answering these questions is important, as a simple discounted cash flow valuation would otherwise accord too high a multiple.

In Kilpest’s case, the company received a shot in the arm on account of the molecular diagnostics kits they made for testing the SARS Cov2 virus. These kits were in short supply in April and the company was one of the few to receive government approval. It had sales of Rs 6 crore in the quarter ended June 2019; this rose to Rs 53 crore in the same quarter of 2020, while the bottom line moved from Rs 1 crore to Rs 24 crore. In the quarters ended September 2019 and 2020 revenue numbers were Rs 10 crore and Rs 52 crore respectively, and the bottom line was Rs 2 crore and Rs 52 crore respectively.

To understand how the company could do in future, one has to go by the track record of the management. Have they been efficient capital allocators in the past?

“In most companies, the success goes to their managers’ head and they can’t stop from expanding as they don’t want to lose market share at any cost,” says Bakshi. He would rather that the cash be used as an opportunistic weapon when a downturn comes; that is when the cash would have a lot more value than its book value. If there is no past record available on how the management has deployed past profits, err on the side of caution. Also, paying off debt is more important than expanding. Paying out dividend or rewarding shareholders should happen only after that.

Corporate India has companies—such as Asian Paints and Pidilite—that have been efficient allocators of their profits. There are also those—such as Piramal Enterprises—that have squandered away their gains. Or, like Shree Cement and Ramco Cement, have had the patience to wait, sit on the cash, and only invest when the market is in their favour. Understanding which bucket a business falls into is of paramount importance while deciding whether it deserves a multiple. A common mistake investors make is taking comfort from a low price-to-earning (PE) multiple. “The PE multiple here is the biggest deception, as the E is not sustainable,” says Bakshi. It is best to use an average of past PE ratings and asset values as a sanity check on valuations. Kilpest is currently at 2.5 times FY21 earnings. 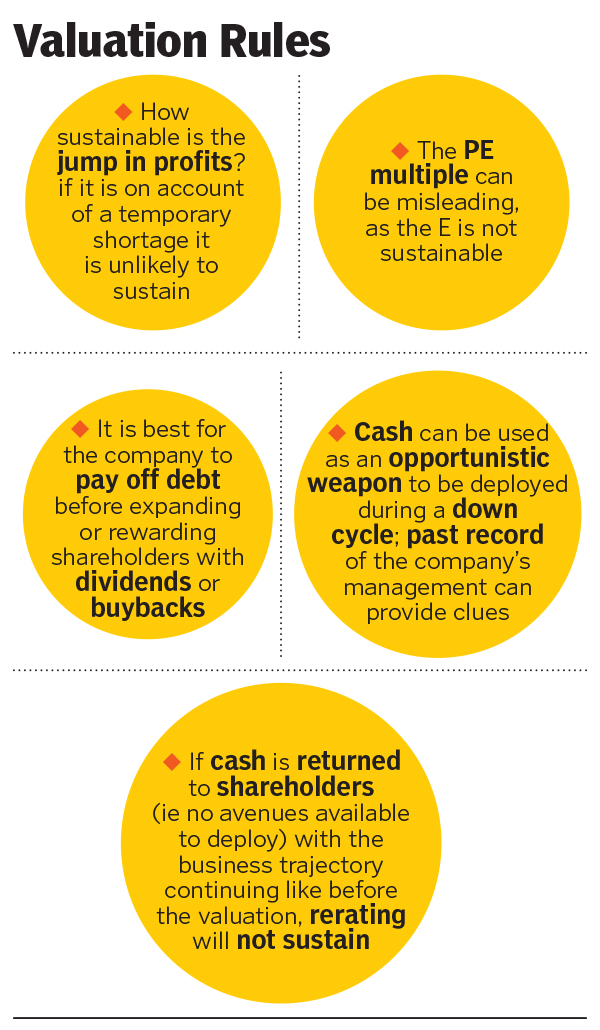 Almost always in cases that have seen a sudden one-time surge in profitability, the managements have not been able to effectively deploy the capital. In the case of HEG and Graphite India, the managements didn’t even pay down debt fully. Instead, they chose to reward shareholders with hefty dividends. SAIL expanded capacity at the top of the steel cycle. As a result, valuations went back to levels that they were at before this one-time event. A good rule to remember is that it is best to exit these businesses at a low PE multiple.

The number of molecular diagnostic laboratories in India surged after April, when the demand for Covid-19 testing surged; from about 100 laboratories, the number went to 1,000. Dhirendra Dubey, executive director at Kilpest, says, “Molecular diagnostics laboratories went up from about 100 to 1,000-plus on account of Covid-19, and are expected to go down to about 300, as the remaining labs will have less viable business and there will be an increase in competition from newer manufacturers.”

In the meantime the amount the company can charge for tests has declined. In November, it was able to charge only Rs 148 per test kit, down from Rs 230 in October. This shows that with the shortage alleviating, prices are declining rapidly and profits should normalise over the course of 2021.

Having established that profits are likely to decline, it becomes imperative to answer what the company plans to do with the cash. Kilpest has indicated that it is on the prowl for acquisitions, but also that target companies have become expensive. For now it has a conservative approach to deploying the cash. “We will try and keep the cash for two years, as we look for organic and inorganic opportunities. Post that we could consider a buyback,” says Dubey.

Being conservative has meant that investors are willing to give the company time to deploy the cash on its books. If Kilpest is able to use this to grow the business to a new trajectory, expect the rerating to take place. The company believes it should have an answer in two years. Alternatively, if the money is given back to shareholders, they’ll happily take the money and invest it in a company that is more efficient at allocating its profits.