For milliner Ryan Wilde, the best days for custom fedoras, pork pies and panamas are still ahead 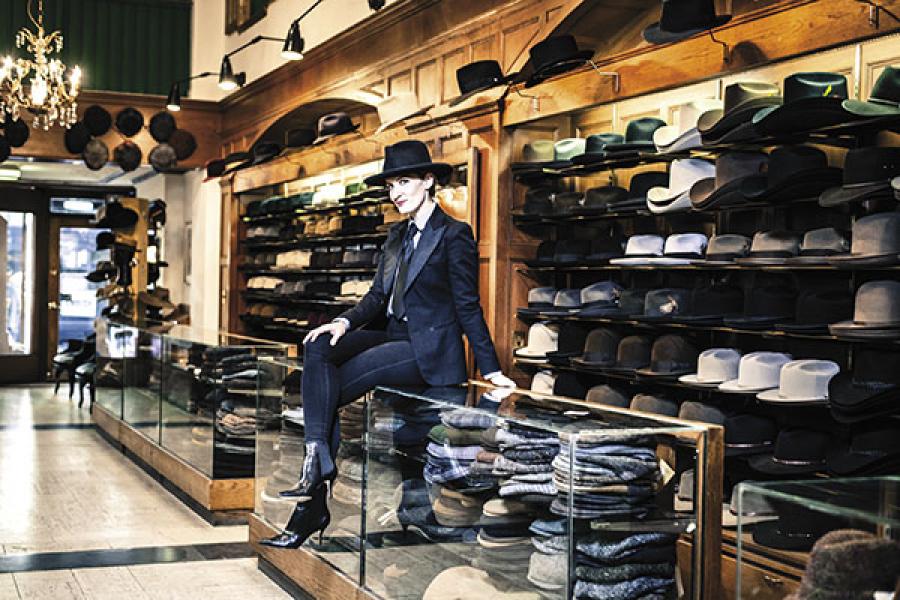 This is such a dead art that all of the people who know how to do it are actually dead,” jokes Ryan Wilde, the director of millinery at New York’s historic JJ Hat Center, as she adjusts a bright orange fedora. “There’s no one to ask.”

But as the 34-year-old Wilde explains it, that’s half the fun of her work. Her decade-long career has been filled with experimentation and boundary pushing. “I love when a client walks in here and they’re like, ‘What can we do?’ ” she says. “I like making it happen. I like challenging myself. I like being afraid to make something.”

While  she has always been influenced by extravagant style—her father,  a professor of painting at Syracuse University in Florence (Italy),  dressed his daughter in elaborate costumes for portraits—Wilde’s wasn’t exactly a direct route to becoming one of the country’s premier hatmakers. In fact, until a career-ending injury at age 15, she studied at the School of American Ballet, on the fast track to joining the New York City Ballet.

Instead, she studied photography at Syracuse, first at the Florence campus and then in London, where a chance encounter with fashion editor Isabella Blow—muse to designers Philip Treacy and Alexander McQueen—led her to discover a passion for hatmaking. When Blow gave her the names of women across the city from whom she could learn the basics of the craft, Wilde was hooked: The combination of art, sculpture and function, mixed with just the right amount of impracticality, was the perfect fit for the young artist.

“I really like getting dirty—I like gardening, all that stuff,” she says. “So when I first started taking millinery  classes, it just felt so right. It was fashion, it was art, and it was hard labour—it spoke to me instantly.”

After stints making hats for Henri Bendel and Patricia Field, Wilde opened her own custom shop in Brooklyn in 2009. At the JJ Hat Center, she designs seasonal collections and creates custom hats for men and women—including LL Cool J, Donald Trump and Lady Gaga—though she considers herself primarily a men’s designer. “Men can really flourish in here; they feel pampered in a way that men don’t usually get to feel,” she says. “They are given all of these choices, and I’ve seen men shop here in a way they can’t shop anywhere else.”

Head games: “People come in here with a persona that they want to convey,” Wilde says of her custom hats, which take two or three weeks to produce

While a typical custom creation takes between two and three weeks to make, Wilde can spend months poring over designs with a client, perfecting every detail—from the size of the brim to the colour of the trim—on a single piece. Each hat is crafted from the finest fur felts available, which Wilde moulds, sculpts, stiffens and sands herself. If the perfect shape isn’t found in one of the hundreds of wood blocks lining the walls of her work space, Wilde will construct one.

And while famous customers add glamour to her profession, it’s her everyday clients that truly inspire her. Some have been coming to the midtown shop for years and have happily embraced Wilde’s custom services. Others wander in looking for something they won’t find anywhere else.

“People come in with a persona that they want to convey. I kind of like the cowgirl, rancher girl, because that’s kind of who I am. I work hard, work with my hands—I’m not the kind of girl you need to take to a fancy dinner,” she says. “But sometimes my other persona is I like to go to the opera and I like to wear cocktail hats. I like people to know that I like chic styles, extravagant, theatrical styles. You can be different people in a hat. I think people like that.”

Tweets by @forbesindia
Cairn-Vedanta merger makes sense, but not a done deal yet
Beautiful accessories worth splurging on