Instead of fixing individual morality, we should fix the system using laws that are simple and direct; it is best when business is fixed by simple laws where everybody knows what can be done and what cannot 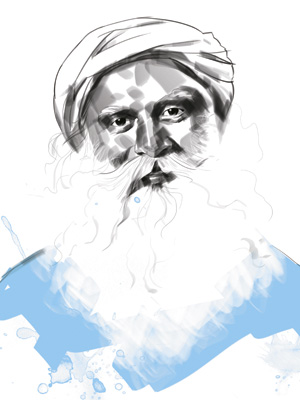 Sadhguru Jaggi Vasudev
The Man: The founder of Isha Foundation loves his motorbikes, is as comfortable in jeans as in yogic garbs, and competes with businessmen on the golf course. His methods for self transformation are drawn from tradition. A regular speaker at the annual World Economic Forum at Davos. He says that businesses need to be governed by a simple set of rules where everyone knows what can be done and what cannot.

The Oeuvre: Has written and spoken extensively on spirituality and society; often weighs in on contemporary issues on television debates.

X-Factor: Charismatic; his mix of spirituality, science and common sense have found many takers in India.

The Message: A moral code doesn’t work for society and individuals. Ethics and morals only work in areas where there are no laws.

The Hypothesis
Whether you’re manufacturing a safety pin or a computer or a car or a pump, it doesn’t make sense to leave out fifty percent of the world. If you have any business sense, you would include the whole world. When this fifty percent eats well, your market base improves.

So what?
Existing laws were created by people who sought to keep a hold on the population. What we need now are laws that are simple and direct with very little room for grey areas that limit our dependency on individual values and ethics. The laws and values in place now constrain people and constraints never work. Instead, what is needed are laws that liberate people from pettiness.

I know I am expected to offer a moral code in this article—one that you will anyway not follow. So, I’m not willing to preach another dharma for businessmen. Morals can always be subverted.

They may make you feel good, but everyone always ends up doing what they have to do.

Ethics and morals have great relevance only in those areas of life where there are no laws. There are many areas where laws are irrelevant—within a family, with friends, in certain trustful atmospheres. But when it comes to business, it is very important that as a nation and as a society, we set up laws which leave very little room for ambiguity.

Right now, we have laws which are so ambiguous that even experts in the field do not understand them. These laws were fixed by people who conquered this land, who wanted to keep a hold on the population, to curb anyone who is successful. The laws here are such that just about anybody can be picked up for something he doesn’t even know he’s done. Tomorrow, if I pick you up and put you in the lockup, I can always show you a reason why you could be arrested!

It is time we made the laws very simple and direct and reduced the grey areas, to limit our dependency on individual values and ethics. But instead of fixing the system, we try to fix individual morality and hope for results. This is never going to work.

You can never impose one standard morality on the whole population, because ideas of good and bad are always changing. Osama Bin Laden had his own fantastic logic about why he had to do what he had to do. Veerappan had his own logic. Ask a Maoist, who is right now blasting away a police van, and he has his own perfect logic.

So it is best that business is fixed by simple laws where everybody knows what can be done and what cannot. These laws can also be fixed in such a way that everything that you earn in some way benefits everybody.

Right now, nobody wants to pay their taxes because the tax goes into the pockets of a few. So it is important that the laws are not just fixed, but enforced. Now you may ask, don’t we need morality to enforce a law?

No, you don’t. All you need is humanity. That’s why it’s important for people in responsible positions—in society, politics or business—to have at least a drop of the spiritual process within them. Why? Because spirituality stirs up your humanity and when your humanity comes to the fore, you are naturally inclusive and you do what is best for everyone. It is a far better insurance than stirring your morality.

But instead of allowing humanity to overflow, you try to constrain it with ethics. Constraints never work. Curbing people is never the answer; liberating them is the only way. You have to liberate people from their petty needs rather than try to control them and make them feel guilty.

What Karl Marx offered was a fantastic dream in which everybody lives by his need, not by his greed. But this was a utopian ideal. Marx had a brilliant vision for humanity, but grossly underestimated the human need to be committed to limited boundaries. Our existing society is a consequence of existing human nature. Without working to transform human nature, you cannot transform society. Communism is wonderful if it comes voluntarily, but when it is enforced, it is the ugliest way to live.

Mark Twain, who was excited (like so many American thinkers and authors) by the Communist experiment, travelled to Russia. One day, he was walking on a country road when he saw a country gentleman walking with two hens under his arms.
Twain caught up with him and said, ‘Comrade, is it true that if you had two mansions, you’d give away one to a comrade who doesn’t have one?’

‘Is it true that if you had two carriages, you’d give one away to a comrade who needs it?’

‘You have two hens; will you give away one?’

So you’re only willing to share that which you don’t have. I would say, instead of being stingy with your greed, why not make your greed limitless? Right now, your greed is limited: You say, ‘I want to live well’ or ‘I want my family, my community, my nation to live well’. Why not expand it to ‘Everybody should live well’?

When you are feeling wonderful, it is a natural desire to want everyone and everything to feel wonderful. If one touches a dimension which is beyond physicality, the need to draw boundaries will disappear. That is when you can call yourself human.

The reptilian brain always thinks of a boundary because of a very deep identification with the body. But there is a dimension beyond the physical within you. Its nature is to expand limitlessly.

This desire for expansion finds expression in the world as desire or greed. But you can make this greed unlimited—a desire not for ‘more’, but for ‘all’.

If you are feeling absolutely joyful, you are naturally generous, naturally fair, naturally giving. So all business leaders need to do is work at becoming joyful by their own nature, not because of today’s stock market’s upward surge. If you are joyful by your own nature, you are not mortgaging your joy to something outside you. You’re no longer in pursuit of happiness; instead, your life has become an expression of your joy. Once you are blissful by your own nature, nobody has to tell you ‘Be good’ because when you are feeling blissful you are wonderful to everyone anyway.

Businessmen have the tag of being vested interests. Part of this tag is earned, and the rest is just bad press. The fundamental purpose of business is expansion. You can expand in two different ways: By conquest or by embrace.

Every leader needs to acquaint himself with the spiritual process because every thought, every emotion, every action that he generates is impacting millions of people. It is utterly irresponsible to handle people’s lives without first handling yourself and fixing yourself. If your work is important, who you are needs to be worked at.

Today, when the economic engine is driving the very fundamentals of our world, it is vital that the leaders who handle the economic process are spiritually inclined.

For one, the spiritual process makes the individual more efficient, more capable, more balanced, and in turn, more productive. At the same time, when the leadership is spiritually evolved, it will lead to a less misaligned social and global situation. If the economic leaders made the economic process more inclusive, gentle and compassionate, if they saw the connectivity between all lives on the planet, it would give rise to a far more just social order.

I am not advocating charity; I am telling you to run a more inclusive business, because whether you’re manufacturing a safety pin or a computer or a car or a pump, it doesn’t make sense to leave out 50 percent of the world. If you have any business sense, you would include the whole world. When this 50 percent eats well, your market base also improves!

Essentially, your success is just about how well you harness the body, mind and the external situations around you. There is substantial medical evidence to prove that if you remain pleasant within yourself, your ability to conduct your body and your mind is greatly enhanced.

And it is well known that unless people see you as a reliable, trustful human being, you cannot harness the outside situation for too long.

So let’s fix laws which are enforceable. And let your scrupulousness be fixed by your own humanity, not by some moral code which can be subverted. Above all, don’t live like a slave of some moral where you want to do something else but don’t, just because you feel guilty.

If you’re joyful, it doesn’t mean you won’t do business; you will, in fact, do it wonderfully well. And then being inclusive will just be a natural way to be.