Sanjeev Aga: How To Grow A Spine - A Guide For Indian Managers 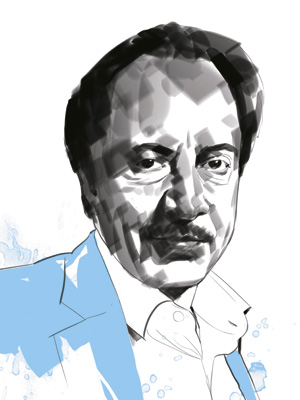 Sanjeev Aga
The Man: Free thinker. Former managing director of Idea Cellular; currently a consultant for corporates and non-profit organisations. Always on the lookout for innovations and solutions. Vocal critic of government policy, particularly telecom. He gives us a roadmap for an ethical revolution in Indian business.

The Oeuvre: Took Idea to the number three position in the telecom space in India. Was unafraid to use Idea ads to address issues of caste, language and other social situations.

X-Factor: Business in India does not mean that you have to bend the rules.

The Message: Peer pressure is a powerful instrument of behavioural change.

The Hypothesis
If business lacks scruples, the Indian business manager laments it is because of our witless regulations, our corrupt system, our promoters, we are but cogs in the wheel. Behind these self-serving alibis, he abdicates responsibility, and indeed abets in sustaining a morally degenerate business order. But this order is on the verge of change.

So What?
The new generation of Indian managers could use a new moral compass that when answered in the affirmative, can lead to positive change. It involves following three principles. One, I do not initiate something I know is wrong. Two, when confronted with wrong-doing, I resist, not roll over. Three, at the end of my tenure, I raise the bar for moral conduct, compared to what I inherit.

I rewrote this piece because what I wrote first did not persuade me, and I could not figure why. Until I first dealt with and then dispelled shibboleths that were clouding my thinking (I could not continue writing).

Shibboleth # 1 – Capitalism inherently conflicts with a moral order
The proposition is that capitalism, being based on ‘creative destruction’ and the ‘fit ousting the unfit’ unleashes animal spirits, which lead to an amoral society. And indeed, raw capitalism without the rule of law, or capitalism without a social underpinning, or capitalism which is cronyism—all conditions which substantively describe the Indian experience—have led to an amoral order. But this is a spurious analysis. There is nothing unique about capitalism which causes such degeneration; there are examples world over of socialism or totalitarianism displaying similar or even greater degeneration. Empirical evidence just does not support the proposition that capitalist societies are more amoral.

Shibboleth # 2 – Profits made honestly are more sustainable
This pious thought disguised as a gospel could not be more wrong. The number of Indian businesses, with operations predominantly in India, that are upright in their behaviour and yet successful, can be counted on the tips of one’s fingers. They are the exceptions; the swallows that do not a summer make. In India, there is overwhelming evidence, staring us in the eye that dishonesty pays in buckets. Leading to the self-evident hypothesis that the primary reason we have dishonest business is because dishonesty pays, and will remain so until such time that honesty pays.

Shibboleth # 3 – Dishonest business is but a reflection of a dishonest citizenry
This is a seemingly direct, but actually a forked derivation, which further has the undesirable effect of resigning us to our misery. There is no basis to assert that Indians individually are characterised by dishonesty. The dynamic of group behaviour is not an algebraic sum of the behavioural dynamic of individuals constituting the group. Within India, there are morally degenerate organisations, but also morally top-notch organisations, and both drawing their human intake from the same talent pool and cross-section of society. If Indian business today is seen as dishonest, it is not because Indians are dishonest, but because the dynamics of business behaviour are programmed to foster dishonesty.

Shibboleth # 4 – Enlightened business leaders will pull us out of this cesspool
While we salute the heroic personalities amongst us, in the main this is driving up a cul-de-sac. Business leaders, as a whole, even those who dislike dishonesty, are products of the status quo, and will not smash the status quo. If you are looking for disruption, look for character and conviction. Do not vacantly gaze up the ladder.
-------------
Having shed shibboleths which were cluttering my mind, I now return to where I began. For most of my business career, I stereotypically expected the state to improve the well-being of citizens, and to provide policy features leading to moral business conduct. I have seen the state up close. And I am underwhelmed! This leads me to the frightening question as to whether this downward spiral in ethical standards will end only with the collapse of our first republic, or whether there is hope of a turn-around. There can be no certain answers to such riddles. Yet, my hunch is that crony capitalism is generating countervailing forces, and these forces will first check and then roll back the tide. It is further my hunch that this countervailing force will emerge, not from the state, nor from the promoter group class, but from an unlikely and hitherto unsung source, the millions of faceless Indian managers. Commentary about Indian capitalism pins culpability for business misconduct entirely, but inaccurately, upon the promoter groups, and so far the Indian manager has conveniently lied low. If business lacks scruples, he laments it is because of our witless regulations, our corrupt system, our promoters, etc. We are but cogs in the wheel. Behind these self-serving alibis, the Indian manager abdicates responsibility, indeed abets in sustaining a morally degenerate business order.

All this is set to change and the charge of the Indian managerial brigade could have historic consequence. Why do I say so? I say so not out of hope, but from pointers gleamed from interactions with hundreds of emerging managers and from unmistakable secular trends. For one, the managerial class today is numerically far larger. With the growth of the manufacturing and services sector, their numbers will continue to outsprint economic growth. Second, businesses are increasingly complex, leading to a dramatic rise in the influence of managers upon the business.

Then, tomorrow’s managers are better educated, more confident and stronger financially than before. It is a post-colonial generation without the servility and insecurity ingrained in earlier generations.

I am now crystal ball gazing into the next decade, and presenting my anticipations as a wish list of tomorrow’s managers.

STOP EXTERNALISING, TAKE CHARGE
Indians have been champion hypocrites. We are intrepid in demanding of others, but squirm to look within. But the worm is turning! As the Indian manager grows a backbone, not all, but much business dishonesty will evaporate. So, take charge. Remember, if you think you are a doormat, you will be walked upon. If you do not think you are a doormat, chances are it will not even occur to people to try walking over you. As simple as that!

SHED SELF-IMPOSED INHIBITIONS
There is scarcely an Indian manager in position of authority who can claim having never participated or winked at a business malpractice. The author is no exception. Let that not faze you. Throwing the book at you is the oldest trick in the world, as illustratively the political class is doing at the Anna folks. If persons were to be so deterred, there would never be change. So while you strive to be the change you desire, so long as your motives are sincere and you know right from wrong, just go for it.

DO NOT PICK ON SOFT TARGETS
It is relatively easy to be honest with personal finances. It is harder, but not too hard, to enforce honesty upon subordinates. The test is whether you offer even the slightest resistance to wrongdoing among persons stronger than you. Regrettably, such resistance has been negligible. In fact, some Indian managers compete to support their superiors in wrongdoing.

Do not proclaim honesty if you are a doormat of your superiors. Personal financial honesty devoid of character is plain lack of integrity.

THE THREE-QUESTION TEST
Not every one can be Arvind Kejriwal. Neither is it necessary. Setting unrealistic standards will not work. I have found the following three-question test useful: a) I do not initiate something I know is wrong, b) Confronted with wrong-doing, I put up some resistance, howsoever little, rather than just rolling over, and c ) At the end of my tenure I raise the bar for moral conduct, compared to what I inherit. These three questions, answered in the affirmative, provide a useful moral compass. And practically every manager can achieve them. Once most managers start setting even modest incremental standards, the cumulative effect will unleash a tsunami.

KNOW THE PRESSURE POINTS
Given a choice, managers should shun working for businesses infamous for dishonesty. Managers in investment companies, in rating companies and in audit firms must raise the red flag when encountering poor governance. Industry associations and whistle-blower mechanisms are other points of piling pressure. We all recognise corporates with managers known for sticky fingers, for cooking books and fudging accounts on behalf of others. These toads strut like peacocks. Defeather them! Let them know the disdain of fellow managers. Peer pressure is a powerful instrument of behavioural change.

The change to be ushered by tomorrow’s managers will not be defined by headline events or by heroic personalities. It will be a silent bloodless coup.