With no regard for ethics, Indians may well succeed, but India will not. Is that what we want? 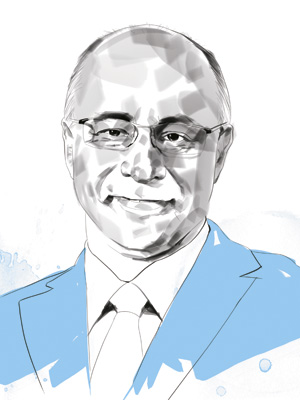 Subroto Bagchi
The Man: Up until March, when he was made the chairman of Mindtree, Subroto Bagchi had one of the coolest job titles in the whole of IT industry—gardener. His role was to nurture the top 100 leaders of Mindtree, a company he co-founded with eight others in 1999. He says the only way you can get obedience and compliance is on a platform of morality.

The Oeuvre: Wrote four books, each one of them spelling out rules for success, drawing on the lessons from the lives of professionals and entrepreneurs. He also writes the hugely popular column Zen Garden for Forbes India.

The Message: We should stop being blasé about integrity in public life.

The Hypothesis
If a society and its government fail, can business succeed? There are no easy answers. After all, in failing societies and poorly governed countries, business does take place. Sometimes it may even flourish.

So What?
The right to govern is a moral right. It cannot be demanded, it is merely given. You cannot govern anyone by force; not even your own child. The only way you can get obedience and compliance is if the child sees you on platform of morality, not a platform of force. Physical power does not resurrect a failed parent. That precept is true of any political system as well. When politicians and bureaucrats choose to abdicate moral ground, business simply loves the concomitant result.

I want to start with a very basic question: If a society and its government fail, can business succeed? There are no easy answers. After all, in failing societies and poorly governed countries, business does take place. Sometimes it may even flourish. In a country like Rwanda, there are people buying and selling items of everyday living as much as medicines and armament. In bombed out Iraq, where the government vanished, there remained a currency and trade; people did business with each other. In Afghanistan, business continues because people must live. Business, by its very nature, seeks out opportunities in everything. The larger question really is whether we want to be in a situation where societal and governmental failure need not worry us business folks because we will be there like roaches after a nuclear holocaust; whether we want to be amoral because the job of business is not to lay down the moral code.

Last year, I spent four weekends with a group of sixteen-year-old school students. I sought them out while writing my latest book, MBA at 16, to get a sense of what they thought of the world of business and what they wanted to know about it. The most important question they had for me was whether business could exist without being corrupt? Later, when I was exchanging notes with the vice chairman of the school, an educator of great vision and capability, I told her about the question and asked her if teachers came across such questions from young people as well. She told me about a very serious debate that was going on among a group of students on morality and a few of them, tenth graders all, asked—what was the big deal in going to jail for a few months for making a few crores? The debate was taking place during the height of the 2G scam. The view that a jail trip was a rite of passage unsettled me hugely and I have not yet come out of my anger and sadness that we, the present lot, have led the most promising generation in Indian history, to come to such reasoning.

Many years back, after coming back from office, I found my two daughters, both school girls then, fighting bitterly. The younger one levelled a complaint of bad behaviour against the older girl as the two came fighting down the staircase. I was standing at the bottom. As I intervened, I firmly asked the older girl to apologise. She said no, she wouldn’t. In a moment of misplaced anger, I slapped her. She looked at me in the eyes and screamed, “NO”, turned her back and stormed up the staircase and locked herself in her room for the rest of the night. So here was my 12-year-old daughter who had openly disobeyed my instruction and the physical punishment did not deter her from rejecting my authority. I was distraught all night. It was a miracle that the next morning, she did not hold it against me. But in slapping her, I understood for the rest of my life, a fundamental precept: The right to govern is a moral right. It cannot be demanded, it is merely given. You cannot govern anyone by force, not even your own child. The only way you can get obedience and compliance is if the child sees you on platform of morality, not a platform of force. Physical power does not resurrect a failed parent.

That precept is true of any political system as well. When politicians and bureaucrats choose to abdicate moral ground, businesses simply love the concomitant result. As a nation, the problem before us today is that society, bureaucracy and politicians see nothing wrong in what they are doing and in that context, today’s 16-year-old is asking what is wrong in going to jail for a short time, if the return-on-investment is lucrative enough?

Last month, I went to a private engineering college to understand the challenges faced by the industry in getting right talent. A very transparent young administrator gave me the run-down. The qualifying marks for an engineering seat is 45 percent. There is a test, albeit to determine how bad the student may be so that the amount of donation can be inversely settled. Once the matter is settled, whoever has referred the prospective student to the college gets a cash-back of anything from Rs 8,000 to Rs 20,000. It could be a tout or fellow villager, a school teacher, whoever brings the kid, gets the cash. On the spot. This is not one-off; this is standard operating procedure for 90 percent of engineering colleges. What happens when the kid cannot subsequently cope? No issues, large companies come with fishing nets and take them all and if someone gets left behind, he/she has to pay the placement officer some money and that person slips the weakling in to the next large fishing net. After a few months, the employer sacks the guy and he goes wherever but the family is happy that the kid got “campus placement”. The placement officers are not forgotten by the fishing net folks; they are taken on junkets to places like Dubai and Thailand! Students in their high school and college begin to build a world view and then they enact it. If we are blasé about the issue of integrity in public life, as we are today, what would happen to the nation?

Earlier, I talked about the cathartic example of my slapping our daughter. My show of force had failed to achieve anything. In reality, it turned against me. That night it occurred to me that if a spurned parent were to repeat the violent act, such an action, instead of getting compliance, could lead the child to seriously deviant behaviour; she could run away from home, take to drugs or kill herself. The entire night, I was sleepless and remorseful.

Today, when we see governments fail in the forests of Maharashtra, Andhra Pradesh, Odisha and the North East, it is a slapped child turning away. My daughter returned to me the next morning, forgiving me for the indiscretion, because at some level, I still had a moral right over her. But the lesson for me was not to take that for granted and not to push my luck.

So parliamentarians wave currency notes on the floor. A chief minister files a Rs40-crore income-tax return and the tax authorities just accept the explanation about her source of income; that she was given the money in small change, as tokens of affection, five rupees and ten rupees at a time by her followers. Serving generals usurp housing meant for war widows. Assembly men watch porn during a debate in the house. A spokesman for one party gets filmed on tape while fornicating in his office and the army chief accuses his ex-deputy of trying to bribe. Indians may well succeed, India will not. Would that be good for us? Do we want our children to be citizens of a failed state?

Tweets by @forbesindia
Sanjeev Aga: How To Grow A Spine - A Guide For Indian Managers
Terry Leahy: The Need for Value In Business