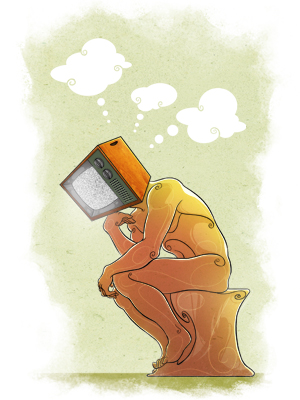 Television is democracy at its ugliest.
Paddy Chayefsky

There are no plain women on television.
Anna Ford

Television is for appearing on, not looking at.
Noel Coward

Television is becoming a collage—there are so many channels that you move through them making a collage yourself. In that sense, everyone sees something a bit different.
David Hockney

There was no sex in Ireland before television.
Oliver J Flanagan

Television knows no night. It is perpetual day. TV embodies our fear of the dark, of night, of the other side of things.
Jean Baudrillard

Television thrives on unreason, and unreason thrives on television. It strikes at the emotions rather than the intellect.
Robin Day

I find television very educating. Every time somebody turns on the set, I go into the other room and read a book.
Groucho Marx

Seeing a murder on television... can help work off one’s antagonisms. And if you haven’t any antagonisms, the commercials will give you some.
Alfred Hitchcock

If everyone demanded peace instead of another television set, then there’d be peace.
John Lennon

Tweets by @forbes_india
Under-30: A Pick of the Brightest
Taking the cover route