Solving for digital payments was just the first step for Razorpay co-founders Harshil Mathur and Shashank Kumar. As they have scaled, they continue to look for ways to simplify the financial lives of customers 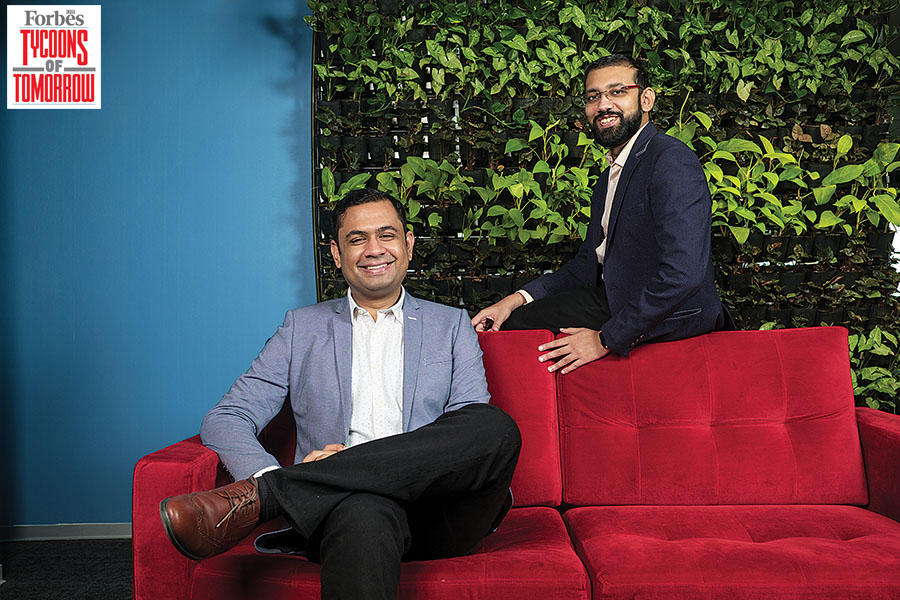 Razorpay Co-founders Harshil Mathur (left) and Shashank Kumar say entrepreneurs starting out must be able to think on their feet on a daily basis
Image: Nishant Ratnakar for Forbes India

In 2014, while working on side projects in their free time in the US, IIT-Roorkee graduates Harshil Mathur and Shashank Kumar found that it was difficult to accept digital payments in India. The duo realised that most young startups faced the same challenge, and it was time to solve for enabling payments for small businesses and young startups. It was also a clear opportunity to grow big and scale.

Seven years later, it seems like not just an opportunity well-spotted, but also well-executed. Their company, Razorpay, is the payments partner of choice for about five million SMEs, MSMEs, and large enterprises like Flipkart, Zomato, Airtel, BookMyShow and Swiggy. In just the past year, several companies like Meesho, Groww and PharmEasy, among others, that are powered by their payments platform, turned unicorns.

Building the payments gateway—a sort of POS machine equivalent in the online world—was not simple. “Digital payments is not something you can just build and deploy. We had to get bank approvals, regulatory approvals, etc.,” recollects Mathur, CEO and co-founder of Razorpay. And since then, with their agility, ability to innovate and a sharp focus on the customer, they have managed to stay ahead in the game.

For example, when the Covid-19 pandemic struck in March last year, business at Razorpay went down by 30-40 percent as business from travel dried up. They quickly shifted focus from segments that would stagnate to ones that would grow, such as ecommerce, online education and gaming. By June-July, they were back to pre-Covid levels and since then have been seeing a 40-50 percent month-on-month growth, “simply because we were able to support a lot of businesses that suddenly wanted to go online”, says Mathur. “We onboarded more merchants in the six, eight months of the pandemic than in the previous two-three years combined.”

It was also in October last year that they raised their unicorn round, a Series D of $100 million. They have since tripled the valuation to $3 billion, with a Series E of $160 million this April. 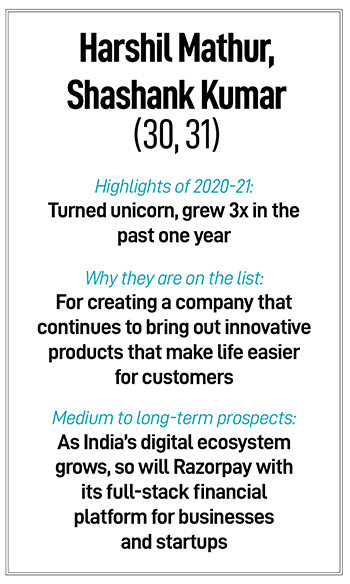 Razorpay has consistently found newer problems to solve for businesses, often drawing from their own experiences as a young startup. Co-founder and CTO Kumar recalls an incident in 2015 when Mathur, on vacation in Goa, had to log in at night to pay salaries to their eight to nine employees, after calculating taxes and filings that needed to be made, a process that took four to five hours.

Dealing with compliances and managing finances are challenges all small businesses face, so Razorpay has worked towards a full-stack platform, offering everything from payroll products and neobanking to corporate credit cards and insurance. “Most [insurance] providers do not pay attention to smaller businesses, because obviously, with 10-20 employees you do not see that kind of return,” says Mathur. Their tie-up with providers means they are able to provide insurance to their customer base even if they have only one or two employees.

“Razorpay’s biggest strength is their phenomenal product innovation engine,” says Ishaan Mittal, MD, Sequoia Capital India, which led Razorpay’s Series C in June 2019, and has participated in subsequent rounds. He recalls how, since their first investment, Razorpay has added multiple products like payment links and payment buttons to their mainstay—the payment gateway—while expanding to new segments, [business banking product] RazorpayX and [lending unit] Razorpay Capital. “This has expanded their product suite to include current accounts, invoicing, taxation and corporate credit cards. Their triad of payment, banking and lending products will continue to make them the go-to platform for businesses looking for end-to-end digital solutions, and position them as the central nervous system for India’s digital economy,” he adds.

While Razorpay is cash flow positive in the payments business, the banking and lending verticals will take time and investments in R&D to grow. “It will take us at least two to three years before those things start becoming profitable. And at that point, I think we will want to plan an IPO,” says Mathur.

Back in 2015 when they started, they were 10 people living and working out of a flat in Bengaluru. Today, after having seen exponential growth, the co-founders continue to be focussed on creating order out of chaos, both for themselves and their customers: “If you get into a problem you are not passionate about, it is hard to deal with, because a startup will be full of ups and downs. And get into a problem to which you can commit 10-15 years of your life,” says Mathur.

Tweets by @forbesindia
Forbes India 2021 Rewind: Best sports memories from an uncertain year
Best of 2021 Ep. 6: Rajesh Gopinathan on valuing outcomes more and effecting change from within at TCS