Eruditus and Ashwin Damera: A masterclass in wealth creation 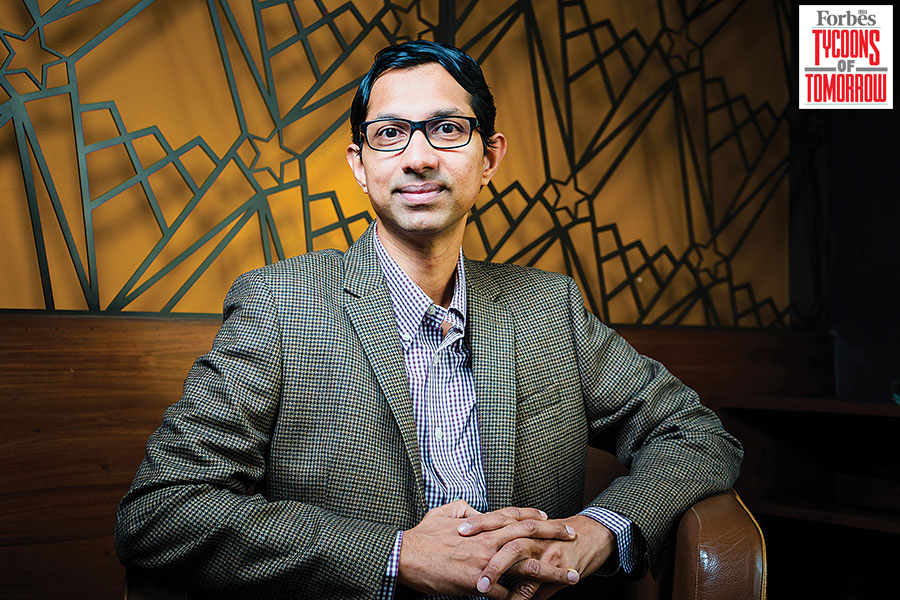 Eruditus co-founder Ashwin Damera has massively scaled his business over the last two years by expanding across the globe
Image: Nayan Shah for Forbes India

Value versus valuation? Instant versus distant? Local versus glocal? A rookie founder might fall in the trap of instant valuation and local salvation, but a chartered accountant (CA), who also happens to be a new-age tycoon, knows where the sweet spot lies. Meet Ashwin Damera, a slim, energetic, bespectacled man with a long-term vision.

Ask the first-generation entrepreneur about his edtech empire Eruditus, which is valued at $3.2 billion and primed to soar to greater heights, and the chartered accountant quickly dishes out a stratospheric number: $3 trillion. “That’s the market size of higher education globally,” asserts the co-founder of Eruditus, which along with its online division Emeritus, offers business and professional education to executives by collaborating with top-tier universities across the US, Europe, Latin America, India and China. “There are 20,000 universities in the world,” says Damera, who co-founded Eruditus with Chaitanya Kalipatnapu in 2010. “You can’t just play in India or the US,” he underlines. One must, he lets on, play in the entire pond, and not just in a small little part of it.

Damera’s pond is the entire globe. The 43-year-old has massively scaled his edtech business over the last two years by expanding across India, China, Latin America, US and Europe. “We are going much faster than any other edtech startup,” he claims. Look at the numbers. Five years back, less than 5 percent of the headcount was based outside India. Now it’s 40 percent. Around 800 employees of Eruditus are across the world. “We recently hired a Latin American CEO based in Sao Paulo to go after the Brazilian market,” he says, adding that his company is offering courses in Portuguese. “That is a big area for us.” 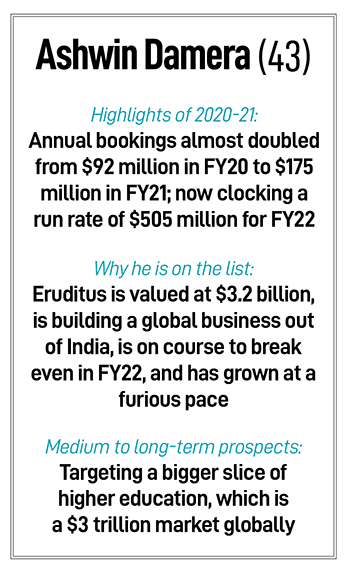 The big play has brought in bigger financial rewards. Annual bookings have soared from $11 million in FY17 to $66 million in FY19, and a staggering $175 million in FY21. Now the run rate for this fiscal is at $505 million.

Damera decodes the magical scale of his business. If one is in a retail business like Walmart, he explains, there are only two ways to grow. First is either one gets more out of the same store or one keeps on adding new stores. Eruditus, he stresses, has found a perfect balance. It’s a mix of existing courses and new ones. “It’s a nice interplay between the two,” he says. The content from short courses—two and three months—is used to create long-term courses, which range from nine to 12 months or more. What this means is the ability to spawn out new courses without starting from scratch. This also means less investment, or capex. “This is one of the levers which we figured out to grow,” he says.

Another lever of growth is to ensure that the fruits of labour are shared with all. “The best way of being wealthy is by giving,” he says. Fifteen percent of the company, he claims, is owned by key employees, including the founding team. Now what this means in terms of wealth creation is interesting. Around 150-odd employees have Esops (employee stock ownership plan) and on an average each employee has around $3.5 million (around ₹25 crore). “We will keep increasing the pool,” he says.

What gives him immense satisfaction, though, is something that all first-generation entrepreneurs have in common: A modest background and no history in business. The sense of achievement is palpable. “Coming from a middle-class family and building a global business out of India is an achievement of sorts,” he says. But what is most satisfying is something different. “Building a business in a segment where you’re touching lives is the most meaningful thing to do,” he signs off.

Tweets by @forbesindia
Best of 2021 Ep. 5: Shekhar Kirani at Accel on the power of entrepreneurship and what makes for great founders and VCs
Focus on customer problems, not valuation: Forbes India Tycoons of Tomorrow Ashwin Damera of Eruditus