'We have only one decade to save the planet': 12-yr-old activist

If in the coming 10 years we are not able to limit the warming of the Earth to 1.5 0C the effects will be permanent and devastating, writes Ridhima Pandey

Climate refers to the kind of weather that is typically expected in a region. Change is a process through which something becomes different. Climate change is also called global warming. The word itself explains what it means: Global + warm; that Earth has become warmer because of our endless human needs and greed. 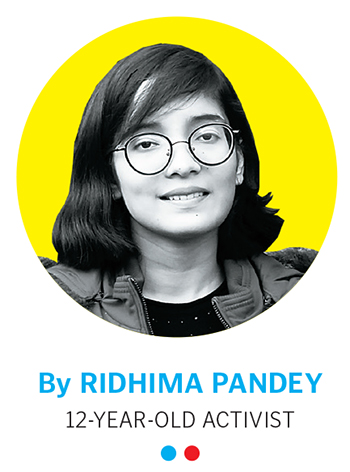 The first question that comes to everybody’s mind is, ‘Is climate change real?’ At first, our leaders and seniors denied it and refused to accept reality. However, many agencies proved that the writing is on the wall and that it’s a reality that we cannot ignore anymore. The effects are glaring and visible: Severe weather events, droughts, melting glaciers, rising sea levels and increase in wildfires are some of them. However, the best example of the adverse impact of climate change on human life in India is the high AQI (air quality index) level experienced in New Delhi.

Nature has given us ample hints of climate change in the form of extreme weather conditions, but our leaders, policymakers and even businessmen refuse to take them seriously. They continue to do what they want to without thinking about the future of others. They destroy nature for the sake of development and give the impression that they have forgotten that we have only one planet to live on.

Humans are the biggest culprits of global warming. Never have the actions resulting in climate change been so dangerous and bad. In the name of development and for human need and greed, we are destroying our environment. Such destruction not only affects us but also our flora and fauna. The instances of natural disasters have also increased in the last decade due to global warming. The Kedarnath, Kerala and Bihar floods are critical warning signs. These disasters resulted in the loss of hundreds of lives and yet we are not ready to learn our lessons. We are continuously doing work without any planning or scientific study to understand the adverse effects on our future. Such ad hoc development must be stopped if we need to save our planet.

Once we’ve grasped the enormity of the issue, the next thing that should come to our mind is: What should we do to stop global warming? Climate change has become one of the major global challenges of the 21st century. This is not an issue that can be handled by a single person or merely one country. We must all collectively try to contribute towards it… and that is possible only when people are aware of the problem.

As citizens of this beautiful planet, we need to lead by example. We must bring about certain lifestyle and behavioural changes that will lead to small but significant improvements in our surroundings. We must save water and energy. We should follow the three Rs: Reduce, reuse and recycle. We must stop using plastic. We should opt for car pooling and use public transport as much as possible. The government must encourage renewable energies… and we need to stop deforestation and plant more trees. The time to act is now else we won’t have the time or opportunity to regret.

(I filed a petition in 2017 against the Government of India in the National Green Tribunal, or NGT, saying it had failed to fulfil its duties to the Indian people to mitigate climate change. I have now filed an appeal in the Supreme Court against the NGT’s decision to dismiss my petition.)

We only have one decade to work on stopping global warming. We have already witnessed the consequences of climate change. If in the coming decade we don’t stop carbon emissions, the conditions would get worse as the years go by.

The next 10 years are critical because this is the only time in which we can act to reduce our carbon footprint. Our global leaders will have to play an important role in this as they have the power to make laws and rules. They must take this climate emergency seriously and think twice before using fossil fuels which increase the heat on planet Earth.

As per The Paris Agreement 2016, the countries were ready to take the initiative and limit global warming to 1.5 0C. However, due to their inaction and walkout from this agreement, it will become hard to achieve such goals.

If we don’t start to work on it now, we must get ready to face the dire effects of climate change. Most scientists have warned that the next 10 years are crucial and the world must slash its carbon emissions by half by 2030 to avoid catastrophic events. In case there are doubts, remember these points:
1. If the Earth warms by more than 1.5 0C, the world ecosystem could start to collapse.
2. The melting of glaciers and polar ice caps increases in warm conditions. It will result in a greater rise in sea levels.
3. Climate change along with rising temperature will also intensify forest fires.
4. We will have to brace for intense heat waves, more droughts and floods.
5. The warm weather will also increase many deadly diseases, which will have a bearing on the human mortality rate.
6. If things continue like this, a day will come when humans will be extinct.

Tweets by @forbesindia
Why the US-China trade deal targets corporate secrets
Volkswagen's strategy for India 2.0 has revved up the engines