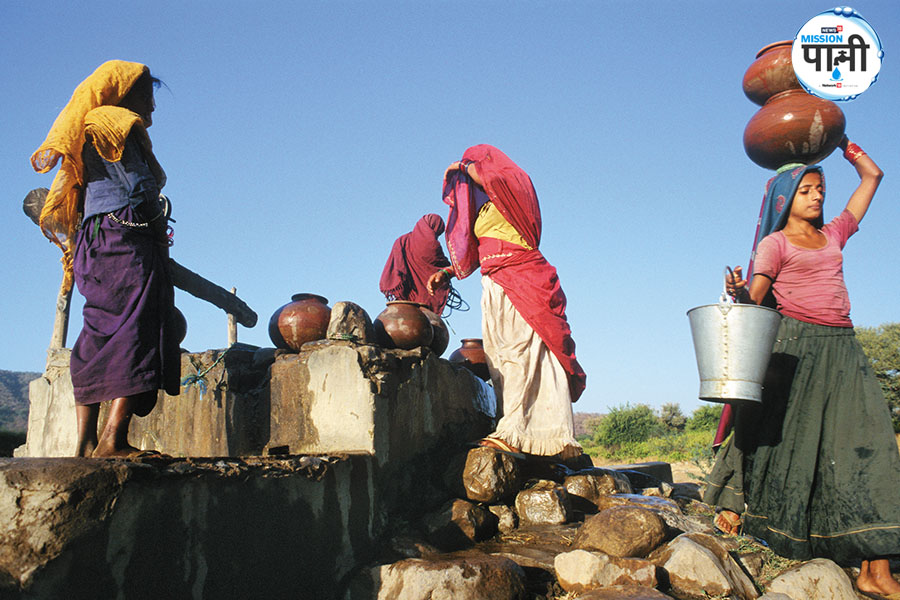 The responsibility of sourcing water lies with women, which often gives rise to health issues and lack of time for education
Image: Getty Images

In the 1980s the nomadic tribal community of Bawariya—traditionally known to make and sell local liquor illegally—owned land in Sadawton, a village in Rajasthan’s Jodhpur district, but never settled there. As the village was located in a hilly area, rainwater would flow down its slopes, making the region arid and farming impossible.

Around 10 years ago, Gramin Vikas Vigyan Samiti (Gravis), an NGO, decided to work on food and water security in Sadawton by “going back to the basics”; it meant tweaking designs of traditional structures instead of reinventing the wheel. For a region that receives less than 200 mm of rainfall a year, the NGO decided to start by getting the community to save as much water as possible through watershed management.

Step one was to build khadins (embankments to collect surface runoffs for farming) on every farm. “As part of the food-for-work programme, we brought the community together to make small khadins for individual farms,” says Rajendra Kumar, senior programme coordinator, Gravis. Khadins help accumulate rainwater and replenishes groundwater.

The proof of the pudding lies in the five-odd hectare green patch that flanks the newly built brick home of Mansukh Ram Bawari, who decided to take up farming around the time Gravis began its project in the region. “A year ago, there was nothing here,” says Kumar.

Although, in early July, there were no signs of the monsoon in the region, Bawari’s lush farm indicated the success of the khadins. “No one even had mud houses here. But today, thanks to the successful farming, 125 families have settled here,” says Bawari.

Earlier, farming was entirely dependent on the monsoon; but now the soil absorbs enough water for villagers to produce a kharif (winter) crop. “When the organisation first introduced khadins, we used to hear stuff like, ‘Yeh kitna chota hai, isse kya hoga [this is so small, what can it do]?’ But as people saw changes, they started adopting this technique. We have constructed about 5,000 khadins now,” says Prakash Tyagi, executive director, Gravis.

Gravis was founded by social activist Shashi Tyagi and her late husband LC Tyagi in 1983, with water and food security as its main objectives. Besides, the organisation, with headquarters in Jodhpur, works towards rehabilitation of the rural community in Rajasthan, Uttarakhand and Bundelkhand (in Uttar Pradesh) in the space of education, health and women’s empowerment.

About 30 km from Sadawton, Gravis has taken up projects in Akhadhna to develop water-sufficiency in a village that hasn’t seen a proper monsoon in about four years. Farming has been put on hold, as has MNREGA work for the past three years. But there’s no of paucity of clean drinking water, thanks to the community naadi (village pond) set up by Gravis with 10 to 15 beris (wells).

“Before the sanstha came to help us out, there was one government tanker that would come, and 40 people would stand around it. We would not even get one full pot of water,” says Bhanwar Singh, a villager.

Back then, the villagers would dig up the soil to find surface water. Gravis added a minor twist to those wells by adding a superstructure—to ensure the well didn’t collapse or any humans or animals fall into it—and a lid to prevent contamination. The contraption also held a silt-catcher to act as a filter. All these ensured the well water was usable in the long run.

Rani Devi, another villager, says, “Earlier, as soon as it would rain, our well would collapse. And whatever little water it had would be filled with sand; so it was of no use.” Now, the wells have been designed in a way that its water gets replenished via seepage through its walls that are built with loose boulders, sans concrete or cement.

“Our income comes from selling local fruits and vegetables and livestock. Each household has 20 to 25 animals. All 900 families and their livestock drink water from these wells,” says Singh, adding, “We’ve never fallen ill after drinking this water.” To maintain water quality, villagers have been barred from bathing or defecating near the pond.

In the village of Kishneri, about 40 km from Sadawton, the soil is softer and absorbs water easily. But most of the groundwater is saline. So villagers have to rely on rainwater for drinking and farming. Here, besides khadins, Gravis has designed wells—15 feet deep and 40 feet wide—to store water.

Says Chutra Ram Meghwal, a villager, “Every few years, we go down the well and widen it further from the bottom. Before the sanstha came, our wells kept collapsing. They started using gravel and soil to make it stronger, and added a pipe to ensure the water collected doesn’t touch the walls and make it weak. We are still using water from last year’s rainfall.”

Officials from Gravis say there is no one-size-fits-all solution to solve the water crisis. Every village, even in the same region, has to be treated differently. But the gendered nature of the problem remains constant.

“Society has assigned women the onus of fetching water over long distances. This leads to health issues and no time for education,” says Tyagi. To circumvent that, Gravis has introduced tanks in each household with capacities of 1,000 to 25,000 litres. Kumar explains the design: “There is a slightly elevated artificial catchment around the tank that allows water to flow in easily. There is a silt-catcher at the opening to filter out sand. Having individual tanks ensures there is a sense of ownership and responsibility.”

Setting up the tanks and wells cost Gravis close to ₹30,000 per unit compared to other organisations that charge as much as ₹1 lakh. “We use a lot of help in terms of labour from the community itself. Second, our design team uses resources available locally to reduce transportation cost. For instance, the catchment is made of local mud. Some other structures use cement, which is expensive,” says Tyagi.

Gravis also trains villagers on maximising farm output despite scanty rainfall. In Kishneri, it has encouraged them to grow sonamukhi (a medicinal plant whose seeds are used to make tablets and leaves to make tea) that can grow in low water levels. “There was a misconception that sonamukhi doesn’t allow other crops to grow. We distributed its seeds, and worked on changing mindsets. Today, their livelihoods depend on it,” adds Kumar of Gravis.

Meghwal, who owns 6 to 8 hectares in Kishneri, says, “This season, we have sold 15 quintal of sonamukhi and have earned about ₹45,000. Once it starts raining, we will use intercropping and sow seeds of bajra, til, moong etc.”

The latest project Gravis is working on is a biosand water filter, a technology it got from a joint project between the University of Calgary, Canada, and People for Progress in India, a non-profit based in the US. Tyagi says, “It is low cost, and made with gravel, stone and local mud. The water passes through its multiple layers, making it free of 92 percent bacterial contamination.”