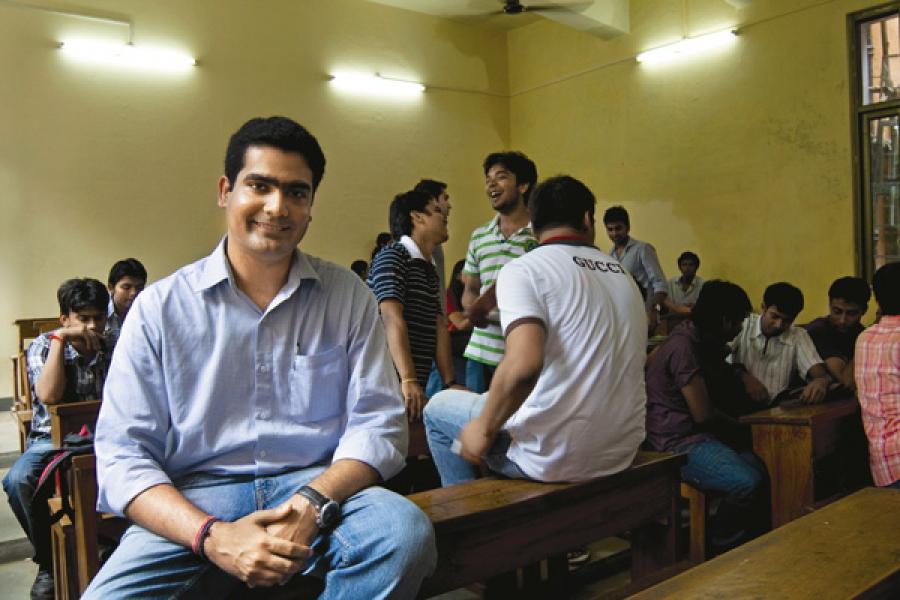 Kishore Biyani was in unfamiliar territory in 2006-2007. He had written a book, It Happened in India, and was evaluating publishers. He was in talks with a couple of publishing houses who wanted to work with him. But they told him that they would do a print run of 10,000 copies and price the book at Rs. 199. Biyani balked at the suggestion. Now, Biyani is not a man who thinks small. His Big Bazaar chain caters to lakhs of Indians who love a good bargain. Biyani wanted all these consumers to read his book. He knew that there was no way these people would pay Rs. 199 for a book. And 10,000 copies? Were they joking? He wanted a publisher who thought as big as him. Enter Rupa Publications’ Managing Director Kapish Mehra.

Rupa and Biyani reached an agreement. The first print run was two lakh copies. The book was priced at Rs. 99.

It Happened in India sold over three lakh copies. “Typically we look at books that can sell us a lakh of copies,” says the unassuming Mehra sitting in his office in Delhi’s Daryaganj area, “when we see that the content is right and the target audience is clear.”

Mehra knows his market: The growing number of people who want to read English books. English has always been a language for business communication in India. Now it is also gaining popularity as a general purpose language. Everyone from drivers, watchmen and house maids want to speak the language. “Everybody wants to speak in English as it adds to their skill set. Over the years we feel that the need to speak in English is only going to grow and this can be seen from the growth of our students,” says Aslam Moosa, CEO, Speakwell Academy. Speakwell has experienced a 100 percent growth in the number of students over the last five years.

Rupa celebrated its 75th anniversary in August 2010. It is the largest player in India, releasing over 250 books a year. It boasts of having Sunil Gavaskar’s Sunny Days and Anurag Mathur’s The Inscrutable Americans in its stables.

But it was in 2004 that Rupa really hit it big with Chetan Bhagat’s Five Point Someone. The book rewrote the rules of the publishing industry in India. An English book was considered a bestseller if it sold 10,000 copies. Five Point Someone and each of the other books he wrote sold a million. Priced at Rs. 95, it negated the threat of piracy.

How does Rupa do it? There are three key factors that help Rupa sell so many books. The first one is a very strong distribution chain. Mehra has a tie-up with A.H. Wheeler, the railway bookstore chain that has outlets across the length and breadth of India. His books are also sold at book chains like Crossword and Landmark. “Rupa has fantastic distribution, experience and a great gut feel of the market and are the big reason behind my success,” says Chetan Bhagat.

The second one is the price point. Mehra’s consumers expect to pay a certain price and that is the price at which he sells. And the number of people who buy his books from tier II and III towns is increasing. Thirty five percent of his sales are in places like Gorakhpur and Kolhapur. The remaining 65 percent are sold in metros like Mumbai and Delhi.

The third factor is volumes. Mehra bets on quantity to create a market. “Book sales are increasing. And Rupa is doing something right to expand the market. They understood at what price barriers a particular book can work and this is not easy,” says Himanshu Chakravarti, chief operating officer, Landmark.

But how can he afford to price his books so cheap? Does he compromise on paper quality, artwork for the cover etc.? In response, Mehra dumps a bunch of Rupa books on the table in front of this reporter. Mehra then gets books from other publishing houses and challenges him to find the difference in quality. He can’t.

Rupa has been growing at 50 percent for the last three years against an industry average of 30 percent. In an industry where figures are notoriously hard to come by, Rupa has a hit rate of 7 percent. That means out of every 100 manuscripts that come in to it, seven get published. It gets around 60 manuscripts in a week.

This unusually quick turnaround time is what attracts authors to Rupa. At Rupa, an author comes to know if his book will be taken by the publisher within three or four weeks of submitting the manuscript. If the manuscript is approved, the book is ready to hit the market within six months. Other publishers take around six months to approve the manuscript.

Biyani sums it up very well. “Rupa has an unparalleled distribution set up and that is well complimented by Kapish’s passion to have a pulse on the young reader’s expectations and his ability to cut down on the unusually long turnaround time that the publishing industry in India is so used to,” he says.

And because it has such a quick turnaround time, Rupa can afford to experiment with genres. There is an anecdote to it. Sometime in August 2008, five editors inside the Daryaganj office were discussing a manuscript that had recently come to them. It was written by a young girl. Normally the editors would come to a unanimous decision on the manuscripts. But this particular piece of work had caused the editors to argue long and hard. It was turning into a free-for-all. Mehra, who was passing by, joined the discussion.

Now Mehra normally doesn’t go against the judgment of his editors. But when he saw so much confusion within the team he took the final call. He decided to go ahead with the book written by an 18-year-old girl for the simple reason that the writer was very young and the genre was also relatively new to the Indian market.

Pink or Black, a story about a young girl’s experiences in boarding school, by Tisha Khosla was released in the latter half of 2008 and became a bestseller selling more than a lakh copies.

Another instance was Ravi Subramanian’s If God was a Banker. In 2007, Rupa took a gamble and published this book on corporate fiction. No other publisher wanted to touch the book. But Mehra saw a big market for it. He knew that a young country with a changing corporate culture would like to read about life at work. In fact, Mehra felt that this was one book that had the potential to sell bigger volumes even at a higher price. They priced the book at Rs. 195 and the gamble paid off. The book sold more than 2 lakh copies and led to the launch of another genre in the Indian book market.

A key reason that Mehra is able to understand young India is because he is the same age as his readers. He refuses to say how old he is, mischievously smiling, “I am on the right side of 30.”

And because Mehra takes risks on new authors and often gives them their first break, the relationship between Rupa and its authors is strong. Mehra claims that none of the authors have left Rupa. Authors get 10-15 percent royalty on sales of every book. If he feels that the author is a good bet, he pays them an advance.

Mehra understands that the market opportunity is huge. And to maintain this growth he wants to keep his portfolio diversified. From college fiction to corporate fiction to chic-lit, he has done it all. But his next bet is quiz books and ‘How to’ books. He wants to come out with books on the lines of Kaun Banega Crorepati. He feels that ‘How To’ books will work because they tell readers about writing a CV or buying property. And the risk taker in him is always on a lookout for that new writer or book that will again shake up the publishing industry. In a way, his job is like that of a fund manager who looks for the best stock to bet on. But unlike a fund manager, in most cases he gets it right. Of course, there are some misses, but he feels that is part of the game.

As he sits in his corner office at Daryaganj, he looks across from the pile of books that he has gathered on his table. Some of the books would be hitting the market in the coming week. His Blackberry beeps. It is probably another manuscript on info@rupabooks.com. He smiles.

Maybe he has found his next Chetan Bhagat.

Correction: The Inscrutable Americans was written by Anurag Mathur and not Anand Mathur as stated earlier.