TTK Prestige is looking for life beyond the kitchen 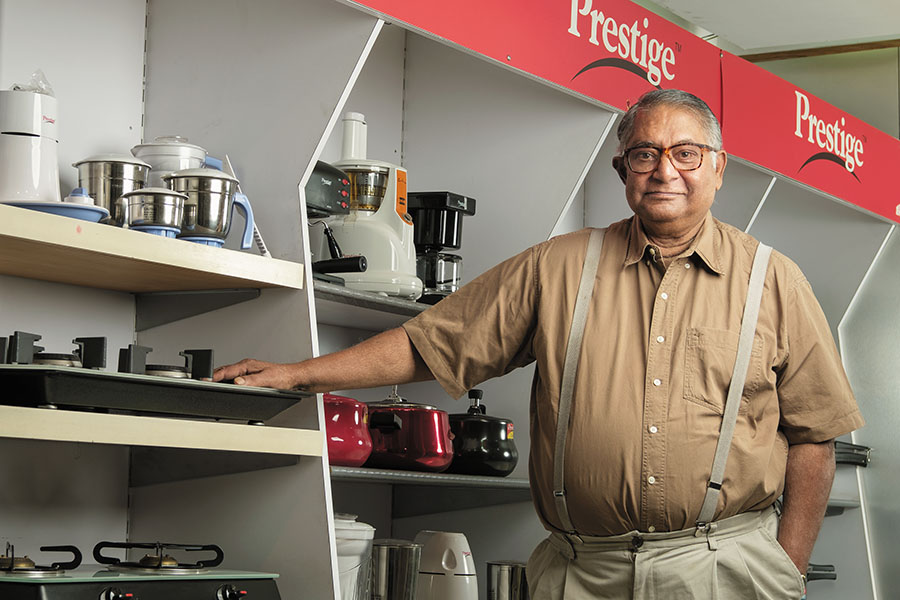 In April 2016, Bengaluru-based TTK Prestige, which manufactures six million pressure cookers a year, forayed into a new line of business in the home category in a bid to find new avenues of growth. While its overall kitchen appliances business was reporting under 10 percent growth, its pressure cooker sales, which the company is synonymous with, was beginning to report sub-five percent growth. The company retails about 190 different pressure cookers.

“We had to find a business outside of the kitchen to grow,” says TT Jagannathan, executive chairman, TTK Prestige Ltd, India’s largest kitchen appliances company, which reported a profit of ₹257 crore on revenues of ₹1,746 crore in fiscal 2018. The company placed its bet on a range of electric and non-electric home cleaning products such as mops, vacuum cleaners, floor polishers, steam cleaners, air purifiers, ladders and bins.

“We examined a lot of businesses, such as fans and geysers, but these were in the B2B (business-to-business) space, which we have no idea how to run,” says 70-year-old Jagannathan, who is a gold medalist in mechanical engineering from IIT-Madras and a PhD in operations research from Cornell University. “In the white goods category, there is no way one can compete with the Koreans in India; they have a new [product] model every week.”

Mindful of their core consumer, which is the homemaker, the company looked for product solutions in the home cleaning category. Interestingly, the idea gained momentum after Jagannathan, who also heads research and development at TTK Prestige, invented an electric mop. “It sweeps, scrubs and mops, and it cleans so well that you can eat off the floor,” claims Jagannathan, who got the idea to develop the product in 2011 after his domestic help went on leave. It took him four years to develop the Hero Mop. “For one month, my wife and I shared the mopping [duties] and I tell you it’s not easy. That is when I thought that there should be a way to mechanise the process,” says Jagannathan.

Priced at ₹8,995 apiece, Jagannathan’s mechanised Hero Mop is the flagship product of the company’s new ‘Clean Home’ category. While he takes pride in his invention, he is quick to admit that the product, due to its “balky price”, hasn’t done well. “Anybody who can afford this has a maid at home to mop,” says Jagannathan. “But it’s doing well overseas.”

Likewise, the company’s 32-month-old Prestige Clean Home vertical has not been a runaway hit, accounting for ₹22.65 crore or under 2 percent of its fiscal 2018 revenue. However, the category reported a growth of 74 percent over the previous fiscal. 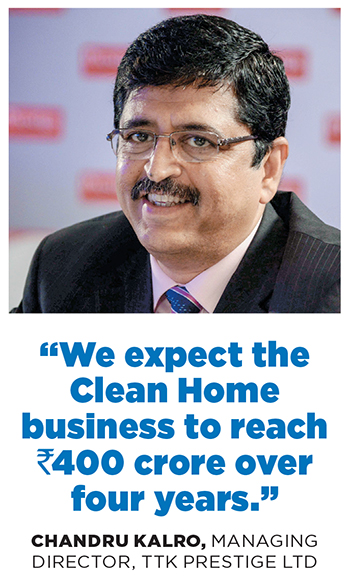 “I’m not yet making profit in this [category]… advertising costs are [currently] bigger than the margins I make,” Jagannathan candidly admits. But the company is not giving up on the category just yet. “We expect this business to reach ₹400 crore over the next four years. We are also getting into the water purifier segment in a much bigger way,” says Chandru Kalro, managing director, TTK Prestige Ltd.

In fact, every consumer brand in India, from their respective vantage points, is looking at the home market in different ways. “Havells, which started as an electrical company, is trying to do all sorts of home-related appliances (from fans to coffee makers). Blue Star, which started off as an air-conditioning company [manufacturer], has got into water purifiers in a big way,” says Ankur Bisen, senior vice president, Technopak, a retail consultancy firm. “As a brand, TTK Prestige stands for trust and legacy, and to that extent they have an advantage to explore multiple other categories in home.”

That said, TTK Prestige’s six-decade-old pressure cooker business has suddenly gained momentum, thanks to a growth in rural demand. While a pressure cooker saves on cooking time and Liquefied Petroleum Gas (LPG) fuel, traditionally, it was of no use to rural households as they depended on firewood, coal and cow-dung as the main sources of fuel. Besides, a pressure cooker is a relatively high-cost product priced ₹1,000 upward.

Today, with more rural households getting LPG connections—due to the Pradhan Mantri Ujjwala Yojana (PMUY) launched in 2016 by the central government that guarantees the supply of cooking gas connections to below-poverty-line families—“everyone must have a gas stove and a pressure cooker,” adds Jagannathan.

TTK Prestige’s sale of pressure cookers, mixies and gas stoves in rural areas has surged to ₹100 crore in the April to November period of the current fiscal. In the previous fiscal ended March 2018, the company’s rural business was just ₹3 crore. “With this [rural] demand we expect our pressure cooker volumes to go over eight million [over the next year],” says Jagannathan.
Aiding the rural spurt are NBFCs such as microfinance organisations that are financing the sale of kitchen products to rural consumers.

In a recent analyst call, Kalro had said that the company’s domestic business is poised to clock a 15 percent growth over the next four to five years, which would in effect double its turnover. The government scheme, he added, would open up at least 8 crore new kitchens for the company to serve. “We are not looking at one specific product line that will help us achieve that growth rate, but an all-around growth rate, pressure cookers in particular.”

*****
In terms of volume, the pressure cooker market in India is 15 million-strong, of which TTK Prestige has a 40 percent market share and rival Hawkins has a 27 percent share. The remaining share comprises largely the unorganised market. According to Jagannathan, “There are about 800 pressure cooker companies in India. But they make low-priced products which could burst in your face.” 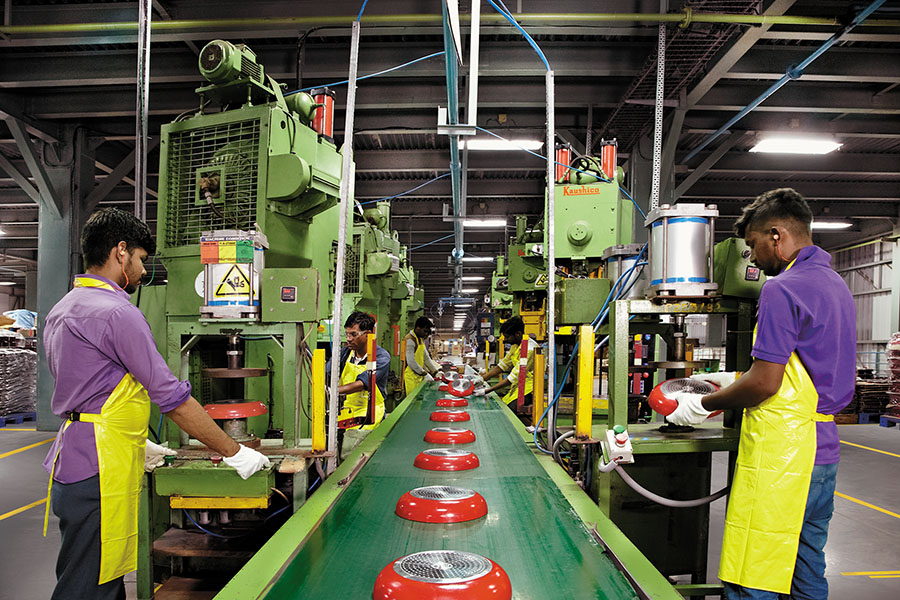 In 1955, Jagannathan’s father TT Narasimhan started importing the Prestige brand of pressure cookers from the United Kingdom. It was a profitable business from day one, recalls Jagannathan, so much so that his father started manufacturing the products in Bengaluru (then Bangalore) by 1959. The parent UK company collected royalties for the use of their brand name.

From one factory in Bengaluru to six factories across India, TTK Prestige today manufactures pressure cookers for the Prestige brand, globally. “Every cooker they sell is made by me,” says Jagannathan with a smile. In 1997, UK’s Prestige cookware brand was bought by Hong Kong-based Meyer Group.

TTK Prestige was, in fact, the only profitable business that Jagannathan inherited from his father in 1972. Those days, the TTK Group, founded in 1928 by Jagannathan’s grandfather (former Union finance minister) TT Krishnamachari, had diverse business interests ranging from the manufacture of condoms, maps and atlases, innerwear, clocks, pens and pressure cookers. They even manufactured, and still do, the Woodward’s Gripe Water that is given to babies to aid digestion.

“I had got a nice job in America to teach operations research [now a defunct subject] and had decided to settle down there,” says Jagannathan. But when his father broke the news to him that the group was almost bankrupt, Jagannathan was forced to give up his American dream. “I had left my books and winter clothes in America thinking that I would be back in one year because I didn’t have it in me to run a business,” he says, matter-of-factly. “I was an academic… I didn’t know accounts, finance, HR and marketing.”

The biggest loss-making entity within the TTK Group was maps and atlases, which was a partnership firm with Bertelsmann of Germany. According to Jagannathan, Bertelsmann had estimated a demand for 8 million atlases and 30 million maps per year and had accordingly set up a printing press in Chennai, in 1965. But those estimates turned out to be far-fetched, as the partnership firm was reporting losses of ₹80 lakh a year by 1972.

Starting off as general manager of the maps and atlases business, Jagannathan, the self-proclaimed academic, actually got down to tightening the nuts and bolts in the company.

“We had printing machines that were lying idle, so I secured print jobs from advertising firms that helped us arrest losses to some extent,” Jagannathan recalls. Today, the maps and atlases business (formerly TTK Maps) is part of another listed group company, TTK Healthcare. Jagannathan says, “Only 1 million atlases are sold in India and almost no maps are sold because of Google.”

Then, in 1974, he relocated to Bengaluru to take charge as managing director of TTK Prestige, after the previous MD was sacked by his father on account of misbehaviour. Since then he has made Bengaluru his home.

*****
Till about 2001, TTK Prestige only made pressure cookers, having a range of about 12 models. Its target audience was solely the homemaker, so much so its ’90s tagline ‘Jo biwi se kare pyaar, woh Prestige se kaise kare inkaar’ (One who loves his wife, how can he say no to Prestige) became a household catchphrase. With the homemaker firmly behind the company, Jagannathan expanded the product portfolio to include cookware, mixer grinders, gas stoves, kettles and ovens, among other appliances. The diversification, however, was the result of pressure cookers being slapped with a 57 percent tax—a combination of sales tax and excise duty. Currently, 50 percent of TTK Prestige’s revenue comprises pressure cookers and cookware.

“I believe that it’s still a case of ‘too little, too late’,” says Raghu B Viswanath, chairman and chief vision holder of Vertebrand, a brand value advisory and marketing consultancy firm. “Except Hawkins in the pressure cooker segment, there was virtually no branded competition in the other segments. You just had Sumeet in mixies and BPL in gas stoves. They could have exploited the opportunity [of diversifying] much earlier and could have easily been three times the size that they are today,” adds Vishwanath.

In Jagannathan’s defence, TTK Prestige’s profitable pressure cooker business gave him time to restructure and shut down all the non-profitable businesses of the TTK Group. “People say the TTK Group is so old and diversified, yet we are small with a valuation of $1.8 billion (which includes the group’s stake in the two listed entities, TTK Prestige and TTK Healthcare, as well as land assets and cash reserves),” Jagannathan says, adding, “They don’t realise that we [as a group] didn’t have much money till 2001.”

TTK Prestige achieved another key diversification over the past year. This time, Jagannathan admits to having tried to achieve this goal five years earlier. The company has tied up with top foreign retailers for the export of its cookware range. “These would be white label exports to all the big guys,” says Jagannathan, while refusing to name any of the retailers. The move would see TTK Prestige’s international business swell to 10 percent of its revenue next year from 5 percent at present.

Jagannathan’s role as executive chairman is not to run the company—that has been entrusted to the company’s MD since 2001. Interestingly, all three of Jagannathan’s sons–Mukund Thattai, 42, TT Lakshman, 40, and TT Venkatesh, 36–have not shown interest in taking up executive positions in the company.

Tweets by @forbes_india
How the Jhunjhnuwala brothers redefined their legacy
UC-RNT: Tightening the purse strings