The Neemrana Art of Resurrection 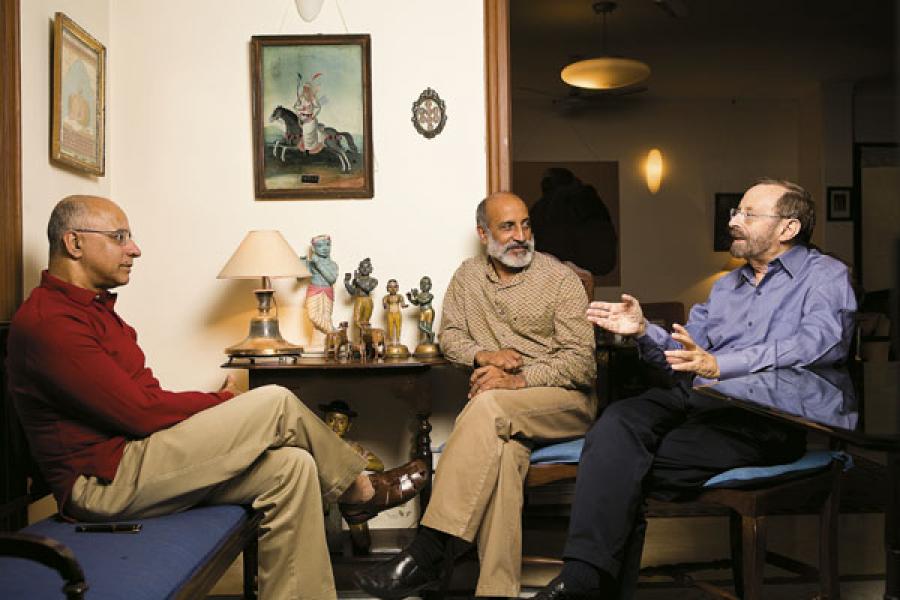 Aman Nath and Francis Wacziarg, founders of Neemrana Hotels, are an unusual twosome in business. For starters, they call their enterprise “non-hotels”. Here, visitors rest in the lap of a historic past. Guests do not come as “superfluous tourists in India”; they come to return as “informed travellers”.

The two were brought together by their research interest in Shekhavati frescoes in the havelis of Rajasthan. While they were studying these frescoes in 1986, they chanced upon, and fell in love with, a 15th century fort called Neemrana, a hundred kilometres from Delhi. They bought the place for a princely sum of Rs. 6 lakh so that they could restore it. At the time, they did not know what they were going to do with the place. In 1991, Neemrana Fort-Palace became their first non-hotel. In the following years, the Aman-Francis duo restored one historical location after another.

They have never borrowed money. Their enterprise has built such a reputation that owners seek them out, hand over their ancestral heritage and let them restore and run it. In the hospitality world, Aman and Francis are counterintuitive — a rare quality, but one that is critical to create a unique identity in a crowded sphere.

I am in Delhi, meeting the two to understand the secret behind their counterintuition.

Aman’s family was displaced from Lahore, Pakistan. He grew up as a brilliant student and graduated in history from the University of Delhi, took a fascination for things mediaeval and in the course of life, met Francis.

Francis is the original nomad. His parents had him on board a ship on Cuban waters while fleeing the Nazis. Francis travelled through Cuba, France, Morocco, England, Germany, Mexico and Brazil before making India his home.

“You have to be comfortable with displacement. Decadence sets in when you are in one place. You must take the road less travelled.”

I have difficulty sifting two voices that seem to be saying the same thing.

They explain their passion for picking up properties that would not be just another hotel in the middle of a tourist destination, but would become a destination in itself. They tell me that their secret is not to take on a site and build over it. “When we bought Neemrana, it was a bombed out place and people kept saying why don’t you rebuild it?” says Aman. “We do not build anything. We work to restore what was once built.” In doing so, they do not plan so big that it is bound to fail. They work slowly until the place presents itself again. It is a work of love.

Francis chips in. “Choices you make in life make you progressively counterintuitive.” The man was once a banker, sourced clothing from Bangladesh and India, was a pseudo-journalist and even a diplomat for a while and is now an entrepreneur. To be counterintuitive, he adds, “You must deeply question, you need to have a questioning mind.”

Aman exemplifies what Francis is saying with a story they heard from the legendary G.D. Birla. The grand old man had gone to visit a jute mill owner in pre-independence Calcutta. As Birla was entering the lift, the liftman politely told him to take the staircase. The lift was for the sahibs. Birla walked up to reach the meeting floor and was about to take a seat, when a chaprasi showed him another place meant for the natives. “Why do we need to put up with this?” asked Birla.

Soon a group of Indian businessmen got together and decided to have their own jute mill. The Englishmen promptly land locked it. The Indians went to court. The judge, an Englishman himself, granted relief. But it did not stop there. The Indians could not use English ships and had to use Japanese vessels to send out their exports.

“When you are surrounded by challenges, you have to be counterintuitive. When the Englishmen left, our own successive governments took on the task of throwing challenges at us. We are a challenged nation and that is why we thrive”. I do not know which of the two said that.

It is time to wrap up. Before we say goodbye, I have a question: How does someone know that his calling is here?

Francis says, one must ask, what is it that I love doing the most? “If you really enjoy doing something, if it feels smooth, the calling may just be in there.” Aman says you know it through intent, through purposeful listening. “All our lives we listen to parents, teachers, our friends and everyone else but finally, you must listen to your own self.”

At the door, they give me a sheaf of brochures. On the cover of one, I read a profound line: “Confer with your inner self. Listen to your voices in solitude. Then, dream and act with the handful whose minds can widen your vision.”

I step on to the pavement. The mellow winter sun is in slumber and a bevy of parrots noisily descends on the precincts of the stately Humayun’s Tomb right next door.