Tourism Business in the Middle of Nowhere

Sanghamitra Jena talks about setting up a touring business in Orissa, against all odds 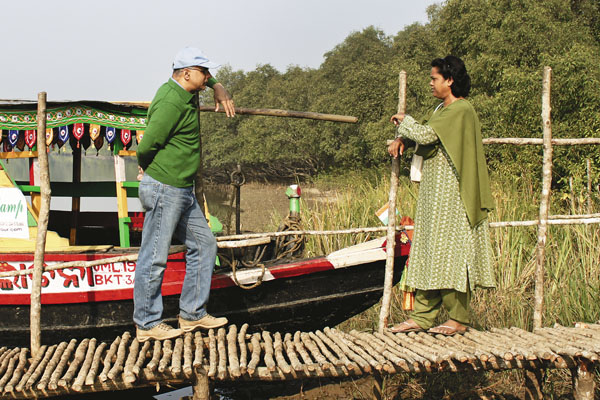 Name: Sanghamitra Jena
Profile: Founder of touring company, Eastern Treasure India Tours
She says:Every time someone threw a stone at me, I picked it up and made it a part of my foundation.
In life, you have to always look at what is left.

My flight from Kolkata landed in Bhubaneswar at night and we stayed there overnight. Next morning, we left early by road. For the first three hours, it was a comfortable ride on the national highway until we turned into a single-lane motorway across a vast flat land all the way to the Bay of Bengal. It is winter and a haze mellows the sun; as far as I can see, there are freshly harvested paddy fields. Two giant rivers, the Bramhani and the Baitarani converge here.
Soon we see the expanse of the rivers. There is the occasional boat ferrying people across. We are headed to a point little known to the world; it is called Dangamal.
This is a tiny village bordering 672 sq. km. of luxuriant mangroves that are home to the giant Indian saltwater crocodiles. It is an unbelievably beautiful and relatively un-spoilt place. There is the usual forest rest house here, but for the real enthusiast, there is tented accommodation of commendable quality run by a first generation woman entrepreneur named Sanghamitra Jena. I am here to see her.
“I was born in 1968. My father was a public works department engineer and he used to get posted to various places to supervise road construction. We are a brood of five girls and a boy. I am the eldest. I studied in Oriya-medium schools and finally finished with an honours degree in history. After that I did my B.Ed. but found that I did not like the way the system requires us to teach. In the meantime, I was married off and went to Kolkata.
“There, one day while watching television, I saw a programme on tour guides and a woman-guide was conducting a group of Westerners somewhere in Mumbai. I was fascinated. I felt I could do that. After some years, when we came back to Bhubaneswar, I contacted the government-run tourist office to check if they ran courses for would-be tour guides. There was a three-month course coming up and I signed up after paying a fee of Rs. 200.
“The course done, the difficult part began. No one wanted a woman as a tour guide. Finally, I joined a local travel company for Rs. 700 a month and started showing tourists in and around Bhubaneswar. Conducting overnight tours was out of question. One day, an American woman named Lyle Lawson asked me if the temples and ruins around Bhubaneswar were all that was there to Orissa.This led to a long conversation. I told her about the fascinating world of textiles, of tribal folks in faraway places, of nature away from the beaten track. The next day, she asked my company to custom-create a tour for herself and a companion — me. My colleagues tried to dissuade her, saying that it was risky; many places were uninhabited and potentially dangerous. How could a woman guide her? She would have none of that. She retorted that they were insulting her in calling me a woman. So, off we went and that is how I started conducting specialty tour groups that focused on tribal culture, nature and such like.”

But how did you end up becoming an entrepreneur?” I ask. “It was a story of adversity,” she says. “After many years in the same organisation, I had to leave because of disagreements with a new supervisor. For a moment, I was at the crossroads. To my surprise and delight, it led to a flood of offers from other tour operators who had known my work. Seeing that, I told myself that these people are reaching out to me because they have confidence that I could bring them business. So why wasn’t I doing it for myself?
“I had a saving of just Rs. 40,000. I bought a laptop and started sending mails to people I knew from a cyber-café. Eastern Treasure India Tours was born. Clients started coming, I took them on my off-the-beaten track tours to not just places in Orissa but also Pelling, Gangtok and Kaziranga. Word spread. Business grew. Then one day, I felt I should have a product that enables the nature-lover to enjoy a place like the mangroves of Dangamal by living in a completely rural setting. So, I came to this village and I leased a plot of land for five years. I started a high-quality, tented accommodation, complete with Western-style toilets and clean food in a completely rural surrounding. I built a make-do Web site so people could check out the options and pay online.”
You make it sound so fairy tale. Was it really all that simple?” I ask. “Of course, not. To begin with, being a woman was a challenge while dealing with people in a male dominated industry and then there was always the issue of dealing with forest officials and the labour inspector and the police. But I always found someone who was willing to support me. Sometimes, I had real adversities. But every time someone threw a stone at me, I picked it up and made it a part of my foundation. Along the way, there were personal setbacks and sometimes serious business problems. In life, you have to always look at what is left.”
I am not in Mumbai or Bangalore. This is Orissa. This is not a land of enterprise. For girls, there is a cul-de-sac called marriage. Yet, here is Sanghamitra who has built a business in the middle of nowhere.
Before we leave for the creeks to see the giant crocs basking under the mangroves, I ask her the size of her business this year.
She is bashful for a moment. Then she replies, “I will touch a crore this year”.
Subroto Bagchi is Co-founder & Gardener, Mindtree Ltd.

Show More
Thank you for your comment, we value your opinion and the time you took to write to us!
Comments 25