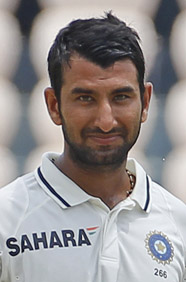 India's young No. 3 Test batsman is living a charmed life. He averaged 82 over the past year and hit a hundred every three matches. Pujara is currently the sixth best Test batsman in the world; the only Indian in the top 10. However, he's played most of his cricket in friendly Indian conditions and upcoming tours to South Africa, New Zealand and England will give Indian fans a better sense of just how good he really is. His textbook stroke-play and long innings have drawn comparison to India's previous No. 3, Rahul 'The Wall'Dravid. Dravid really performed when the chips were down and Pujara wasn't able to hang in there when England were on top in the Test series. But he has age and technique on his side.
Fast Fact: ?Pujara tied the knot with Puja Pabari in February.