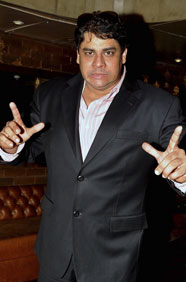 In another tumultuous year for Indian politics, the burly comedian known for his satirical TV show The Week That Wasn't has had no shortage of material. He's impersonated and poked fun at everyone and everything from Narendra Modi to Rahul Gandhi to Jayalalithaa to Isro's Mars Mission. He was nominated for the best comedy performance by an actor/actress award in the Asian TV Awards 2013. Apart from his TV show, he's been busy doing corporate gigs.