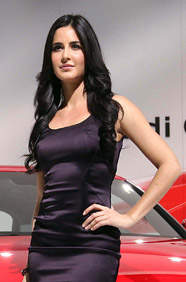 Katrina Kaif is the only woman in the top 10 celebrities list. Ironically, till a few years ago, few in Bollywood believed that she stood a chance in the industry: She didn't know Hindi and everything about her was 'just another pretty face'. But Kaif has worked hard and she's proved her detractors wrong. Following the success of her film Ek Tha Tiger last year, Kaif delivered another hit this year with Jab Tak Hai Jaan. That, combined with earnings from her brand endorsements, has propelled her into the Top 10. With 15 brands in her kitty, Kaif comes fifth in brand endorsements-after MS Dhoni (23), SRK (19) and Amitabh Bachchan and Akshay Kumar (both 16). If you just take a simple peer-to-peer comparison, with total revenues of Rs 63.75 crore, Kaif earned almost twice what Deepika Padukone did. That is despite Deepika's best year in Bollywood so far, with three movies, two of them blockbusters. That said, one would expect Kaif to have the highest fame count among Bollywood actresses. She ranks No. 3. No. 1 in the fame count is Priyanka Chopra; Deepika is at No. 2.