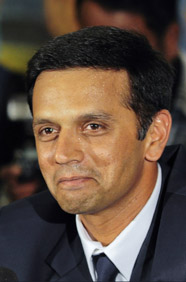 Rahul Dravid was nothing short of an inspirational captain for the Rajasthan Royals. The elder statesman, who is more famous for classical technique and long innings, smashed his way through IPL bowling attacks like someone half his age. With an uncharacteristic strike rate of 110, he led from the front and took the Royals to the semis of the IPL and the final of the CLT20. He's now cementing his place in the commentary box alongside former colleague and friend, Sourav Ganguly. His last game, the loss in the CLT20 final to Sachin Tendulkar's Mumbai Indians, didn't get much fanfare but that's probably how he'd have wanted it.
Fast Fact: ?Dravid was conferred the Padma Bhushan this year.