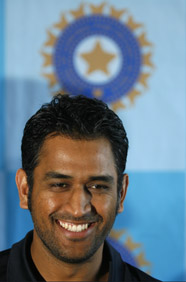 It was another great year for MS Dhoni. Though he didn't win the IPL with the Chennai Super Kings this year, as is almost a habit with him, he took Team India to the top of the ICC ODI rankings by winning the Champions Trophy in England. With two new endorsements (including TV channel Star Sports), his portfolio boasts 23 deals, making him the most marketable person in India. His ODI form this past year has been great, averaging 56 compared to his already-high career average of 53. Though the Test series loss at home to England was a major disappointment, he bounced back with a sensational 224 against Australia in Chennai and finished the year averaging 52 compared to his career average of 39. His hair might be greying but Captain Cool looks as hungry as ever. With 'elder statesman' Sachin Tendulkar retiring, Dhoni's role in leading the young team will be more crucial than ever.
Fast Fact: ?Dhoni's motorcycle racing team Mahi Racing Team India has won six out of the 12 races in the 2013 FIM Supersport World Championship.