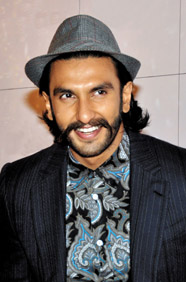 Lootera, which was Ranveer Singh's significant release during this year, did moderately well at the box office, but Singh wowed audiences with his performance. The movie, inspired by O'Henry's short story The Last Leaf, had Singh remarkably at ease in the 1950s setting. One critic wrote, "Ranveer has been entrusted with a complicated character so early in his career.The character has disconcerting shades and it is imperative that he uses his eyes to leave a mark, which he does so at a variety of stages. He's simply fantastic!"
Fast Fact: ?After completing his studies, Singh worked for a few years as a copyrighter with agencies like O&M and JWT.