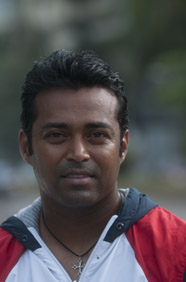 Leander Paes didn't have quite as good a year as 2012, but he had plenty to be proud of nonetheless. Along with doubles partner Radek Stepanek, he won the US Open-his 14th Grand Slam title-and collected $230,000 in winnings in New York. He became the oldest male grand slam winner at 40. Paes finished the year with $456,777 in tour winnings and an ATP 250 event title in Winston-Salem in North Carolina. He competed in the World TeamTennis tournament with the Washington Kastles and was invited to the White House to meet US President Barack Obama in July. Back home, the Union sports ministry recommended him for the Padma Bhushan in 2013. He received the Lifetime Achievement Award from the West Bengal government, presented to him by Chief Minister Mamata Banerjee. He also made his Bollywood debut in Rajdhani Express. A Buddhist, Paes continues to donate 15 percent of his earnings to his orphanage Future Hope that has helped about 10,000 children in Kolkata.
Fast Fact: ?Both his parents are Olympians. His father Vece won the bronze in field hockey and his mother, Jennifer, competed in basketball in the 1972 games.