Letter From The Editor: Chasing the BRIC Dream

There is now only a 50:50 chance that India might make the cut as a developed nation in less than four decades

About three weeks ago, Ruchir Sharma was in our Mumbai office to chat about his latest book Breakout Nations with our editorial team. Ruchir has quite an envious job. He heads emerging market equities at Morgan Stanley, based in New York. And that allows him to spend a week every month in a developing country somewhere in the world. 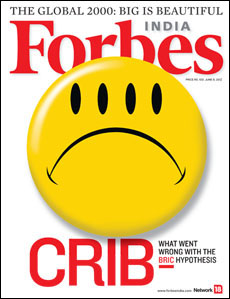 Given his unique cross-country perspective, it was obvious that the conversation would be lively and insightful. More importantly, the launch of Breakout Nations, which Ruchir claims has already sold 30,000 copies in India, comes at a critical juncture for India and the rest of the BRIC nations.

In 2001, when a set of Goldman Sachs economists created the BRIC acronym, it signalled a huge global power shift from the developed world to the developing world. The report also made a dramatic prognosis: The BRICs would collectively surpass the US economy by 2050 in terms of gross domestic product (GDP). Till 2007, this shift in global demand actually happened more quickly than was anticipated. And up until the beginning of 2011, most experts believed that this growth was unstoppable.

In the last 15 months though, the sheen has started to wear off. In India, for instance, the reform agenda has derailed, raising doubts on whether we will be able to attract investment, build infrastructure, put money behind education and healthcare and help billions climb out of poverty. China, Russia and Brazil too have their own unique challenges. So much so that Ruchir reckons there is now only a 50:50 chance that India might make the cut as a developed nation in less than four decades.

For this cover story, our team reached out to some of the leading economists and market strategists around the world, including Jim O’Neill and Roopa Purushothaman, the original authors of the BRIC report, and Nobel laureate Ronald Coase to re-assess the BRIC hypothesis. Is the BRIC magic really starting to fade? Or is it merely a temporary blip? Could we see the BRIC being eclipsed by a new set of emerging market stars? Discover the answers on page 34. Also, tell us what you think India needs to do differently to still make its tryst with destiny in 2050.