Letter From The Editor: Cyrus Mistry's Baptism by Fire

The new chairman has to take a set of leadership calls at Tata Steel. They could be a pointer to the manner in which Mistry's tenure could unfold

Cyrus Mistry’s honeymoon is over. After barely three months in the hot seat, the 44-year-old chairman of the Tata group is already squaring up to the biggest challenge of his tenure. The group’s $26 billion sprawling steel operations are in deep strife, especially across Europe. For the next two years, there’s very little scope for a recovery. An asset sell-off is on the cards—but that’s unlikely to generate cash in a depressed market. 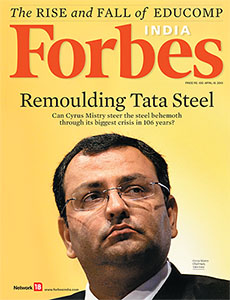 Back home, Mistry has his share of challenges. Tata Steel is in the middle of a $8 billion investment in Kalinganagar in Odisha. Quite easily the country’s biggest industrial project, the Kalinganagar plant was meant to be a hedge against the downturn in Europe. But until the time Mistry began rolling up his sleeves and decided to take a hard look, the massive project seemed to be all but spiralling out of control, with huge time and cost overruns.

Senior Assistant Editor Prince Mathews Thomas has been tracking this story for many months. After coming back from the Kalinganagar site, he says the real climax is round the corner. In the next few weeks, Mistry will start announcing the key decisions that could have the maximum impact on the firm’s long-term future.

For the past few months, Mistry has been scouting for a new set of leaders to head both the Indian and European operations. These leadership calls will also be a pointer to the manner in which Mistry’s tenure could unfold in the coming years. Jamshedpur has always been the nerve-centre of Tata Steel’s operations. Typically, the managing director—whether it was Russi Modi, JJ Irani, B Muthuraman or HM Nerurkar—have held sway from there.

Yet today, the 106-year-old firm has clearly outgrown the steel town. Mistry is, therefore, expected to pull back the reins of power to Mumbai. And by all indications, he is also looking at building a new generation of leaders around him to strengthen the foundations of the group. Make no mistake: None of these transitions will be without the usual share of intrigue and high drama. Prince’s story on page 46 takes you straight into the middle of all the action, even as it unfolds. Also, don’t miss our Director-Photography Dinesh Krishnan’s brilliant images from the Kalinganagar site.