Dual Pricing in Diesel a Concern for Oil Companies 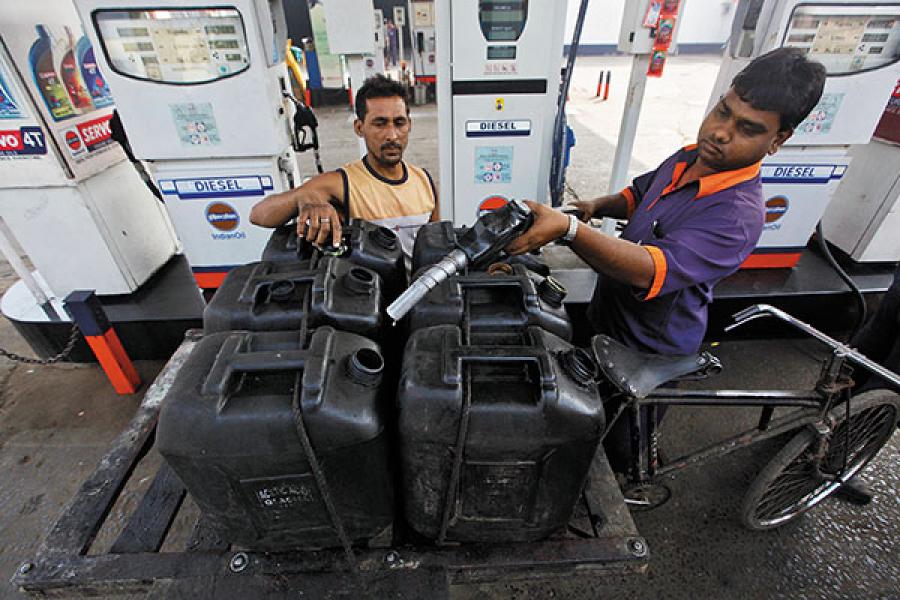 Image: Rupak De Chowdhuri / Reuters
Several bulk buyers have refused to adhere to rules that restrict them to special outlets that sell more expensive diesel and have moved to retail pumps

The dynamics of the Indian oil industry changed overnight on January 18 when the UPA government at the Centre bit the bullet and changed its fuel pricing policy in a desperate attempt to rein in the rising fiscal deficit.

For over a decade, bulk consumers have paid about a rupee less than the price paid by retail customers. This was because oil companies sold directly to bulk consumers from special outlets, and did not charge dealer commissions. When the policy change was announced, they were suddenly asked to pay close to Rs 10/litre more.

The new policy approved by the Cabinet removed the subsidy for bulk customers who buy more than 200 litres at one time, and allowed oil companies to increase prices for retail consumers by 40 to 50 paisa per litre every month. Over the past two years, diesel sales have been galloping towards double digit growth, as has the government’s subsidy burden.

This dual pricing of diesel, in which bulk consumers pay about Rs 8.50/litre more than those tanking up at petrol pumps (retail customers in Delhi pay Rs 48.67 per litre of diesel), spells bad news for India’s largest oil retailer, IndianOil. The company dominated close to three-fourths of the large consumer market, thanks to big buyers like state transport corporations. Now, many of them seem to have flocked to smaller companies—Bharat Petroleum and Hindustan Petroleum—who have reported higher sales at their retail pumps.

Other bulk consumers like the railways and defence forces, who constitute a quarter of the bulk diesel sales, are unable to walk away from IndianOil for logistical reasons. But with private sector oil companies like Reliance Industries and Essar Oil gearing up to pitch for this business soon, there’s going to be cut-throat competition in future. Many annual contracts with large users will be up for renewal in the coming months, and bidding for these will allow the two private oil companies to get their foot in the door. (RIL and Essar Oil had been locked out of sales, both to bulk and to smaller consumers, as they found it impossible to compete with subsidised diesel sold by the PSUs.)

BIG SHIFTS
Dual pricing has also raised the hackles of several oil firm executives. “Managing dual pricing is turning out to be a nightmare,’’ says the executive director of a PSU company who did not want to be identified. Several state transport corporations have obtained interim injunctions from courts, refusing to pay the higher price. Others have simply refused to adhere to the rules that restrict them to special outlets (that sell more expensive diesel) and have moved to retail pumps to fill up.

Oil companies are in an almost schizophrenic situation these days. They are happy that they are being allowed to gradually increase diesel prices at the pump. But they are loath to let go of reliable, long-term customers for whom they have built special pumps and storage facilities over the years. Their relationships with their biggest customers are now strained. For example, the Punjab government directed its state transport corporation, one of IndianOil’s bulk customers, to stop buying the expensive diesel. The buses have instead begun queueing to fill up at pumps on the highways. In an attempt to keep and service its long-time customer, IndianOil has started to keep pumps open at night to allow the buses to fill up. 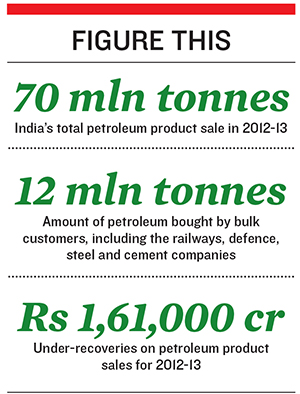 IS IT WORKING?
What lies at the root of the dual pricing dilemma? Oil companies say it is impossible to separate the two supply chains. Government regulations ban the sale of more than 200 litres (in a barrel) to an individual customer at a retail petrol pump. Yet, consumers have been able to find ways to fill up. Several customers with clout in the government, like fisherfolk, went on strike and were able to get the government order reversed for them.

The only hope is that the problem may not last too long. Speaking to CNBC, BPCL Chairman RK Singh said, “The government has allowed us to increase retail prices by 50 paisa every month till their under-recoveries are wiped out. So the situation should stabilise by next year.’’ Under-recovery is a catch-all phrase, unique to the Indian oil industry, which refers to the difference between the pump price and the import-parity price of fuel.

Oil industry analysts say they are not sure how long the price increase will last. For instance, the government did not allow the companies to jack up prices when Parliament was in session in the first half of March. But a hike was allowed when the budget session was adjourned. Oil companies expect large customers to return as and when the differential falls to Rs 2/litre.

But with the entry of the private sector, the dynamics of the industry could change permanently. The government’s attempt to decontrol diesel in 2003 was unsuccessful as it could never summon the political will to go through with it. RIL and Essar Oil have kept part of the network intact, and are now biding their time. Essar Oil CEO LK Gupta says it’s heartening to see retail prices going up finally and that his company’s network of 1,400 pumps is ready for business.

Though the government is heading into the election year, it has so far stood by the plan of gradually increasing diesel prices. The biggest incentive to continue on this path could be the lower fiscal deficit. Oil companies have borrowed close to Rs 140,000 crore in 2012-13 to deal with the under-recoveries. Much of this will be reimbursed by the government. The attempt is to make sure this doesn’t continue to happen.

Tweets by @forbesindia
Letter From The Editor: Cyrus Mistry's Baptism by Fire
What Legends Thought of Examinations