Letter from the Editor: India needs to graduate nearly eight million more students by 2014. And there is no credible plan to fund this phenomenal capacity build-up

For the past few years, I’ve always held the view that education may well be a bigger bottleneck in India’s growth story than infrastructure. But for some reason that I haven’t been able to fathom, the challenges India faces on education seldom receives the kind of attention it deserves. And it is evident from the string of politicians who were picked to head the Union HRD ministry. That’s one of the reasons why I was among the lot who cheered the appointment of Kapil Sibal as the Cabinet Minister for Human Resource Development. 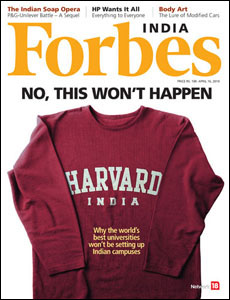 Finally, we had someone who not only had the foresight and intellectual acumen, but also the political will to untangle the complex web of regulations that have kept Indian education tied up in knots. Clearly, under his leadership, we’ve made more progress in less than a year than we have for the past several decades, including last fortnight’s big news: The move to allow foreign universities to set up shop in India. While, as a magazine, we are solidly behind the idea of opening up higher education to greater competition, it’s important to guard against one important myth: That these foreign universities will help solve India’s gigantic higher education challenge.
The sheer size of India’s middle class may be alluring for P&G or Vodafone, but not necessarily for the biggest brands in the global higher education space. So expecting Stanford, Cambridge or Harvard to set up large campuses in India is simply a figment of someone’s fertile imagination. Frankly, our prognosis is that there will be no stampede of any kind. Some lesser known universities may step in, but no one’s quite sure whether their quality will be up to scratch. And if you’re looking for evidence, consider the experience of markets like Israel, Qatar and Dubai. Research done by the Parthenon Group, a global boutique consulting firm that specialises in education, suggests that less than 1 percent of students graduate from foreign universities in any market across the world.

At a conservative level, India needs to graduate nearly eight million additional students by 2014 for our GDP growth curve to keep rising. And as far as we know, there is no credible plan to fund this phenomenal capacity build-up. Our lead essay, anchored by Neelima Mahajan-Bansal and Shishir Prasad, provides a grim reminder of India’s looming higher education crisis.

We’ve still got time to make amends. It starts with dismantling yet another shibboleth: That education should be run only by not-for-profit trusts. Now, here’s my contention: Why not allow some of India’s leading corporations, be it the Tatas, Birlas or even Wipro, to set up for-profit institutions? Many of them are genuinely interested and they’d be a good deal better than the assortment of unscrupulous politicians and dubious entrepreneurs who have used these entry barriers to dish out poor quality education and fleece students. Under the existing model, no corporation can set aside large amounts on education without running into corporate governance issues.

To be sure, this is a burning issue that needs urgent debate. Please read our essay and send us your comments. We’d love to hear what you think.