Finding Draper: Where are the Mad Men?

During my MBA programme, the only course remotely connected to a creative occupation was called Advertising and Sales Promotion Management. As you might have surmised from the deathly title, it didn’t exactly live up to my expectations. But at least it held out hope of a career outside a suit and the chance to infuse every bar of soap with life and imagination. 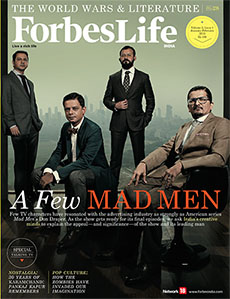 This was in the mid ’90s when options for a management graduate were still rather straitjacketed. The dotcommers were yet to bloom and the few media houses that did hire MBAs did so only for strategy or marketing jobs—not the cool artistic ones. One advertising agency came shopping and quickly left empty-handed. I remember feeling desolate, stuck with a marketing job instead of one that allowed me to doodle genius ideas while dressed in scruffy jeans and checked shirts.

Of course, I determinedly found my way into denims and journalism, and my perception of the ad world became less rose-tinted (it was just another job). The pangs passed. But then, when I put on an episode of Mad Men—the cult American TV show set in Madison Avenue during the ’60s—the wistfulness creeps back. For me, the moral flaws of its lead character, Don Draper, are overshadowed by his dance with words and ideas, the burgeoning significance of the profession. And now, as the show nears its end after a spectacular seven-season run, our cover story reimagines a time when advertising was all dressed up with somewhere really cool to go.

Anjali Thomas spoke to senior members of India’s ad world about the period when originals like Draper ruled the roost, when blatant sexism at the workplace was the norm, and egos were king-sized (that bit hasn’t changed). How much of that was rooted in fact, we asked them. “A fair bit,” Preeti Vyas Giannetti told ForbesLife India. “Yes, there was promiscuity and drunken launches, but there was also passion for the job. These men were personalities who were driven by a hunger to do things, to become trendsetters. But times have changed, and the rules of that decade are no longer valid.” Scarce today are the intense flashes of inspiration that mad men like Draper epitomised.

One could say the same about the Indian television industry, which seems to have lost the narrative mojo of the ’80s, when sagas like Buniyaad, Nukkad, Hum Log and Karamchand had the nation in thrall. But Karamchand himself is hopeful—actor Pankaj Kapur tells Kunal Purandare that a resurgence of story-telling in television cannot be ruled out. Consider the West, where the small screen is spawning big ideas—and otherworldly beings.

As the winter begins to thaw, the undead prepare to rise (particularly on American TV). Zombies, Pravin Palande writes, are creatures whose time has come. The success of TV series The Walking Dead has brought the genre to life (in a sense) and Indian filmmakers too have begun to experiment with these macabre figures that feast on human flesh.

From the gore of otherworldly creatures we move to the gore of history. Nina Martyris reviews Vedica Kant’s India and the First World War, a work that memorialises our country’s grossly unsung role in WWI. “Of all the British colonies that sent up contingents, India’s was the largest,” she writes. “Of the 1.6 million men (soldiers, labourers, porters, bhistis, mule drivers, cooks) who took part in the war, over 70,000 died. The rest returned, transformed in different ways by the crucible of conflict.”

Tragically, strife continues to be a motif of our times. Reminding ourselves of its senselessness seems only appropriate.

To better times, then.