Why calm can conquer and stress destroy

Finding our path to an oasis of calm is a daily endeavour. The routes may differ but the goal is the same: A time-out

Twenty minutes can change your day: This kind of statement typically invites cynicism and a snigger. But in an increasingly perilous world, where bad news comes calling faster than good, I wouldn’t knock it till I’ve tried it. 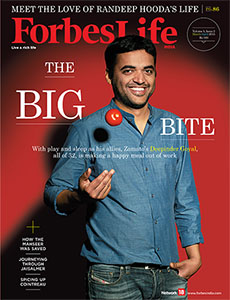 Here’s what I found: Yoga nidra, loosely defined as ‘effortless relaxation’, is the gift you need to give yourself. I was introduced to this simple yogic practice by my instructor, a practitioner of the Bihar School of Yoga, within the first week of our association. “You need it,” she told me, as I sleep-posed my way through a session. “Just twenty minutes of yoga nidra is equal to four hours of sleep,” she said. A few months of integrating it into my incurably insomniac existence later, I am a believer.

Finding our path to an oasis of calm is a daily endeavour. The routes may differ but the goal is the same: A time-out. How often have we been told about the invisible damage that stress wreaks on our systems, and how little do we do to combat it? It is a disgrace, our apathy towards our selves. And anyone who is consciously navigating the chaos of life by using the anchors that calm deserves a hat-tip.

Our cover story, Zomato chief Deepinder Goyal, 32, part of an over-achieving internet brigade, should get at least a hundred hat-tips. Consider his world: The consumer internet space, constantly changing, hyper-competitive. And his platform is India’s fastest-growing and the largest in the restaurant search space. Plus, he is the boss and not the easy-going kind either. He docks Rs 100 from late-comers to work, insists on having the final word on business decisions and is ambitious as hell. But whatever the crisis, he sleeps. Often even twenty hours—his words, not mine—a night. “There are times when s*** hits the fan. But I sleep through these phases. The next day is a new day,” Goyal tells Deepti Chaudhary. He watches movies that “don’t make me think”, otherwise what’s the point, he says.

Goyal, in many ways, is a realistic role model. He is prone to anger, can be demanding and is as flawed as the next guy. In that context, his approach to his job is refreshing and exemplary. “You need Rs 20,000 a month to survive,” he points out. “I can make that money anytime.”

His calm is in direct contrast to the other man profiled in this issue. Actor Randeep Hooda is as intense on screen as he is off it, found Kunal Purandare during a conversation at the Mahalaxmi Racecourse in Mumbai. Softness only creeps into his demeanour when in equine company. Horses for courses, they say, and Hooda’s is one paved with a nonchalant individualism that stems from his small-town beginnings and big-city dreams. Today, even as he wins mainstream appreciation for his role in movies like Highway, his views continue to be singular.

Hooda is also encouraging parents to send their kids horse-back riding this summer, a sport he insists is not as elitist as it sounds. But for those who have travel plans instead, this issue offers a cornucopia of destination ideas. Between the historic treasures of the Thar desert around Jaisalmer and the cobbled trails in and around Genoa in Italy, I am torn—and you will be too.

Yes, hot, horrible summer is coming up but, till then, let the promise of far-off lands keep spring in your step.

Tweets by @forbesindia
Urban Ladder to expand its offerings and footprint
Rahul Mishra, the craftsman