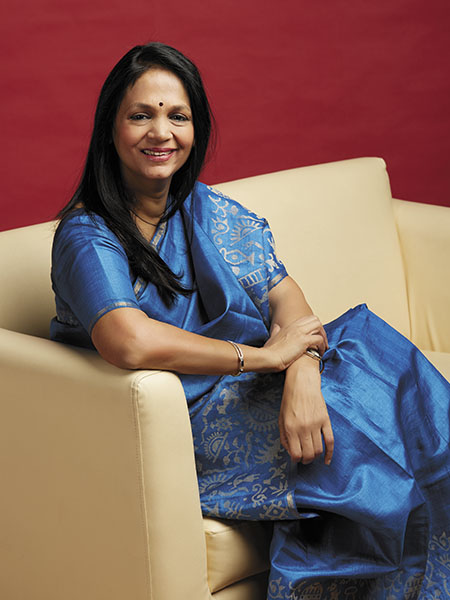 RM Vishakha did not make it to the original shortlist for the post of MD and CEO of IndiaFirst Life Insurance. It was only after Legal & General, a British financial services company and one of the promoters of IndiaFirst (along with Bank of Baroda and Andhra Bank), insisted on including a woman aspirant to ensure gender parity that her name was introduced. Eventually, she bagged the post in 2015.

Since then, the company has produced impressive numbers under her leadership. The life insurer’s APE (annual premium equivalent) in FY17 stood at ₹635 crore, up 47 percent year-on-year. Over the last two years, the company’s profit has increased almost five-fold to ₹35.22 crore.

“Vishakha has utilised her skillsets well to steer the ship in the right [direction] at IndiaFirst,” says Krishna Angara, an independent director on the company’s board and former director of operations at Vodafone India. “She has put the right people in key positions and is a good mentor.”

The IndiaFirst interview episode wasn’t the first time Vishakha faced the brunt of gender discrimination. “A few of the job changes that I have had to make were due to what can be termed as sexual harassment… as per current norms, which didn’t exist before 2013,” she says. “I have even been told that I can be a distraction at the workplace because of how I look.”

However, she has risen through the ranks because of her persistence and ability to adapt to various situations. Author Amish Tripathi, who has worked with Vishakha at IDBI Federal Life Insurance, says despite being the only woman on the business side in the senior management committee, she never expected special treatment. “She was a hard-driving sales head and that made her special,” he recalls.

A chartered accountant by qualification, Vishakha joined New India Assurance in 1987 in Hyderabad as an accountant. She later shifted to New Delhi with the insurance company to further her husband’s job prospects. However, in the era of computers, her role as an accountant became redundant. She moved to sales and “fell in love” with it. Vishakha says her stint in Delhi was responsible for bringing out the “latent aggression” in her.

Vishakha credits her husband and mother for being her pillars of support. “We tend to criticise women who leave their children at home to go to work. I never faced any of that,” she says. Her husband, Rajesh Maheshwari, CEO and president of Suyog Diagnostics, a medical diagnostics equipment distributor, shifted to Mumbai in 2003 when Vishakha was offered a senior role at Birla Sun Life Insurance. “She is a good listener… she takes time to listen with patience before taking a decision,” he says.