EVs are all the rage. Will the charging infrastructure catch up in 2023?

From incumbents to startups, the electric vehicle sector saw phenomenal growth in 2022. Will 2023 see the supporting infrastructure gain pace? 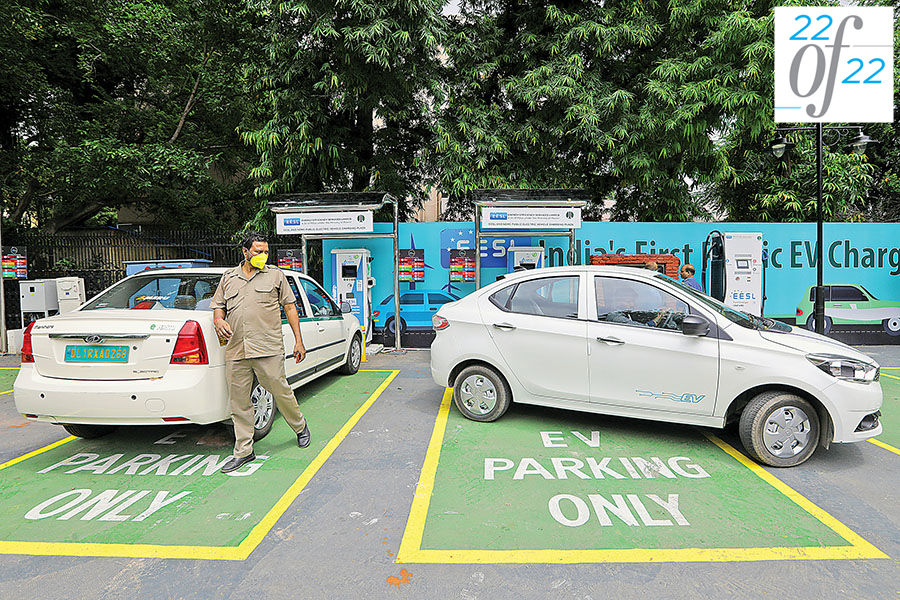 India currently has only 1,742 EV charging stations, a number that is expected to increase to 100,000 by 2027. The country requires around 20.5 lakh units by 2030. Charging stations are key for EV adoption as range anxiety is one of the key hindrances Image: T. Narayan / Bloomberg Via Getty Images

From incumbents to startups, the sector has lately seen phenomenal traction, thanks partly also to the Indian government’s push to have more electric vehicles on the road by 2030, in addition to wider awareness and cost parity. The EV sector penetration in the country currently stands at around one percent and the Indian government wants to push for a sales penetration of 30 percent for EVs in the private car market, with an even greater ambition of 70 percent for commercial vehicles and 80 percent for two- and three-wheelers by 2030.

Rising fuel prices have also played into the wider adoption of electric vehicles. India’s import of crude oil required for vehicular fuel has been increasing over the years and stood at $40 billion in 2017. That number is projected to more than double to $90 billion by 2030 at the current pace. At the same time, battery cost has reduced from $800 per kilowatt-hour in 2011 to $137 per kilowatt-hour in 2020.

At the centre of that revolution, however, will be the growing need to set up charging infrastructure in the country. “Taking into account the current growth trend, it is estimated that there will be 5 crore EVs on Indian roads by 2030,” Gurugram-based market research firm JMK Research said in a recent report. “E-two wheelers alone will account for 70 percent of total EV sales by then on the back of availability of suitable charging options–both home and battery swap; prices of EVs achieving parity with that of ICEs; and their promising use in delivery services as well.”

That means a growing need to quickly ramp up electric charging infrastructure, especially considering that range anxiety continues to be one of the foremost hindrances to EV adoption. India currently has only 1,742 charging stations, a number that is expected to increase to 100,000 units by 2027. India requires some 20.5 lakh stations by 2030.

Of the charging infrastructure, electric two-wheelers are likely to rely on public charging stations for top-up charging only whereas electric three-wheelers are expected to use captive charging stations. “In terms of the type of charging, India’s EV market currently has limited capabilities for fast-charging EVs,” JMK Research says. “However, going forward, public fast charging, complemented by AC chargers of capacity ranging from 3-22kW at workplaces, shopping malls, and restaurants will be needed to support the charging infrastructure in India.”

Also read: Not much to show with scooters, Piaggio wants to win over the three-wheeler market

Already, companies have begun to deploy their own charging infrastructure to meet the growing demand. For instance, the Tata group has set up Tata UniEVerse, an ecosystem that will leverage group synergies, where several Tata companies have come together to provide EV solutions to consumers. The company has partnered with Tata Power to provide end-to-end charging solutions at home, the workplace, and public charging facilities. Under this partnership, the company has installed fast-charging stations in metros, including Mumbai, Delhi, Pune, Bengaluru, and Hyderabad, in addition to chargers on highways. So far, Tata Power has set up 1,000 EV charging stations across India in some 180 cities.

The company has also tied up with Tata Chemicals in its attempt to build a component supplier ecosystem and manufacture lithium-ion battery cells, in addition to looking at active chemical manufacturing and battery recycling.

Last year, Ola, which forayed into electric vehicles in 2021, said the company is planning to set up its Hypercharger Network, which it claims will be the widest and densest electric two-wheeler charging network in the world, with more than 100,000 charging points across 400 cities. In the first year, Ola is setting up over 5,000 charging points across 100 cities in India, more than double the existing charging infrastructure. The company is also spending some $2 billion over five years for that.

“There has been little movement on establishing charging stations under the FAME schemes and by key industry players as of now,” JMK Research said in its report. “However, the target for 2030 seems achievable considering that the establishment of 5 lakh charging stations is already in the pipeline by various charge point operators as well as oil marketing companies in addition to various centre and state-led initiatives. Andhra Pradesh and West Bengal, for instance, have laid down targets for establishing 1,00,000 charging stations each by 2024 and 2026 respectively.”

That means the groundwork seems on track for now, and 2023 will most likely be a crucial year for India’s EV revolution.