Not much to show with scooters, Piaggio wants to win over the three-wheeler market

The Italian automaker is throwing its weight behind all three categories of three-wheelers, including electric, ICE and CNG, as chairman Diego Graffi says that electric has given a different perspective to the business 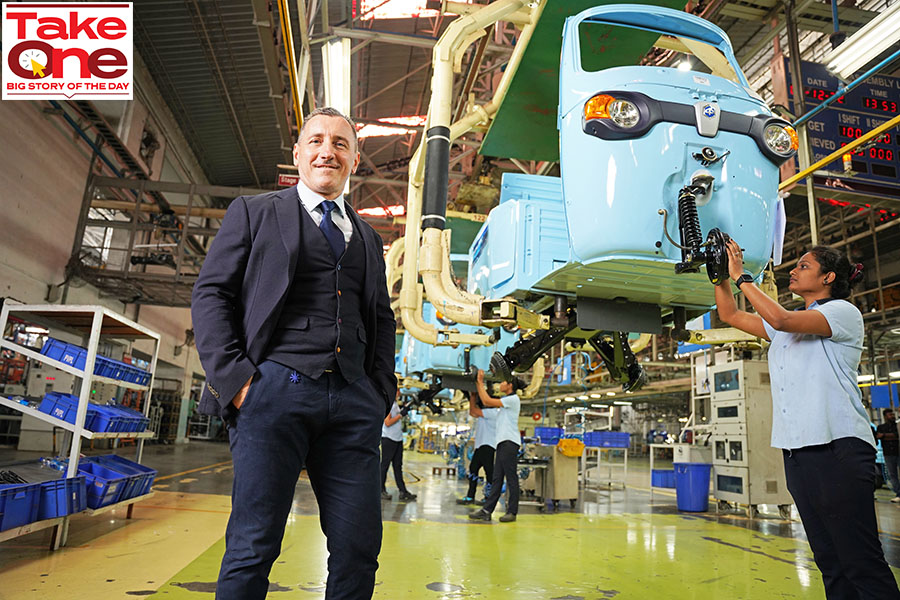 On the outskirts of Baramati, some three hours from the automotive hub of Pune, as many as 80 women take to their shifts daily, working on the shop floor and putting together three-wheelers at breakneck speed at the Italian automaker Piaggio’s factory. Their internal target is to churn out some 100 electric three-wheelers a day, and on most days, that target is met.

These women, mostly aged between 18 and 22, have only been hired in recent years, and for now, are largely limited to the process of assembling electric three-wheelers. Of course, in the years to come, they are likely to join their male counterparts in putting together everything from electric to internal combustion engines (ICE) and CNG-based three-wheelers that are being built at Piaggio’s manufacturing plant in Baramati.

“Of course, it wasn’t an easy task to pull off, especially since it’s only men who have been employed at factories for so long,” Pooja Bansal, the CHRO at Piaggio tells Forbes India recently. “These women are mostly from surrounding areas or states such as Odisha and Chhattisgarh.”

In many ways, that change underway is reflective of what Piaggio is attempting to do in the Indian market after setting up business in the country some two decades ago. While business has been rather mediocre with the occasional spurt in two-wheelers and three-wheelers, Piaggio still has a Herculean task when it comes to the domestic market.

“The kind of investment we have done in the last four years is the highest in the history,” says Diego Graffi, the chairman and managing director of Piaggio India. “Still a lot of changes are required, but you know at least we have identified what we have to change.”

The company currently has a 0.19 percent share of the domestic two-wheeler market while its three-wheeler business corners a seven percent market share, according to the latest data from the Federation of Automobile dealers’ Association (FADA). While it retains the second spot in the three-wheelers market, the difference with the market leader, Bajaj is stark with a nearly 30 percent deficit in market share. In November this year, Bajaj sold 26,652 three-wheelers in the country, compared to 5,364 vehicles sold by Piaggio.

A significant amount of focus in recent months has largely been on the three-wheeler side of the business, where the Ape Brand, through its multiple offerings across internal combustion engines, CNG, and electric have helped the brand cement its position as one of the country’s top three-wheeler makers.

Early in December, the company also launched two fixed battery electric vehicles (EVs) – the E-City FX Max passenger and E-Xtra FX Max cargo in a segment that the company claims to have taken to becoming market leaders. In October, according to Piaggio, the company commanded 50 percent of the market in the electric three-wheeler cargo market. 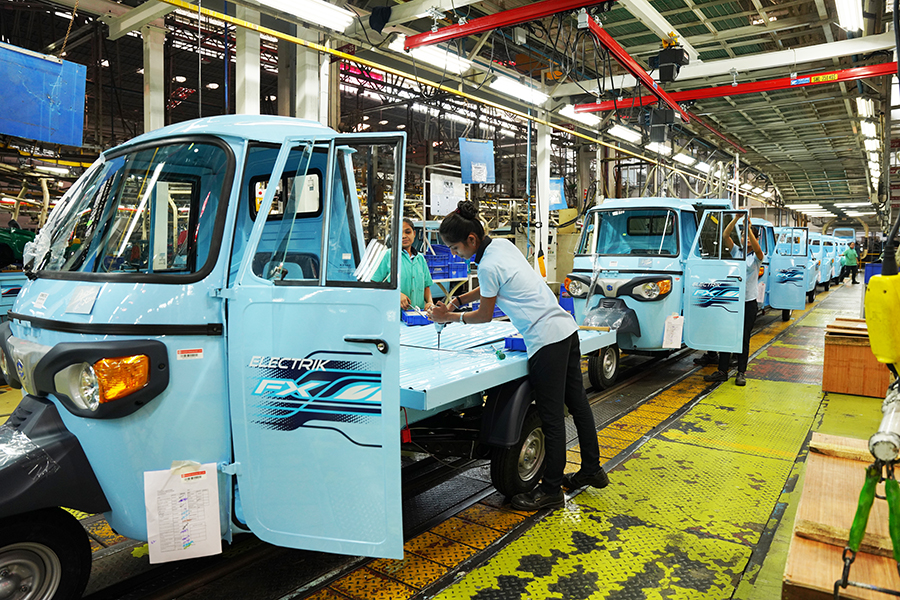 Women are working on the shop floor and putting together three-wheelers at breakneck speed at the Italian automaker Piaggio’s factory. Image: Mexy Xavier

“2019 was a great year,” Graffi says. “Sales was around 6.5 lakh. But, with the pandemic, overall demand took a big hit.” Additionally, the shift to BS6 also meant that the demand quickly began to shift from diesel, where Piaggio had a significant market share, to CNG. This year, Graffi reckons the three-wheeler segment to close at some 3.5 lakh, far lower than the peak in 2019.

In the meantime, however, electric three-wheelers in the country have also begun to pick up steam. “The 2W [two-wheeler] and 3W [three-wheeler] segments will be the vanguards for EV adoption, achieving 40 percent–45 percent penetration by 2030,” a recent report by consultancy firm, Bain & Company says. “This is driven by several factors, including highly competitive total costs of ownership (TCOs), limited need for public charging infrastructure given the adequacy of home charging for daily use, investments in building compelling product offerings with comparable performance to ICE vehicles, and early adoption by delivery and logistics fleets.”

Over the next few years, Graffi now reckons that the sales of three-wheelers will grow to some 500,000 units a year, still lagging the record year in three-wheeler sales. In contrast, with Covid-19 creating a rampant need for personal transportation, the country’s four-wheeler market is expected to have a record year in FY23.

“I think that a lot of customers that we are traditionally buying three-wheeler have exited the market,” says Graffi. “During these last three years, a lot of people have decided to change professions. So, I doubt that this kind of demand will come back.” Yet, Piaggio is throwing its weight behind all three categories of three-wheelers including electric, ICE, and CNG.

That’s also partly because of the growing demand in the B2B segment, helped largely by the growth of ecommerce. “Electric has given a different perspective to the business of three-wheelers,” says Graffi. “Until a couple of years ago, 90 percent of the business was B2C and only 10 percent was B2B. Now we see that increase in demand and interest coming from B2B, especially the ecommerce companies. Before, they were deploying mini diesel trucks.”

While there is massive growth in the electric three-wheeler business, Piaggio also doesn’t want to shy away from manufacturing diesel and petrol vehicles. “My idea is a little bit different and that is also what is driving our philosophy in terms of product development,” says Graffi. “We have converted to a full agnostic player, in the sense that we do not want to drive what customers must buy. We want to provide customers with the best solution that is suitable for their needs.”

Also read: CNG Vehicles: The Answer To A Quicker Transition Towards Green Mobility

Much of that is because of a firm belief that the three-wheeler business will be equally divided between ICE, CNG, and electric vehicles. “The customer of three-wheeler is not one,” says Graffi. “There are multiple profiles.”

“High upfront cost of E3Ws [electric three-wheelers] is concerning for low income consumers, who are the primary buyers of this segment given they are most popular for public transport and cargo,” Gurugram-based consultancy firm, JMK Research, said in a report. “In comparison to E2Ws [electric two wheelers], however, the higher costs of E3Ws are a concern for their owners who have low disposable incomes. This could lead to E3Ws’ low adoption rate in the coming years.”

In October this year, Piaggio says that the company’s electric three-wheelers accounted for about 50 percent of the overall three-wheeler sales, with more than 70 percent in the L5 category. “To be honest, we were not expecting to reach this level of sales so fast,” Grafi says. “In January, we started with 250 vehicles, and we are touching this 2,000 this month. Going forward, what can happen? We expect to grow further, not at the same rate, but at least in the range of another 50 to 70 percent on average.”

In the process, the company, with over 1,000 touch points across the country, wants to return to a dominant position in the diesel category, which it held until 2019. “I'm quite sure that we can go back to 50 percent plus or market share. We are ranging between 35 percent and 40 percent now,” Graffi says. Across the CNG category, where it is self-admittedly a follower, the company has been introducing models that offer better mileage, as customers look for alternatives to diesel and petrol engines.

Also read: Electric Vehicles: From transition to transformation in 3 steps

That also means a renewed focus on the two-wheeler business where the company has struggled in the past. “I'm always telling my team that we need to change or die,” Graffi says. “It happened to multiple multinational players that came to India thinking that it is easy because everybody is making business and then after three-four years, not by census, left India. So, if you are a mono product, mono business and you are focusing only on that business, it will become difficult for you to earn.”

That means investments into the electric ecosystem, particularly swappable batteries and technologies that can give better range. “The business that we are developing with Vespa is not yet comparable to the potential that the brand has in it,” says Graffi. “There are still gaps that we need to cover and cover quite fast. EV is an area in which we have still a lot to learn because it’s a new ecosystem.”

Also read: Ola Electric Wants To Disrupt India's Car Industry. Does It Have What It Takes?

For years now, India’s consumers have been wary about embracing EVs despite a mammoth push from the government. India is a signatory to the Paris Climate Agreement, which means that the country needs to reduce its carbon emissions by around 35 percent of its 2005 levels by 2030. The government has tried everything—from tax cuts to manufacturing incentives in the automobile sector—to kickstart an EV revolution in the country.

The EV sector penetration in the country currently stands at around one percent and the Indian government wants to push for a sales penetration of 30 percent for EVs in the private car market, with an even greater ambition of 70 percent for commercial vehicles and 80 percent for two and three-wheelers by 2030.

For now, Piaggio and Graffi are gearing up for the next phase of the Italian automaker's play in India. All it wants however is consistency in policy. “All companies in India had to invest huge amounts of money and to recover those investments, you need to have consistency at least for some certain period,” Graffi says. “You cannot keep on changing and invest in something new. So what I would hope is that, at least for the next three to four years, there is the stability of environment policy, homologation norms, which will give confidence.”